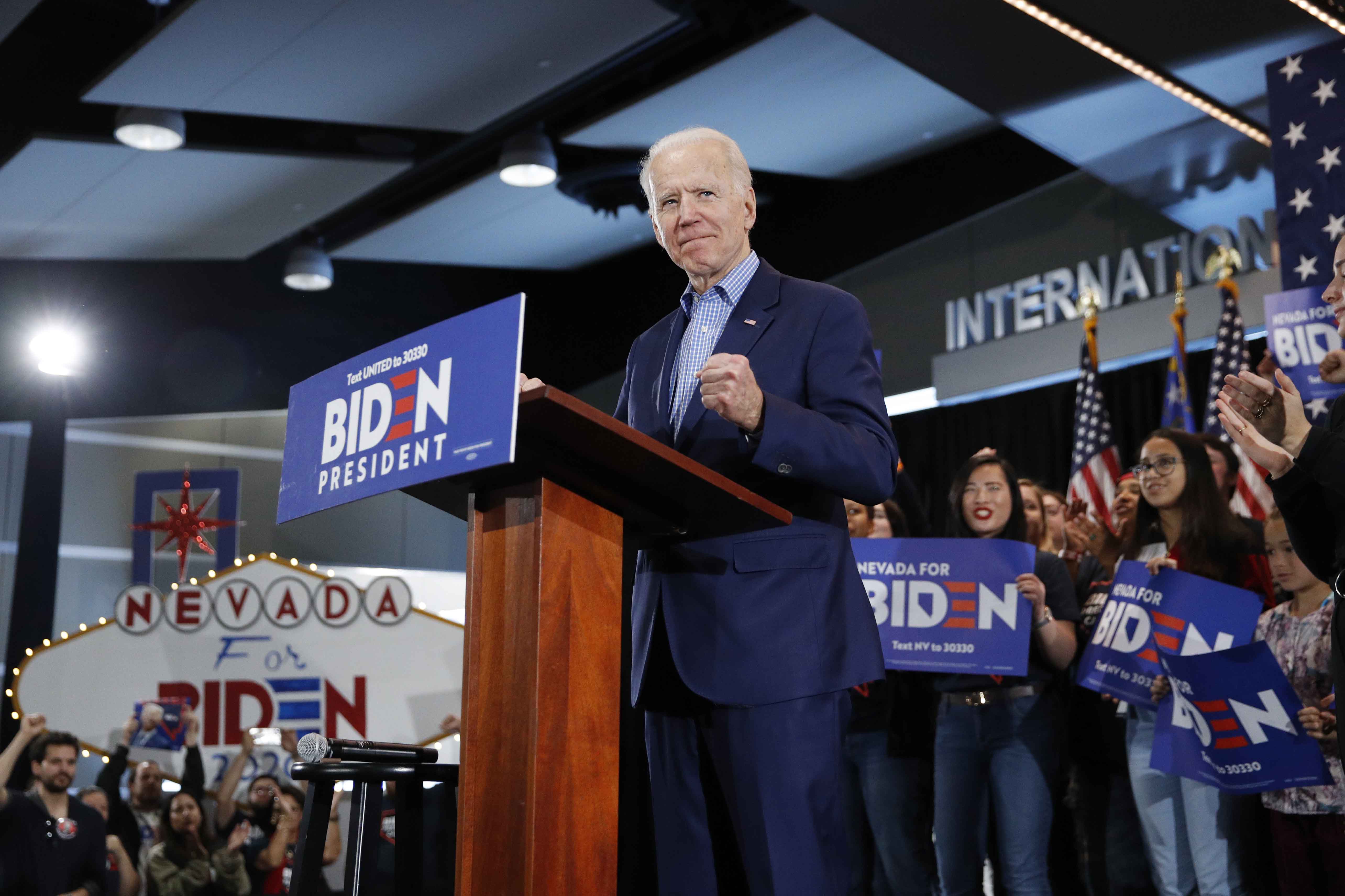 At one point, a member of the crowd yelled that the 77-year-old was “the comeback kid!”

Moments before the speech, Biden campaign manager Greg Schultz said on Twitter that “based on our internal data, Biden will come in a strong second tonight in Nevada” because of robust turnout among African Americans, caucus-goers older than 65 and those who oppose Medicare for All, Sanders’ signature plan.

But Biden’s declaration was premature, according to Pete Buttigieg’s campaign, which projected at one point that the former South Bend, Ind. mayor was in second. Biden’s lead, however, grew over Buttigieg as the night wore on.

In his caucus night speech, Buttigieg also drew a far-sharper contrast with Sanders, calling him out by name and accusing him of leading “an inflexible, ideological revolution that leaves out most Democrats, not to mention most Americans” that wouldn’t change “the toxic tone of our politics.” Sanders surrogates fired back at Buttigieg for talking so tough when he just got whipped.

“I ain’t a socialist. I ain’t a plutocrat,” Biden said, referencing Sanders and billionaire Mike Bloomberg.

The back-and-forth between Sanders and Buttigieg is what Biden wants in order to appear above the fray as he heads into South Carolina’s Feb. 29 primary, a must-win election for the former vice president. But Biden’s big losses and Sanders’ big wins have led to deep potential cracks in Biden’s South Carolina firewall.

“We’re gonna win, we’re gonna win in South Carolina,” Biden said Saturday. “And then Super Tuesday and we are on our way!”

For months, Biden’s campaign has been predicated on a big South Carolina win that would catapult him into the March 3 Super Tuesday states and beyond. But his campaign once predicted he would win at least one of the three other early states, and he failed to do it each time.

The Nevada loss to Sanders also contradicted the Biden campaign’s longstanding claims that the Vermont senator would struggle, compared to Biden, in a state with a large proportion of non-white voters. Polls and preliminary caucus results indicate Sanders won the biggest share of non-white voters, particularly Latinos.

When Biden first got in the race, he made the argument he could win white working-class voters, too. But he began to qualify that statement after losing in heavily white Iowa and New Hampshire.

“His theory of the campaign is he can win Wisconsin, Michigan and Pennsylvania and that he could get the white vote there that went for Donald Trump,” said John Coleman, a 62-year-old African-American voter, told POLITICO at his caucus site Saturday. “But we just went through these two states with all these white voters and he came in, what, fourth in Iowa and fifth in New Hampshire? He can’t get the white vote there; why is he going to win it in other states?”

While it’s true that Biden enjoyed strong African-American support in Nevada and can expect it in South Carolina, the skepticism from black voters like Coleman isn’t limited to South Carolina, where polls show the race has tightened with Sanders.

Biden flew to South Carolina on Saturday night to begin campaigning for the entire week there. Sanders, in contrast, is better-funded and has lower expectations about winning South Carolina as he focuses on winning the mega-states of California and Texas on March 3.

If Biden’s campaign in Nevada is any measure, he’ll likely focus more on turning out black voters over Latinos. In the week Biden spent in Nevada, he went to numerous African-American events and held only one that overtly appealed to Latinos.

In the run-up to South Carolina, where more than two-thirds of the primary electorate is black, Biden will lean into his time as vice president to the nation’s first African-American president, Barack Obama. Biden on Saturday night made sure to mention his link to Obama, as well as a report that Sanders once considered primarying the first black president.

“I was proud to have run with Barack Obama,” Biden said. “I’m proud to still be his friend. And I tell you what? I promise you, I wasn’t talking about running a Democratic primary against him in 2012.”