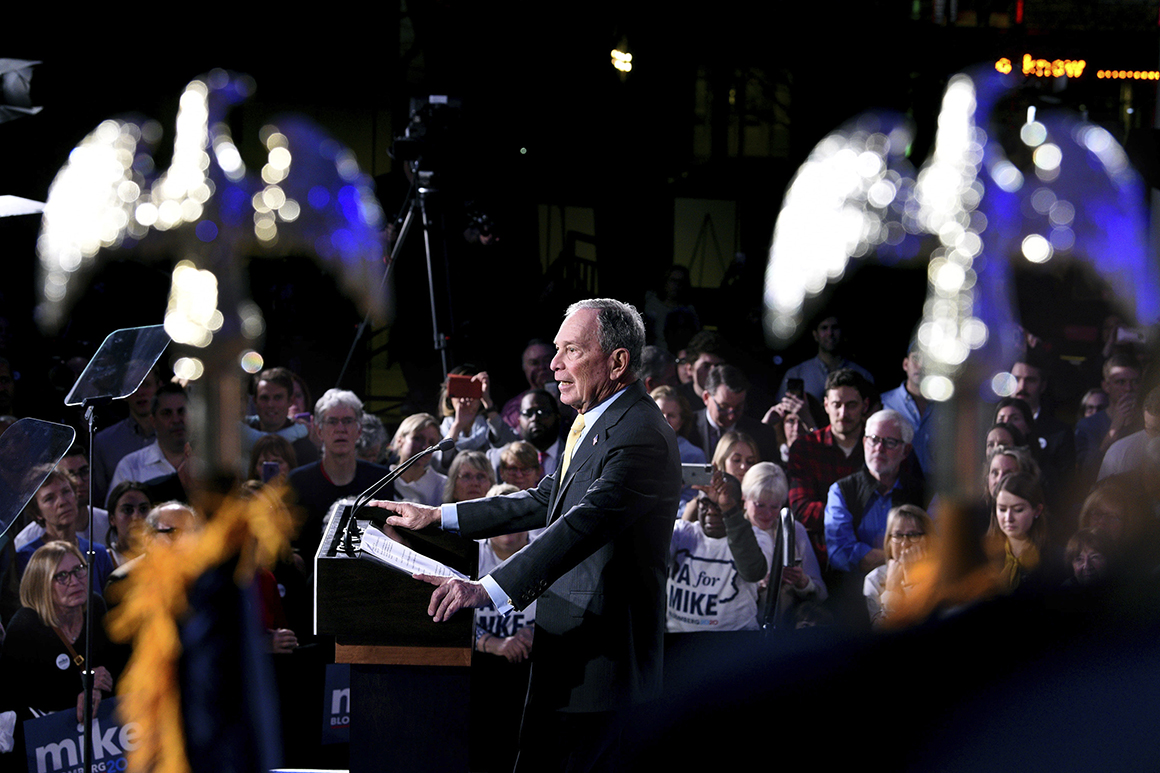 “There would’ve been a political price to pay for saying you were not going to debate. Whether that price is bigger than the price that he may have paid for debating in that first debate, I don’t know,” said one source, who would only speak on condition of anonymity.

As he got his footing Tuesday, his team members began texting each other, indicating satisfaction with the outcome. They are now ramping up their get-out-the-vote efforts in Southern states that vote on Super Tuesday, with events planned in Texas, Tennessee and Alabama.

“We think we’re well positioned to spend the next five days doubling down on the Super Tuesday states, where we’ve already built infrastructure and invested time and resources in telling voters about Mike’s record of accomplishment and ability to get things done,” campaign spokeswoman Julie Wood said.

Bloomberg managed to climb into a tie with Sanders in Virginia, a tie in Oklahoma with Biden and is leading in Arkansas, polls show. Yet there are rising fears among his aides and allies not just of a Sanders wipeout, but a Biden comeback if the former vice president does well in South Carolina on Saturday. Currently Bloomberg and Biden are running neck-in-neck in Southern states with large black populations.

It isn’t looking good for Bloomberg everywhere else.

He has considerable ground to make up to stay competitive in the overall delegate count despite flooding the states with nearly $200 million in TV ads. In public polling averages, the former New York City mayor is running third in North Carolina, sixth in Minnesota and far back in the two states with the biggest delegate prizes.

In Texas, Bloomberg lags far behind Bernie Sanders and Joe Biden, who are tied at 20%, and five points behind Elizabeth Warren, who is in third at 17%, according to a University of Houston poll released Monday. The survey showed Bloomberg in a virtual tie with Pete Buttigieg, who has been outspent in the state by more than $50 million.

Bloomberg’s failure to break through in California, despite spending more than $60 million in the state on advertising, is another ominous sign for the multibillionaire. Sanders is expected to coast in California, where he’s spent considerable time and resources since his loss to Hillary Clinton there in 2016. He’s doubling his rivals in polling averages, and several of them are struggling to break the 15% threshold to win statewide delegates.

If Sanders can duplicate his strength in Nevada among Latinos and black men, he would broaden his base even further. A commanding victory there could make Sanders’ delegate lead impossible to match.

“I think Bernie is going to put up a big number in California and he becomes very hard to stop because of the decisiveness and the division of the primary,” said Doug Herman, a Democratic strategist based in Los Angeles.

Bloomberg is dispatching aides and surrogates to slam Sanders in media appearances as an ineffective ideologue. And in Tuesday’s South Carolina debate, Bloomberg interrupted Sanders in the opening minutes, using a discussion about the economy under Trump to tear into both men.

“Senator! Senator!” Bloomberg said, taking a more aggressive tact than he did in Las Vegas. “Vladimir Putin thinks that Donald Trump should be president of the United States. And that’s why Russia is helping you get elected — because you lose to him.”

In his online store, Bloomberg has started marketing new hats to “CAPitalists” that say “NOT A SOCIALIST.” On the back, the hats are stamped, “BRING IN THE BOSS.”

Merch watch: Bloomberg w/ a “not a socialist” hat
they are marketing it “for our #CAPitalist friends”
……………. pic.twitter.com/drY2698ogD

It has been just a week since Bloomberg’s campaign circulated a memo arguing that Sanders is poised to leave Super Tuesday with a 400-plus delegate lead over his next-closest opponent, whom they claimed would be Bloomberg. Top Bloomberg advisers Mitch Stewart and Dan Kanninen wrote that it was a three-person contest between Sanders, Bloomberg and Trump, and effectively called on Biden, Buttigieg and Amy Klobuchar to drop out.

Bloomberg’s efforts to narrow the focus to Sanders is complicated not just by his shaky performances but also the nature of such a large field. Biden, by winning South Carolina convincingly, could fundamentally change the race.

Bloomberg has resisted putting anti-Sanders TV ads on the air, choosing for now to stick with ads that make an affirmative case for himself. Bloomberg aides said he still must make sure voters are learning about him — and that it’s unclear that merely targeting Sanders with attack ads would cause more people to back Bloomberg.