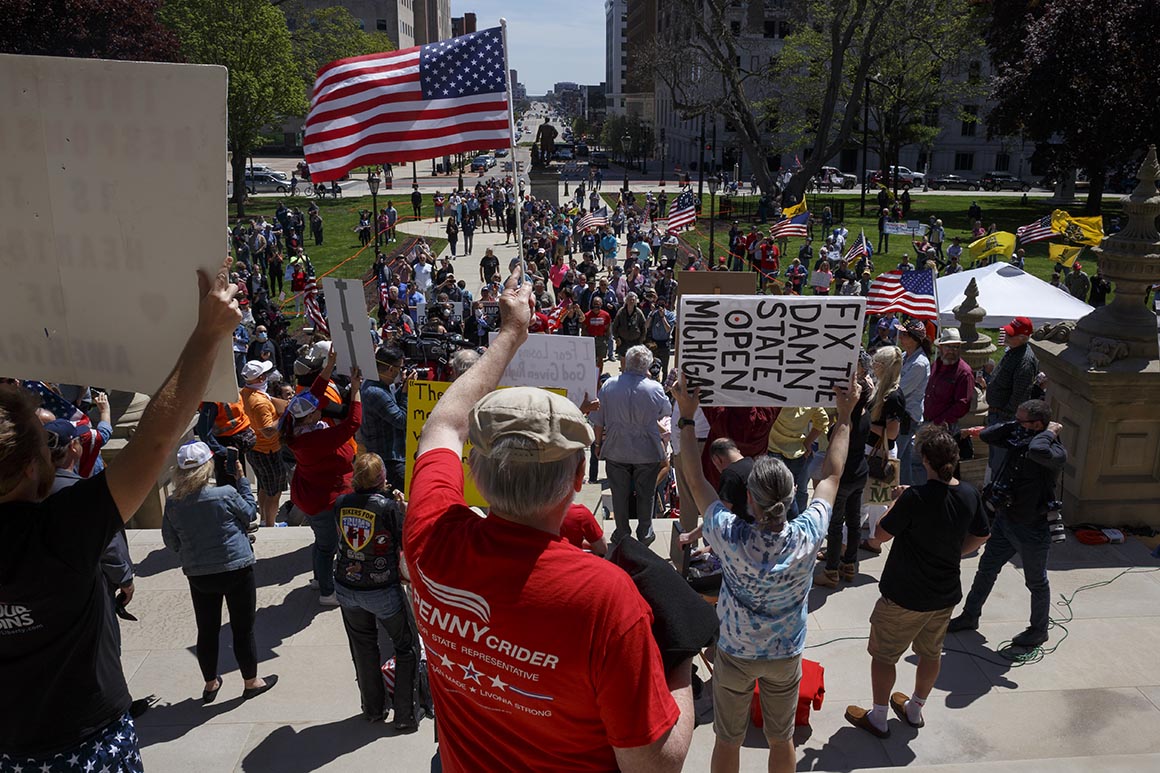 “That wasn’t part of the deal — people lost jobs,” he said, noting Floyd had lost his job at a restaurant during the shutdown. “People weren’t able to say goodbye to sick loved ones or host funerals.”

Of course, the two protest movements have come at different points during the pandemic. The first lockdown protests appeared in mid-April, when Covid-19 outbreak was peaking. Stay-at-home measures were significantly stricter and hospital systems were in danger of becoming overloaded. Some weeks, officials were encouraging people to not even leave the house if possible.

Meanwhile, the recent police brutality protests gathered steam the weekend many cities began lifting their stay-at-home restrictions, citing a sustained downward trend in cases. Scores of businesses have been allowed to reopen under social-distancing measures. Additionally, many of the protesters have been wearing masks, while some of the marchers have tried to social distance.

And, of course, public health experts are not backing off of their stance that a mass gathering of people will likely lead to more coronavirus cases. Some public health specialists argue conservatives are making a disingenuous comparison between two events that have little in common. They wonder where the conservative anger was about protesters violating government orders in April.

But Tom Nichols, a senior advisor to Project Lincoln, a group of high-profile conservative operatives opposing Trump, still insisted the perception is damaging to liberals. Conservatives have latched on to comments from prominent public health leaders who have argued the risks of not protesting systemic racism in this moment exceed the harms of the coronavirus.

“The liberal counterargument is that, ‘This is important enough,’ which is a political argument, not a scientific or medical argument,” he said. “It’s just another way of saying, ‘Your First Amendment protest was wrong, but mine is right.’”

Conservatives are now watching to see whether the Floyd protests actually result in a coronavirus case spike. If they don’t, the rise could bolster conservative insistence that lockdowns were too draconian and resulted in unnecessary economic damage. But if cases don’t rise, conservatives are also ready to argue public health officials and politicians were ready to disregard their own scolding for political expediency.

“Right now it looks like a sham,” Miller said. “People feel conned. And they should.”

While plenty of conservatives took swings at those protesting for not observing social distancing — engaging, particularly, in the act of mask-shaming — what ticked conservatives off most was what they said were examples of public officials encouraging people to march.

High-profile conservatives, of course, had plenty to say about the rights of their citizens to protest, but mainly did so through the media and rarely joined the marches. Michigan Gov. Gretchen Whitmer, a Democrat who became a national figure for standing up to armed protesters objecting to her strict lockdown, was recently photographed standing extremely close to protesters.