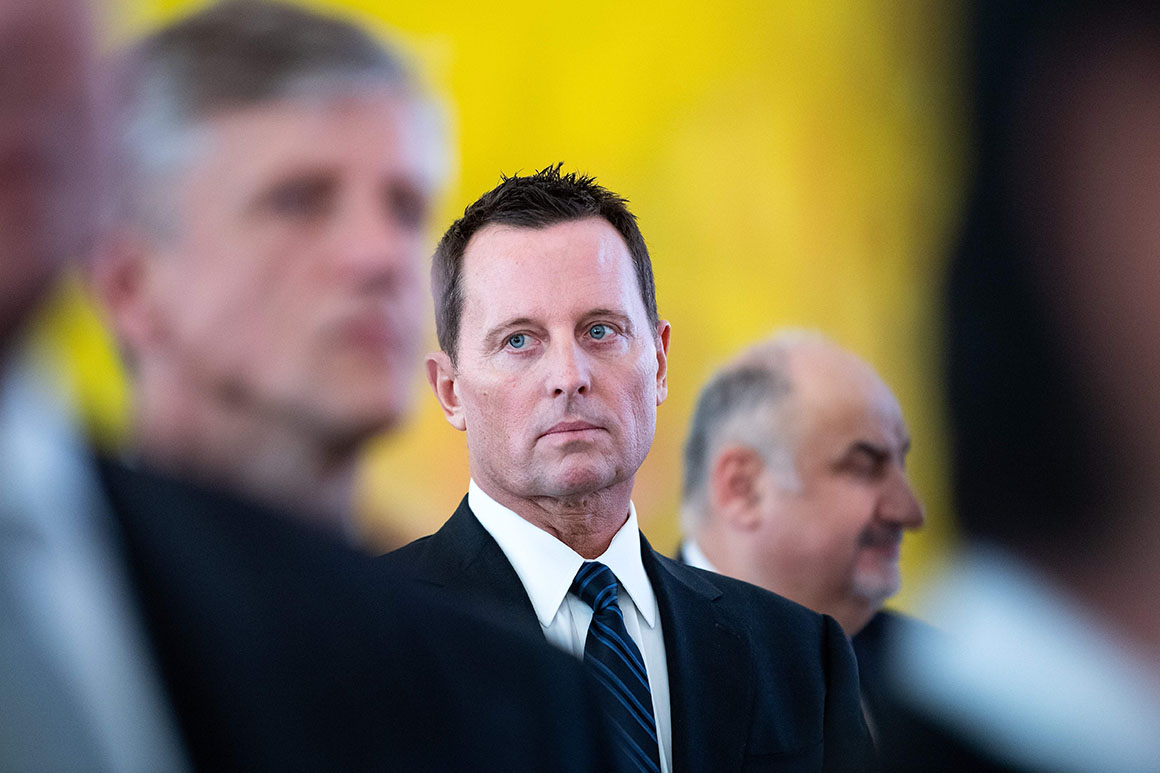 But Grenell’s sharply worded missive is not responsive to any of Schiff’s requests for details about the acting intelligence chief’s efforts to remake aspects of the intelligence community while serving in his role. Schiff said wholesale changes to the operation of the crucial national security apparatus would be inappropriate without a Senate-confirmed leader in place. He asked for details about the changes Grenell has reportedly imposed, as well as justification for the decisions.

“President Trump did not nominate you for confirmation as permanent DNI, and it would be inappropriate for you to pursue any additional leadership, organizational, or staffing changes to ODNI during your temporary tenure,” Schiff wrote in an April 7 letter.

Grenell is seen as a diehard Trump loyalist, and his installation as acting DNI came amid Trump’s fury at intelligence community leaders for their role in the investigation of the Trump campaign’s contacts with Russia in 2016, as well as their handling of the evidence that Trump pressured Ukraine to investigate his political adversaries, including former vice president Joe Biden.

Since Grenell’s appointment, other senior DNI officials have been pushed out or resigned, a high-level personnel shift that has accelerated as Trump tightened his grip on the intelligence community in the aftermath of his Feb. 5 acquittal in the Senate’s impeachment trial. Trump’s abrupt removal of Atkinson earlier this month has left the agency without any Senate-confirmed officials in its leadership ranks. In his letter, Grenell attributed the shakeup to his efforts to implement recommendations from career officials.

“It is my duty to listen to these ODNI career employees who have ideas on how to improve the work we do for the American people,” Grenell wrote.

In a statement Tuesday, Schiff ripped Grenell’s letter as insufficient and unresponsive.

“In his letter, Acting Director Grenell did not respond in any way to our oversight requests regarding the decision to fire the IC IG, sudden staffing changes at the NCTC, and his pursuit of structural and personnel changes at the ODNI without the approval of Congress,” Schiff said in a statement. “And the Acting Director failed to respond to important questions about whether [DNI inspector general Michael Atkinson] was investigating matters that may go uninvestigated as a result of his firing by Trump. The simple fact he was not willing to respond to a reasonable request from his agency’s oversight committee raises new basis for our concerns, particularly given this Administration’s history of covering up blatant misconduct.”

“The Office of the Director of National Intelligence owes us, and the Senate as well, answers to these questions,” Schiff continued, adding. “We remain ready to work with ODNI to ensure compliance with our oversight requests, consistent with its legal obligation to keep the Committee fully and currently informed of its activities.”

Amid growing alarm over these changes in Congress, Schiff in his April 7 letter also asked Grenell for confirmation that Atkinson was never prohibited from conducting any investigations or audits before he was ousted. He also asked Grenell to certify that he would not allow any agency officials to be retaliated against for perceived disloyalty to Trump, particularly if they share evidence of misconduct to Congress.

Schiff also asked for details about whether any agency officials were blocked from sharing candid assessments with Congress about election security and potential foreign efforts to undermine the integrity of the 2020 election. He cited reports that “one or more members of your staff” might be interfering with the evidence provided to Congress.

Grenell rejected Schiff’s characterization and said he felt “compelled to defend these career officers from unsubstantiated indictments of their motivations and judgment.”

“Many are offended by the accusations that they did not share unvarnished assessments,” Grenell said, asking Schiff to provide more evidence of his assertions.

Grenell also told Schiff to stop treating his committee’s relationship with the intelligence community as “that between a hedge fund and a distressed asset.” And he needled Schiff for sending the letter without a Republicans co-signer.

Schiff and his committee’s top GOP lawmaker, Rep. Devin Nunes (R-Calif.), have had a toxic relationship in recent years, with Nunes emerging as one of Trump’s fiercest defenders in Congress while Schiff ramped up investigations into Trump’s conduct and ultimately led the House’s effort to remove the president from office.

“I strongly agree with your statement of a bipartisan legislative commitment to the IC,” Grenell wrote. “I would hope to see this commitment reflected on the signature line of your future letters.