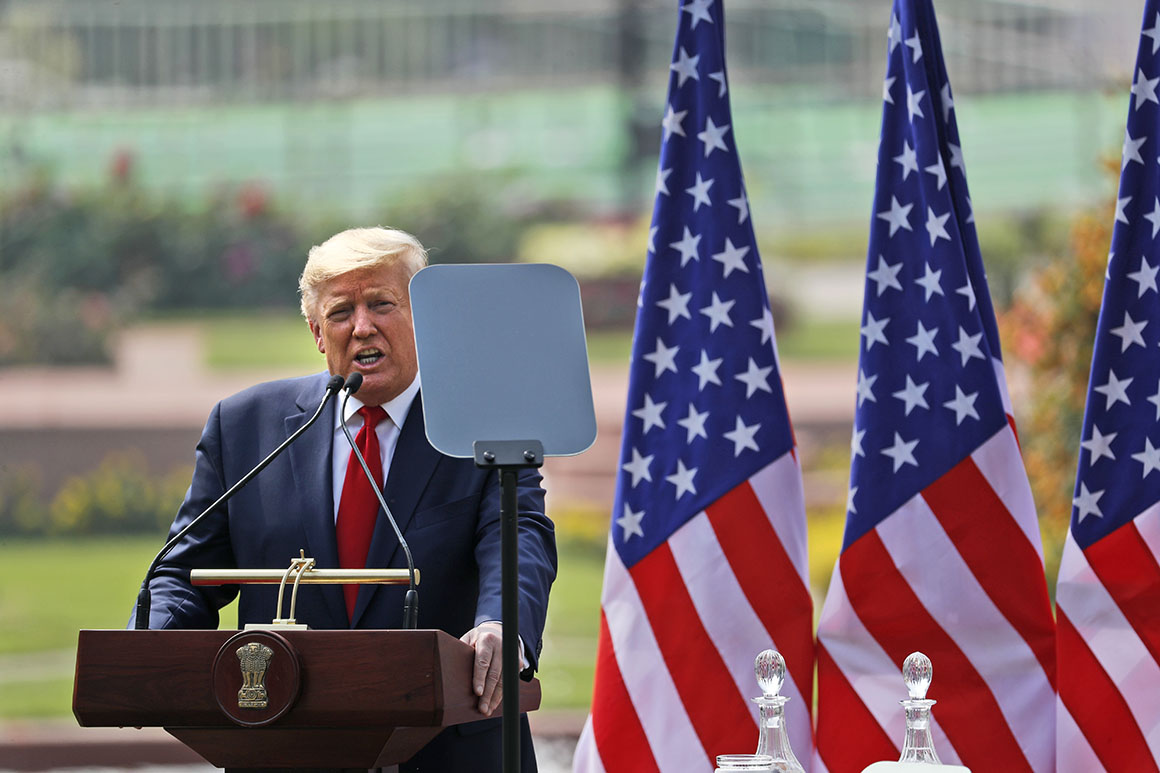 It’s a pitch that Trump will soon be making to voters, some of whom have been hurt by rising prices after three years of trade disputes with countries across the globe: Even though there may not be a deal yet, something great is on the horizon.

“He said he wouldn’t sign bad deals,” said an outside Trump adviser.

The pattern has played out in several trade wars Trump has launched during his time in office. The president ratchets up pressure, then either strikes a minor deal or argues he must hold out for a better one. It happened most recently with China. After slapping tariffs on the country and calling them an “enemy,” Trump struck a phase-one deal that unwound a portion of the tariffs while leaving other major issues unresolved. Trump has also hailed trade deals with Mexico, Canada, Japan and South Korea.

The strategy is important as Trump enters 2020 trying to sell the electorate that he deserves to be reelected over his handling of the economy.

“The trade and economic relationship with India is critically important to the United States, and I think also access to the United States market is critical to the Indian government,” said a senior administration official. “We do want to make sure that we get this balance right. We want to address a bunch … of concerns, and we’re not quite there yet.”

While Trump allies do worry that tariffs could put a dent in the economy, so far, they say, several important economic indicators, like the stock market, have stayed relatively strong.

In the days before the trip, Trump’s team had indicated that the president would sign a deal in India to address recent economic disputes between the two countries, caused, in part, by steps Trump has taken.

Yet after a day of bilateral meetings Tuesday, Trump and Modi, who share similar protectionist policies on trade, agreed their teams should continue to negotiate over what the president vowed would be a “fair and reciprocal” deal, even as tariffs remain in tact.

“Our teams have made tremendous progress on a comprehensive trade agreement and I’m optimistic we can reach a deal that will be of great importance to both countries,” Trump told reporters, standing next to Modi outside Hyderabad House, a government building in New Delhi.

Trump, accompanied by First Lady Melania Trump, arrived in India Monday for the quick but long-anticipated trip to strengthen ties between the two nations. The president headlined a massive political-style rally with Modi in his home state of Gujarat and paid a private visit to the Taj Mahal Monday before arriving in New Delhi Tuesday.

Trump was feted at an elaborate outdoor welcome ceremony Tuesday at the grand brick Rashtrapati Bhavan presidential palace. Booming cannons sounded as his motorcade arrived, led by mounted guards wearing long red coats and blue and gold turbans. Later, the president and first lady paid their respects to Mahatma Gandhi, scattering five handfuls of pink rose petals on the memorial at Raj Ghat, where the independence leader was cremated after being assassinated in 1948.

The two countries on Tuesday also announced a series of defense agreements, reaffirming America’s role as one of India’s top arms suppliers. India agreed to buy advanced military equipment, including more than $3 billion for Seahawk helicopters made by Lockheed Martin and Apache attack helicopters made by Boeing.

Days before leaving for India, Trump had dampened expectations that a trade deal was forthcoming. He stressed that India, the world’s fifth-largest economy, had been “hitting us very hard for many, many years” and that their tariffs are “one of the highest in the world.”

“It was hoped that would be the major takeaway,” said Jeff Smith, a research fellow focusing on South Asia at the conservative Heritage Foundation who has advised presidential campaigns. “There were very clear and, I think, strong signals given by the political leadership that this was a priority to get it done. … It was not enough to get a deal done.”

After arriving in India, Trump said the two sides would keep talking.

“I am optimistic that, working together, the prime minister and I can reach a fantastic deal that’s good and even great for both of our countries … except that he’s a very tough negotiator,” Trump said.

Trump was accompanied on the trip by Commerce Secretary Wilbur Ross as well as his daughter, Ivanka Trump, and son-in-law Jared Kushner, who both serve as senior advisors in the White House. But U.S. Trade Representative Robert Lighthizer did not attend, scrapping plans to hold meetings with his Indian counterpart in New Delhi before the president’s arrival.

On Tuesday, Modi said through a translator he was “confident” that further negotiations “will lead to good results.”

U.S. officials were surprised recently when India proposed new tariffs on medical devices, electronics and toys, among other products, in its Feb. 1 budget. The move is part of the country’s “Make in India” domestic manufacturing program.

After India released its budget, Trump said he expected the broader trade deal to be completed later this year, but perhaps not before the election. Trade between the U.S. and India is about $150 billion annually.

A former aide said the timing, if it comes before the November election, could work to his advantage as he looks to appeal to Indian-American voters, a growing force in the U.S. that has generally backed Democrats.

“He’d be smarter to sign it in a large Indian community here in the U.S,” the person said.

Trump isn’t the first president to fail to improve trade relations with India. But the modest deal that had been expected was only supposed to address issues of the last few years, largely of Trump’s own making.

It’s a situation that has played out across several foreign and domestic problems beyond trade, including security tensions with Iran and North Korea and the family separation policy at the border.

With India, Trump kicked the country out of a trade preference program for developing countries that had exempted Indian goods worth more than $6 billion from import duties in 2018, according to the Congressional Research Service.

The limited deal had been expected to address American concerns over price controls on medical devices and Indian tariffs on some agricultural and manufactured goods, including Harley-Davidson motorcycles.

In recent weeks, Trump has hailed two much more high-profile trade agreements with Mexico and Canada, which he signed into law in January, and with China, though it falls short of the promises he made on the 2016 campaign trail.

“The promise of an India deal wasn’t on the broader public’s radar,” said Jason Miller, an informal adviser and former campaign aide. “It just hasn’t been getting as much attention.”