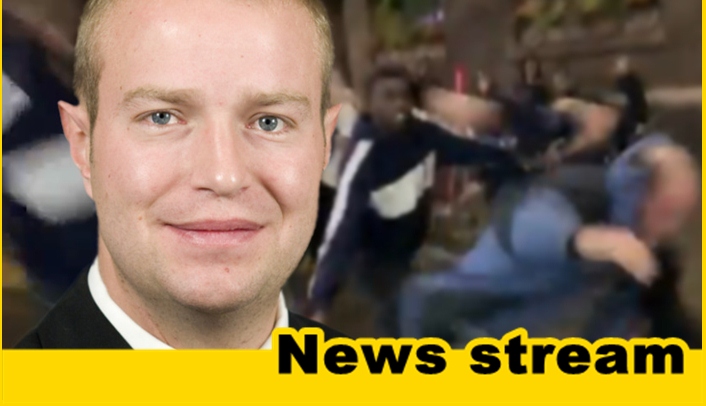 State Rep. Nick Zerwas (R-Elk River) (pictured above) called on Gov. Tim Walz and House Speaker Melissa Hortman (DFL-Brooklyn Park) to condemn the violent behavior of anti-Trump protesters and the involvement of a sitting Democrat legislator in the demonstrations.

State Rep. Aisha Gomez (DFL-Minneapolis) was spotted in a number of videos of the protests outside of President Donald Trump’s Thursday night rally in Minneapolis.

“As police offers and Minnesotans that attended a political rally were dealing with violent protesters, Rep. Gomez pauses for a moment to reflect on how much ‘fun’ she is having,” Zerwas wrote on Twitter. “A sitting member of the Minnesota House acting with Antifa … and having fun.”

As Police officers and Minnesotans that attended a political rally were dealing with violent protesters, Rep. Gomez pauses for a moment to reflect on how much "fun" she is having…

A sitting member of the MN House acting with ANTIFA… and having FUN #TCNT #FNC #FoxAndFriends pic.twitter.com/sWwsBVvfKd

Zerwas called it a “sad day for the Minnesota Legislature.”

A sitting Democrat member of the MN House of Representatives joined forces with ANTIFA as they attacked Trump rally attendees and the Minneapolis Police!

As The Minnesota Sun reported, Gomez was live-tweeting from the anti-Trump demonstrations and revealed that she called Mayor Jacob Frey to request that he advise law enforcement to stop using pepper spray on violent protesters.

Zerwas released a statement Friday calling on Walz and Hortman to condemn Gomez for her involvement and the behavior of violent demonstrators.

“Thousands of Minnesotans, protesters and rallygoers alike gathered peacefully in downtown Minneapolis yesterday to exercise their First Amendment rights. Our law enforcement officials did an incredible job ensuring safety of those on both sides,” he said. “However, a group of protesters engaged in illegal behavior after the President’s speech, assaulting rallygoers, hurling bottles at the police, and throwing traffic cones at cars.”

“Marching among them was a sitting legislator,” Zerwas continued. “Governor Walz and Speaker Hortman should be crystal clear: this type of behavior is unacceptable, and elected officials have no excuse for joining those who were at the center of the chaos last night in downtown Minneapolis.”

Neither Walz nor Hortman have responded to Zerwas’ statement. Gov. Walz has had tiffs with the president in the past, but said next to nothing about Trump’s Minneapolis rally.

Gomez hasn’t responded either, but continued to criticize the police for using pepper spray during the protests.

It is not ok to treat members of the press or anyone else like this. https://t.co/MxOENlBY50