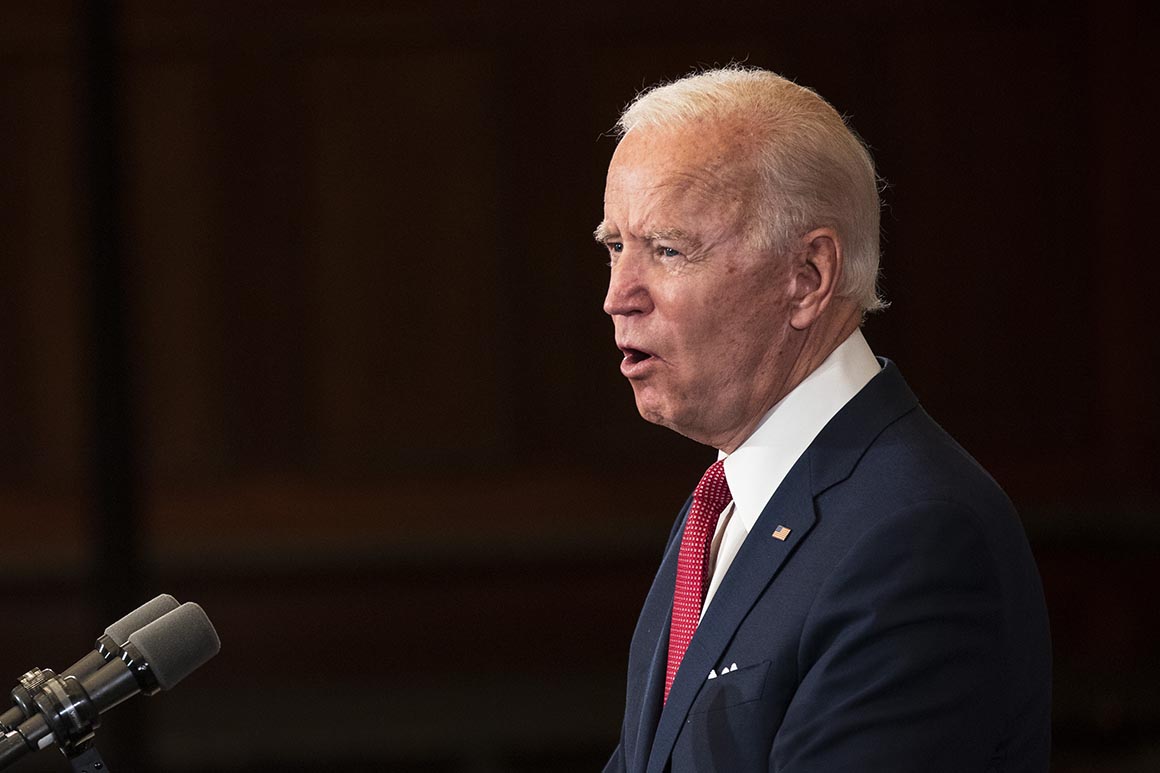 Though many police tend to lean to the right politically, the criticism from the National Association of Police Organizations is new. NAPO endorsed Barack Obama in 2008 and 2012 because of Biden’s presence on the ticket, Johnson said.

But the Obama-Biden reelection in 2012 marked a watershed political year in the relationship between law enforcement and the Democratic Party.

More than eight months before Obama’s re-election, the Black Lives Matter movement began in response to the shooting death of a black Florida teenager, Trayvon Martin, by a self-appointed neighborhood watchman. Black Lives Matter made police brutality, systemic racism and the 1994 crime bill top issues for progressives in the 2016 and 2020 Democratic presidential primaries.

While under fire from the left, police increasingly became more Republican, said Jim Pasco, executive director of the Fraternal Order of Police and former in-house lobbyist for the Bureau of Alcohol, Tobacco, Firearms and Explosives who worked closely with Biden on the crime bill and other legislation.

“There are two evolutions in two directions. On law-and-order issues, Biden was right of center: the ‘94 crime bill, the Brady Law and enhanced penalties. But as time has gone by, his positions have moderated, moderated, moderated to where we are today, where he would not be considered a law-and-order guy in the sense that law enforcement sees it,” Pasco said.

“Also, as time has gone by, the law-enforcement community — especially the rank and file — has become far more conservative. Today, the FOP and other labor groups are far-less open to addressing gun-control issues, things that traditionally they supported and that Biden worked very closely and successfully with them on.”

For instance, Pasco said, law enforcement is less likely to be engaged in supporting gun control, which was once more popular with police. An assault-weapons ban was included in the ’94 crime bill along with other legislation that gave the federal government more power to investigate a “pattern or practice” of local law enforcement abuses.

But the 1994 crime bill also serves as the poster child for the mass-incarceration movement that swept states, and Biden has struggled to win support with progressives and young voters of color as a result. Many want to see more contrition from him over the bill’s role in popularizing mass incarceration, an issue that cropped up again in an interview two weeks ago with a black radio show host, leading Biden to say “you ain’t black” for supporting Trump. Biden later apologized.

Biden’s call Tuesday for more police reform and oversight helped shore up support among progressives, especially those who are young and nonwhite, as evidenced by the endorsement later in the day from former HUD secretary Julian Castro — the only Latino and the youngest Democrat to run against Biden for president — endorsed his former rival, citing the proposed reforms.

The Democratic group For Our Future said its research showed police brutality was a top five issue for young voters and voters of color in five of Florida’s seven major Democratic metropolitan strongholds in 2018, and it remains a big concern in urban areas of Wisconsin, Pennsylvania and Ohio.

Cornell Belcher, a pollster who surveyed African-Americans before the midterm elections, found that black voters were about as likely to support protecting Medicare and Social Security as they were to back hate crimes legislation, “holding bad cops accountable” and ending racial profiling. All polled at 80 percent or higher.

“It is a feeling that has been building up for a while,” Belcher said.

Appealing to progressives over police policy is a balancing act for Biden, who has long pitched himself as “Middle Class Joe,” who appeals blue-collar union households. But Harold Schaitberger, head of the International Association of Firefighters, said Biden’s Tuesday speech was “pitch perfect” because it reflected how “he more than feels he’s been a life-long, career-long supporter of law enforcement. I think he knows, hey, ‘I have a history. But this moment is about a moment, and I have to focus on our communities and black and brown communities.’”

In his speech, Biden pledged to establish a national police oversight commission in his first 100 days and called on Congress this month to outlaw the use of chokeholds by police and said: “There are other measures to stop transferring weapons of war to police forces, and improve oversight and accountability to create a model use of force standard.”

“Most cops meet the highest standards of their profession. All the more reason that bad cops should be dealt with severely and swiftly,” Biden said. “We all need to take a hard look at the culture that allows for these senseless tragedies to keep happening.”

The Trump campaign Wednesday drew attention to what was missing in his speech.

“Biden hasn’t said a single word on one of the most horrific aspects of the bloodshed: attacks by rioters and looters, sometimes fatal, on police officers in the line of duty protecting innocent Americans,” the Trump campaign said in a Wednesday email that highlighted police deaths and injuries in eight separate instances nationwide.

“Law enforcement, firefighters know who Joe Biden is,” Demings said. “They know who he is because he has stood with our public servants in the toughest time in their lives.”

Demings, a former FOP member, pointed out that her former union, and others representing law enforcement and police across the nation have condemned Floyd’s death. Echoing Biden, she said it’s a call for more reform.

The president of Demings’ former union in her home state, Bobby Jenkins, expressed admiration for Demings and her husband, a former sheriff in the Orlando area, but said Biden didn’t know what he was talking about when he called on a ban for weapons of war for police, pointing out that some suspects are now armed with high-powered weaponry.

“If anything, with the way people have weapons now, we need more and not less. We’re not going around looking for people. They’re looking for us,” Jenkins, a Republican said. “Joe Biden was very police-supportive back in the day but not so much lately.”

Jenkins, a Republican, said some police don’t like Trump at all but said the Obama-Biden administration wasn’t pro-police enough. He said the former president didn’t go to the annual police memorial every year he could, but Trump has. Trump also curried favor with law enforcement by lighting the White House blue to honor police in 2017, which Obama didn’t do the year before. Still, Biden remained well-liked by police.

“Historically, Mr. Biden has always been a friend of law enforcement and that’s why I find his comments a little disheartening,” said Larry Cosme, head of the Federal Law Enforcement Officers Association.

At the urging of some police groups, Trump also rolled back a series of Obama-era police reforms, written after high profile race-related killings by police, and earlier this year formed the President’s Commission on Law Enforcement and the Administration of Justice. It’s composed only of law enforcement and shut out the public, prompting a lawsuit last month from the NAACP.

Under Obama, law enforcement and civilians sat on his Task Force on 21st Century Policing in 2015 but “there was not a good working relationship” between the administration and law enforcement, said David J. Mahoney, the sheriff of Wisconsin’s Dane County and the incoming president of the National Sheriffs’ Association.

Mahoney, a Democrat representing a progressive community, said a number of sheriffs felt “there was a lot of hand-holding and no action” from the Obama administration and there was a lack of funding relative to what police chiefs received. Mahoney also faulted Trump for downplaying the intent of the Obama task force because it was designed to begin “a dialogue on building trust between law enforcement and communities of color.”

“We have work to do. Law enforcement recognizes we have work to do,” said Gualtieri, a moderate Republican who represents St. Petersburg’s Pinellas County. “But for Joe Biden or anyone else to start calling for all these ‘reforms’ reminds me of what happened under the Obama administration. It wasn’t productive in its relationship with law enforcement. A national law enforcement commission sounds like a lot of political rhetoric.”