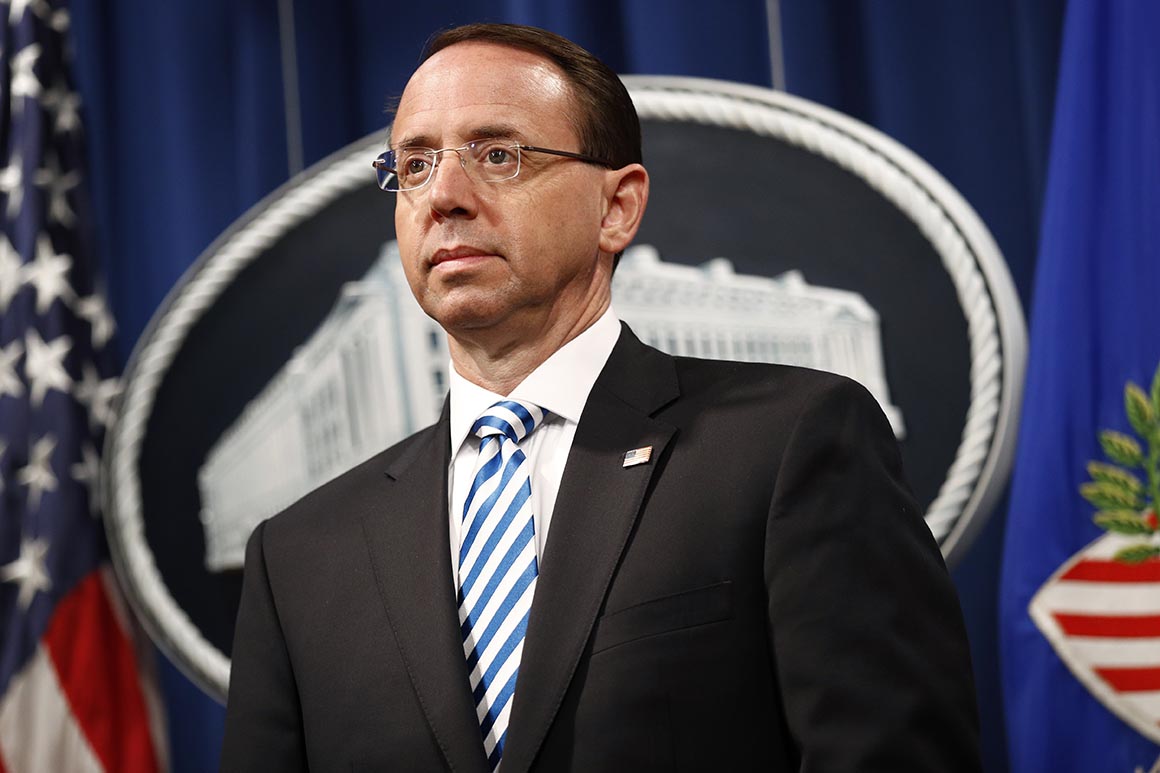 Trump has been the most enthusiastic voice making that argument, and once tweeted a picture of a number of U.S. officials behind bars — including Rosenstein.

But the former top Justice Department official made decisions throughout the process that angered politicians on both sides of the political aisle. And newly released, highly redacted documents — obtained by Citizens for Responsibility and Ethics in Washington through a Freedom of Information Act lawsuit — indicate that he was more involved than previously known in the department’s controversial roll-out of Mueller’s findings.

Rosenstein’s defenders argue his willingness to face bipartisan ire is indicative of an apolitical law enforcement approach. But Rosenstein was a witness in Mueller’s probe, and the highly redacted new documents highlight that much more information about the origins and closure of the Mueller investigation could still come to light.

Still, Trump and his allies have been pushing Senate Republicans to more aggressively embrace their own investigations, with a particular focus on the roles played by high-level Obama administration officials in opening up the counterintelligence investigation targeting the Trump campaign. Trump dubbed the alleged misconduct “Obamagate” but so far hasn’t offered evidence to support claims that his predecessor orchestrated an effort to undermine him.

Judiciary Committee Chairman Lindsey Graham (R-S.C.) said the hearing will zero in on the Justice Department inspector general’s report on the Foreign Intelligence Surveillance Act courts. The report found widespread abuses and other missteps, including “significant errors and omissions,” as part of the effort to seek a surveillance warrant for Carter Page, a former Trump campaign adviser.

Democrats, though, have other plans.

Coons, a Biden ally, said Rosenstein can expect to be peppered with questions about Russia’s interference in the 2016 presidential election, and whether he agrees with the intelligence community’s initial findings on Moscow’s intervention. Sen. Mark Warner (D-Va.), the vice chairman of the Intelligence Committee, said he hopes Rosenstein will affirm Russia’s role in the 2016 election as a malign actor.

“I hope he will make the same kind of commentary that three years of a bipartisan Senate investigation validated — that the intelligence community’s assessment was right, that the Russians intervened, that they did it to help one candidate, Donald Trump,” Warner said in a brief interview.

Democrats are also expected to push back on Republicans’ assertions that the FBI had no basis to open up an investigation into the Trump campaign. Rosenstein’s decision to appoint Mueller will be a focal point of the hearing for both sides.

“Cutting through all the Republican hype, any honest objective law enforcement professional would say this investigation under Robert Mueller was well-warranted based on the information available then and now,” Sen. Richard Blumenthal (D-Conn.), a Judiciary Committee member, said in an interview.

Blumenthal was one of just a handful of senators to oppose Rosenstein’s confirmation in 2017, citing his refusal to commit to appointing a special counsel to handle the Russia probe.

“I was skeptical about Rod Rosenstein from the start, but he certainly did the right thing in appointing Bob Mueller,” he said. “Now the question is if he will continue to do the right thing by adhering to the truth, which is that the investigation was well-warranted.”

Some Democrats are already looking to support Rosenstein ahead of the hearing. The Judiciary Committee’s top Democrat, Sen. Dianne Feinstein of California, has known Rosenstein for several years and said she expects him to be truthful. Her comments effectively planted a marker for how Rosenstein will be received — and critiqued afterward — by partisans on both sides of the aisle.

“I’m a big fan of his,” Feinstein said in a brief interview. “He’s been straight up, honest, direct. And I appreciate that.”

Rosenstein could also face questions about a 2018 New York Times report that he raised the possibility of invoking the 25th Amendment, which paves the way to strip a president of powers if he or she is incapacitated, to remove Trump from office — and even privately suggested secretly recording Trump in order to spur such a push. His comments reportedly came in the aftermath of Trump’s decision to fire FBI Director James Comey, and he said the report was inaccurate.

The documents CREW obtained indicate Rosenstein played a role in drafting Attorney General William Barr’s March 2019 letter to Congress that described Mueller’s findings — even though he was a witness in the special counsel’s investigation.

The letter, which he sent three weeks before the release of the partially redacted report, said Mueller found no evidence of coordination between the Trump campaign and the Kremlin, and did not decide whether to advise the attorney general to charge the president with obstruction of justice. Mueller criticized Barr’s letter, writing to him that his missive failed to fully describe “the context, nature, and substance” of his report.

The documents also show that on the day Barr sent the letter to Congress, Rosenstein and other senior Department officials exchanged emails under the subject line “draft memo” with an attachment labeled “AG Memo 3-24 1300.docx.” Rosenstein proposed 10 edits to the document, all redacted.

Marianne LeVine contributed to this report.