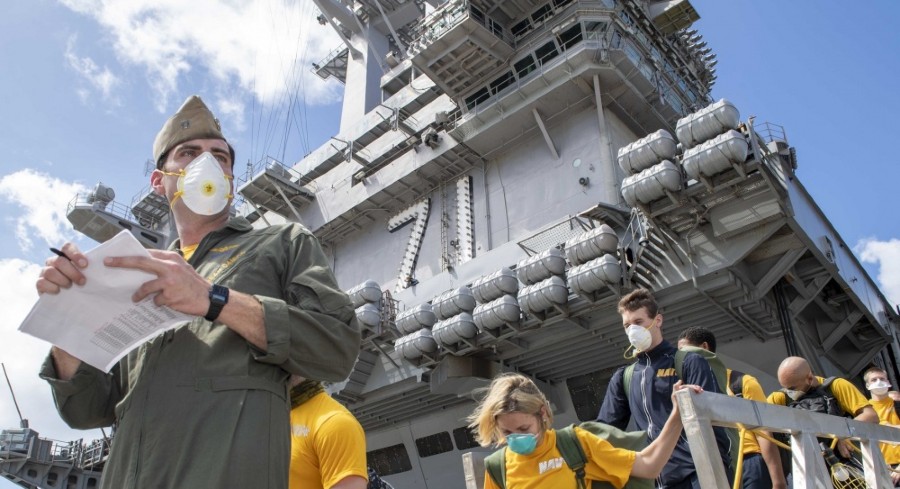 But the biggest problem is the lack of reliable information about the status of the ship or the outside world, the sailor said.

“It’s not terrible, honestly. We could be on a boat,” the sailor said. “It’s just frustrating because we have no idea what’s going on.”

Support for the skipper

After reports of the first Covid-19 cases onboard the ship emerged last month, a second sailor described feeling helpless and scared. The staff began bleaching the ship two or three times a day, sometimes spending two hours cleaning. Rumors flew: One minute, they were told they were all going to be flown to Japan; within five minutes, that plan was apparently “canned,” the sailor said.

“It was scary because it felt like nobody was taking action and we were stuck on the ship like sardines,” the sailor said. “No leaders were stepping up to tell us what was going on.”

The crew became more hopeful after the ship’s commanding officer, Capt. Brett Crozier, sent a memo to Navy leadership requesting additional help. The memo was leaked to the media, setting off a roller coaster chain of events that ended with Crozier getting fired and acting Navy Secretary Thomas Modly stepping down over his remarks to the crew.

The first sailor listened to Modly’s speech over the public address system, during which he cursed repeatedly, berated the crew and called Crozier “naive” and “stupid.”

“That was probably one of the most unprofessional speeches I’ve ever heard,” the sailor said.

The crew and their families have overwhelmingly supported Crozier, who the second sailor said “always put us first.” Videos posted of his last moments on the ship showed sailors cheering, chanting his name and swarming to say goodbye.

“Do I think he leaked that letter to the San Francisco Chronicle? I’m not sure. But we all sure as hell hope he did,” said the second sailor. “All he was trying to do was not have a death on his hands because the Navy was downplaying how bad this was.”

The Navy last week completed an investigation into the incident; leadership has not yet ruled out reinstating Crozier.

Boredom and then panic

While the Pentagon reeled from the Navy’s leadership changes, the Roosevelt’s chain of command was still figuring out logistics. Healthy people were finally moved out of a crowded gym into appropriate housing. The second sailor moved directly from the ship to a hotel, where crew members were allowed to open their doors only to grab their meals three times a day. The lucky ones were able to wave to each other from their balconies.

But for some, boredom soon turned to panic. The second sailor began experiencing Covid-19-like symptoms, which got worse over the course of five days. The person left the hotel to go into isolation elsewhere.

For others, quarantine is a waiting game. It’s not clear when the isolation period will be over; after the 14-day quarantine, sailors must still wait up to 48 hours to get their test results back. And some in the gym speculate that after they have finished 14 days in that location, those who test negative may be moved to hotels for another period of isolation.

In the meantime, crew members have gone to great lengths to ease the monotony. A third sailor who is in a hotel room tried to dye a hard-boiled egg with a tide pod. A friend curled her hair with tampons, the sailor said. Someone set up a Facebook page for people to post their workout hacks.

“We all do weird stuff you wouldn’t think of because of how bored we are,” the third sailor said.

Until Tuesday, the crew was unable to get mail from their families, according to a spouse of a fourth sailor assigned to the Roosevelt. Now, care packages — containing toothpaste, deodorant, laundry pods and ramen, for example — are finally arriving. After hours on the phone with cell phone service providers, the spouse was able to get free data for the crew members, who can now FaceTime and text their families without worrying about the bill.

Sailors are being provided toiletries, as well as a catalog from the Navy Exchange they can use to order additional items, McMarr said.

The fourth sailor has been tested four times so far, but is still healthy despite being forced to isolate with Covid-positive crew members when the ship pulled into Guam on March 27. The sailor’s food is also being rationed, although the spouse said service members are used to that kind of hardship.

“It was just a piece of bread and one scrambled egg and one water bottle,” the spouse said. “The next day he got an MRE [Meal, Ready-to-Eat], and he was so grateful for the MRE.”