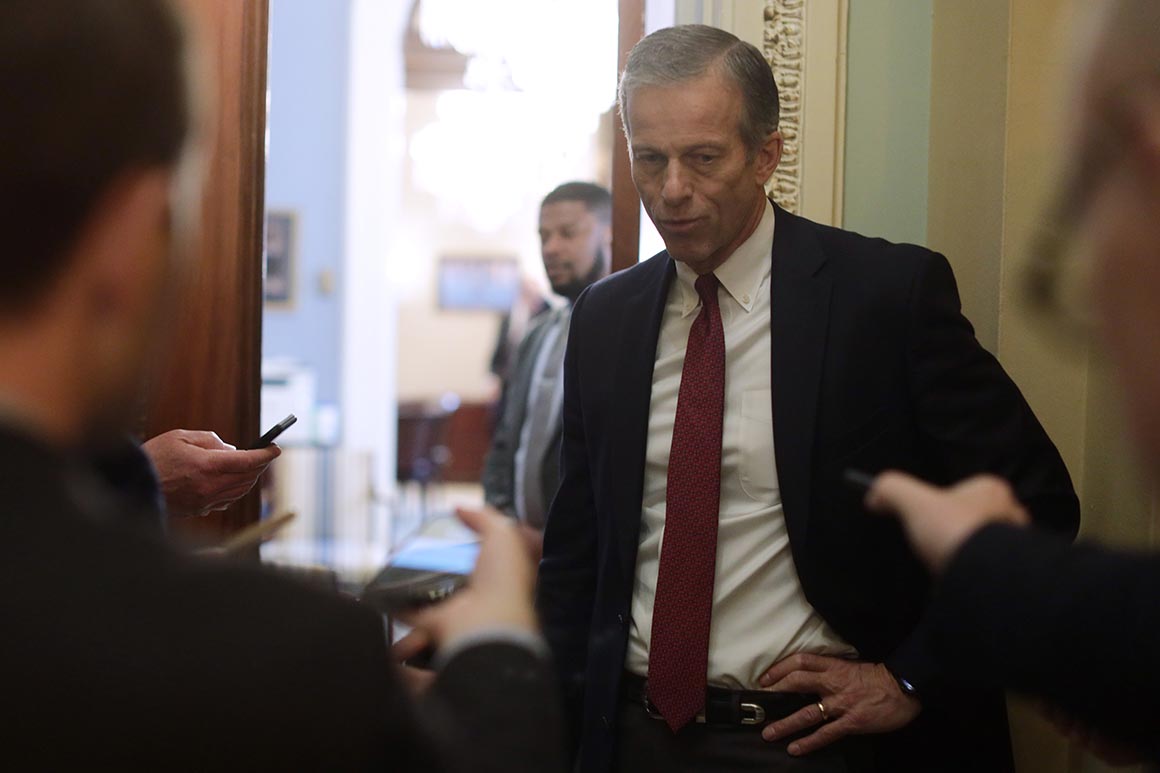 “If we’re not there, it’s hard to push them through,” said Senate Majority Whip John Thune (R-S.D.). “There have been several that have been nominated now for the circuits that have to have confirmation hearings, and that means we’ve got to be in session in order to be able to move them. It’s definitely affected the schedule that way.”

Sen. Mike Lee (R-Utah) in an interview predicted that the Senate will be back on track to confirm nominees if the chamber returns to a normal schedule soon.

“We can recover from that fairly quickly if we go back to our regular schedule. I don’t think it will end up making a difference” Lee said. “If on the other hand, if this continues — meaning if we don’t find some way some time soon to start having hearings and markups again — yeah that could complicate things.”

The Senate is scheduled to return April 20. But that date could change depending on the progression of the coronavirus. Senators are not exactly eager to risk exposure by traveling to Washington, especially after the D.C.-Baltimore area was recently designated an “emerging hot spot” for the virus.

“If we’re not there, it’s hard to push them through.”

The Senate Judiciary Committee, led by Sen. Lindsey Graham (R-S.C.), last held a nomination hearing March 4 and a committee vote March 12. The committee, which typically notices its hearings one week in advance, anticipated that senators would work from their home states the week of March 15 and did not hold hearings.

A total of 38 lifetime appointments to the judiciary are currently pending before the Senate, according to the Article III Project, a conservative advocacy group that works to approve Trump’s judicial nominees. Of those appointments, 37 are district court nominees. Twenty-seven are in committee, while 10 have been reported to the floor.

Senate Majority Leader Mitch McConnell (R-Ky.), as well as the conservative legal community, lauded Trump’s picks, especially the 37-year-old Walker. Walker, a Kentucky native, is considered a protégé of McConnell’s and the two have reportedly known each other for years. Walker clerked for retired Supreme Court Justice Anthony Kennedy, as well as Supreme Court Justice Brett Kavanaugh when he was on the D.C. Court of Appeals.

He was confirmed by the Senate along party lines in October to become a district judge for the Western District of Kentucky, though the American Bar Association gave him a “not qualified” rating, citing insufficient legal experience.

Senate Democrats have criticized the choice.

“To take this man who’s been on a Kentucky district court for a matter of weeks and promote him to the second highest court in the land is an outrage,” said Senate Minority Whip Dick Durbin (D-Ill.). “It is as bad as it gets in terms of packing the court with political toadies.”

Wilson was nominated to fill a vacancy on the powerful 5th U.S. Circuit Court of Appeals. Trump had previously nominated to the circuit Halil Suleyman “Sul” Ozerden — a close friend of former acting chief of staff Mick Mulvaney. But Senate Republicans on the Judiciary Committee opposed Ozerden over a ruling in which he determined that a challenge to the contraceptive mandate in the Affordable Care Act was premature.

In a recent interview with conservative talk radio host Hugh Hewitt, McConnell reiterated that judicial nominees remain a top priority for the Senate.

“Of course, we will go back to judges,” McConnell said. “My motto for the rest of the year is leave no vacancy behind.”