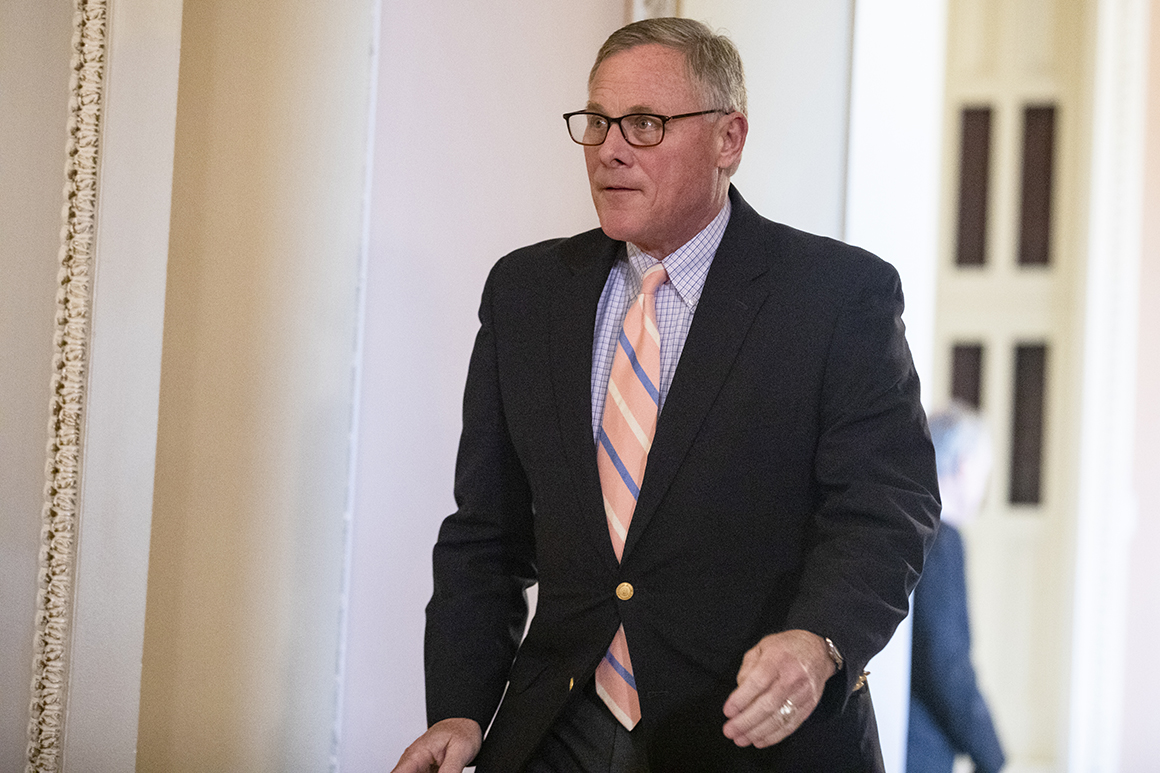 A spokeswoman for Burr declined to comment, as did a spokesman for Grassley. Representatives for Johnson did not return multiple requests for comment.

When asked whether he has met or worked with Burr on the Biden probe, Grassley said earlier Thursday: “No, I haven’t. And I haven’t had any conversation with him either.” Johnson did not answer directly, only saying: “We talk about things.”

Burr has rarely spoken publicly about the issues surrounding the impeachment of Trump. And his exchange with Johnson and Grassley was not the only time Burr purportedly has expressed such concerns to his Republican colleagues.

Senate Judiciary Committee Chairman Lindsey Graham (R-S.C.) has hinted at similar unease with the Biden investigation, and he has said that some of those concerns were relayed to him by Burr — in particular, the source of the information the committee obtains.

“I called the attorney general this morning and Richard Burr, the chairman of the Intel Committee, and they told me, ‘take very cautiously anything coming out of the Ukraine against anybody,’” Graham said during a Feb. 9 appearance on CBS’ Face the Nation.

Attorney General William Barr established an intake process earlier this month for documents relating to Ukraine that may be produced by Rudy Giuliani, Trump’s personal attorney who was leading the push to spur Ukraine-led investigations of the Bidens. Graham said that process should determine whether the information is valid.

“Any documents coming out of the Ukraine against any American, Republican or Democrat, need to be looked at by the intelligence services, who has expertise I don’t because Russia is playing us all like a fiddle,” Graham added.

Graham’s panel has declined to participate in the Johnson-Grassley investigation, but the South Carolina Republican has said there are legitimate conflict-of-interest questions over Hunter Biden’s role on the board of a Ukrainian energy company, Burisma.

Burr, for his part, has pledged to seek an interview with the whistleblower whose formal complaint sparked the House’s impeachment inquiry.

Some conservatives interpreted Burr’s posture as an effort to investigate allegations that the whistleblower was biased against Trump and worked with congressional Democrats — claims that House Republicans have tried to pursue. But sources familiar with the effort said it is focused more on reforming the whistleblower process and protecting individuals who come forward to expose potential abuses within the government. And Burr himself has said he won’t “relitigate” the events that led to Trump’s impeachment.

Democrats, too, are warning of a potential Russian disinformation effort at the heart of the Biden investigation. Lawmakers have pointed to Russia’s attempts to hack Burisma, which could indicate that the Kremlin, too, was looking for dirt on the Bidens.

“I think it’s amazing that people are still potentially viewing manipulated Ukrainian information. That is not in our national security interest,” Senate Intelligence Committee Vice Chairman Mark Warner (D-Va.) said. “There is plenty in the public domain that Russia was behind a lot of these fables and stories.”

As part of their investigation, Johnson and Grassley have requested documents and transcribed interviews. Some of those documents were produced by the State Department last week, and the committees are reviewing them. But investigators have yet to secure commitments from potential witnesses or issue subpoenas.

“We wait until we get all the information,” Grassley said on Thursday. “I don’t want to threaten subpoenas until I know that they’re going to be used.”

Trump’s allies have openly encouraged such an investigation, arguing that the corruption claims against Biden are legitimate.

“It’s within their jurisdiction,” Sen. Marsha Blackburn (R-Tenn.), a close Trump ally, said of the probe. “And if they want to move forward with it, I think it’s a good thing.”

But others aren’t so sure. Asked if he supports the investigation, Sen. Mitt Romney (R-Utah) appeared to distance himself from it.

“I don’t know whether there’s any there there. I don’t know that they do either,” said Romney, who was the lone Republican to vote to convict Trump in the Senate’s impeachment trial.

“And they want to apparently determine whether there is something of significance or not,” Romney added. “So they’re certainly welcome to take a look. That’s their choice. It’s not one I’m carrying out.”