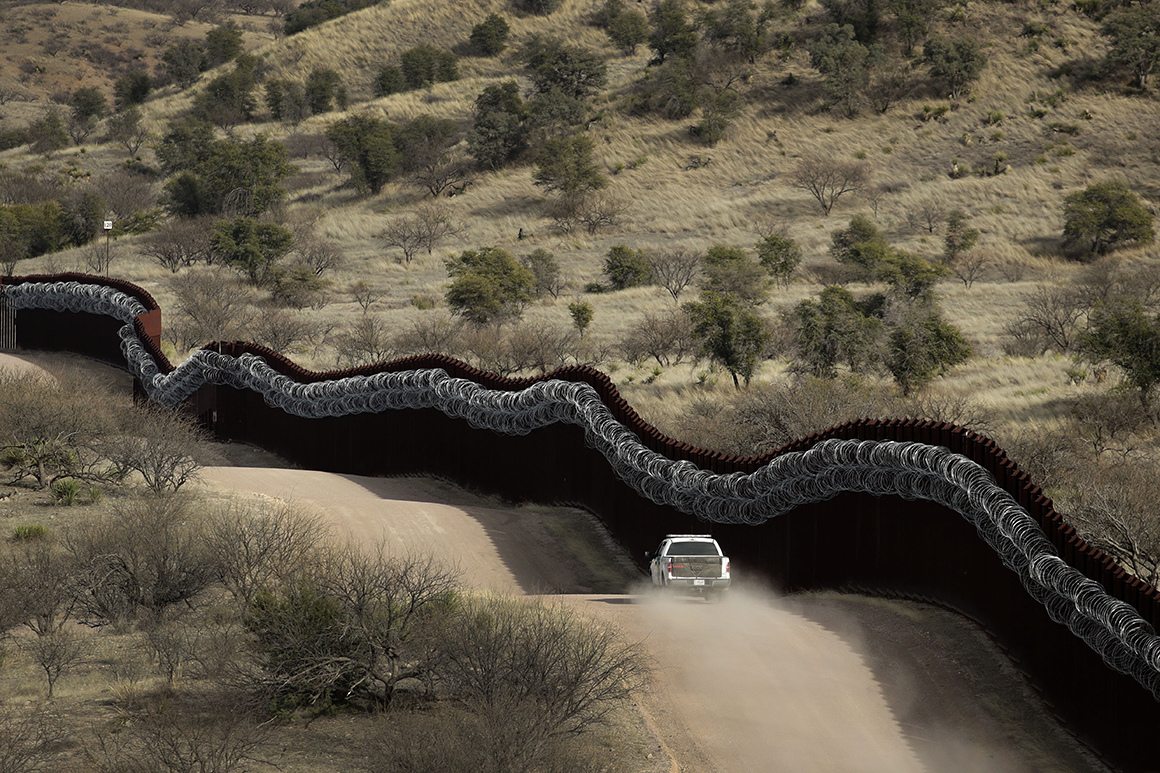 This secrecy is a great riddle, given how open the administration once was in claiming its authority to toss aside laws under the president’s emergency powers. Trump’s actions have since posed a fundamental challenge to Congress’ power of the purse under the Constitution and the balance between the branches of government as envisioned by the Founding Fathers. So why withhold a full explanation after the deed?

“What’s clear is they are not being transparent,” said Rhode Island Sen. Jack Reed, a West Point graduate and the top Democrat on the Senate Armed Services Committee. “Common sense says … if they say they can’t talk about it, then there’s something they don’t want to talk about, i.e. it’s not appropriate.”

Indeed, federal judges are being told so little in court proceedings that it’s hard for them to “follow the money.”

Appearing before the Ninth Circuit U.S. Court of Appeals last month, the Justice Department portrayed a seamless budget process in which the entire $3.6 billion was diverted without a single transfer or reprogramming of funds. Defense Secretary Mark Esper simply “reprioritized” the use of the military funds already available to him, said H. Thomas Byron III, a Justice Department appellate attorney.

“Can I stop you there? You said ‘reprioritize?’” asked Judge Daniel Collins, a member of the panel hearing oral arguments on the legality of the wall funding. “I want to understand as best I can … what actually happens. Is there a transfer and a reprogramming of money from one account to another account and then an expenditure differently? How does the money move in this case?”

“No your honor, there’s not a transfer or a reprogramming of any kind,” answered Byron.

Since few in the courtroom seemed familiar with the nitty-gritty of the appropriations process in Congress, no one challenged this account. Minutes later Collins, who was appointed to the appeals court by Trump, turned around and used Justice’s same words to squelch arguments made by one of the attorneys opposing the wall funding.

In fact, the process was far more complicated than what was portrayed at the hearing.

For one, Congress does not appropriate military construction funds in one lump sum to the Defense Department. Instead, the dollars go to separate construction accounts for individual services: the Army, Air Force and Navy, which also supports the Marines.

Over the years, lawmakers have severely limited the Defense secretary’s ability to transfer these dollars from one service to another. So DOD’s acting comptroller, Elaine McCusker, had to find a path whereby all these disparate appropriations could be funneled to one entity and the lead player on the wall project: the Army Corps of Engineers.

To minimize the political backlash in Congress, DOD opted to go first with a $1.84 billion tranche representing prior appropriations for overseas projects. But that also posed challenges because of the unique bill language attached to a big part of this funding.

This has received no attention in the courts, but $786 million, or more than 40 percent of the dollars in the first tranche, constituted Overseas Contingency Operations (OCO) appropriations — money outside the annual base budget for military construction.

This is important because when allocating OCO dollars, the House and Senate Appropriations Committees are more specific in their bill language. Thus the enacted law dictated not only which service got the OCO dollars but spelled out that the purpose of the funding was to build projects “outside of the United States.”

The odyssey of two Navy projects in Spain and Italy, totaling about $87.6 million, illustrates the scope of what was entailed in moving this money to the Corps.

For fiscal 2019, both were part of a larger package of OCO appropriations for the Navy designated for projects “outside the United States.” Yet now, based on DOD’s own answers, the same dollars for Navy port and air operations are being “made available” by the Navy directly to the Army Corps of Engineers to build a wall inside the U.S.

For the Navy to go through the Army Corps of Engineers for any construction project is an anomaly in itself, since the department has its own long-standing Naval Facilities Engineering Command.

During the Ninth Circuit heading in San Francisco, Judge Collins had asked, “How does the money move in this case?” If this fuller account sounds more complicated than what Collins was told, it’s because it is.

Getting answers from DOD and the Comptroller’s office is no easy matter. Over the past two weeks, written questions submitted by POLITICO were repeatedly ducked, despite efforts by press staffers to seek more clarity.

The department is clearest in denying any transfers have been part of the process, asserting that the funds “made available” to the Corps came “directly from the Components [individual services’] military construction accounts.” That would indicate the appropriations for the overseas projects were apportioned from the Treasury to each service as prescribed by Congress, and then orders were given to apply the funds instead to the wall.

How this change of direction was accomplished is the crux of the matter, but here DOD clams up.

One scenario is that the Comptroller’s office used its authority under the so-called 460 military construction review process to “withhold” funds for the deferred overseas projects. That would have left each service with a surplus of undesignated funds, which could be “made available” to the Corps’ for wall construction contracts without needing transfers.

But thus far, DOD won’t say whether this was the path it took. Instead, in response to specific questions, it has twice handed back official statements that avoid any mention of withhold orders or the 460 process in connection with the first tranche of funds.

These responses are telling, given how firm DOD is in denying any transfers between service accounts. In the same statements, DOD does say that the second tranche of $1.76 billion — including projects in 23 states and three U.S. territories — is “currently on withhold (funds withheld from obligations) from the Components [services] and has not been made available to the Secretary of the Army, as the funds are not currently needed for obligation.”

Part of DOD’s refusal to answer directly may go to the fact that any large-scale use of prolonged withhold orders invites challenges under the Impoundment Control Act of 1974.

The ICA recognizes the need for executive departments to temporarily withhold funds in managing programs. But after Congress’ historic battles with Richard Nixon over impoundment — he refused to spend appropriations for a variety of programs — these are strictly circumscribed.

The most routine withholds are programmatic, such as the Forest Service holding off on committing fire-fighting appropriations until the annual fire season. Or, in the case of a new program created by Congress, a department might withhold spending funds until rules and regulations are in place to administer the program.

Similarly, if the DOD wanted to rescind or defer funding for one of the military projects, it could withhold obligating the funds on a short-term basis. Such withholds figured in a famous battle between former Vice President Dick Cheney, when he was defense secretary, and then-Sen. Bennett Johnson (D-La.) over funding for an Army munitions facility in Louisiana. By coming up with various rescission requests or deferrals, DOD was able to use withholds over an extended period against Johnston.

But past DOD comptrollers who served under Republican and Democratic presidents said in interviews they have never witnessed withholds on the scale of what appears to be happening in the case of wall funds.

Budget experts say that when evaluating the legality of a withhold order it is most important to look at the purpose — and how it corresponds with the purpose of the initial appropriation enacted by Congress.

Mindful of this, the administration is telling the courts that the border wall qualifies as a military construction project under a 1982 provision giving DOD leeway to construct unauthorized projects in the event of war or a presidential emergency declaration like Trump’s last year.

Known as Section 2808, this grant of special authority is not without conditions: The emergency has to be one that “requires use of the armed forces,” and the project must be one that supports “such use of the armed forces.” Since military construction is typically defined as work “carried out with respect to a military installation,” the definition of what constitutes a “military installation” also comes into play.

Here the administration argues that once a parcel of land has been acquired by the Corps for the wall and moved onto the Army’s property books, it thereby qualifies as a “military installation” since the land is “under the jurisdiction of the Secretary of a military department.” That’s why Fort Bliss in Texas now seems to be stretching into three more states — New Mexico, Arizona and California — under this process.

Opponents cry foul, but the administration insists it has checked all the boxes and can rightly claim to be spending its military appropriations for the same broad purpose as Congress intended — that is, “military construction.”

But this is where the OCO restrictions could come into play in the courts. If Congress appropriates money for projects “outside the United States,” how can that be for the same purpose as a wall inside the U.S?

“They are using this emergency power to say, `We can do anything we want,’” said Reed, who early on asked the Government Accountability Office to review the bidding procedures used by the Corps to speed contracts for the wall. “There’s no threat of the Mexican Army coming across the border. If that were the case, we’d be building bunkers, tank traps … This was a political, campaign promise [Trump] made and he’s got to deliver on it.”