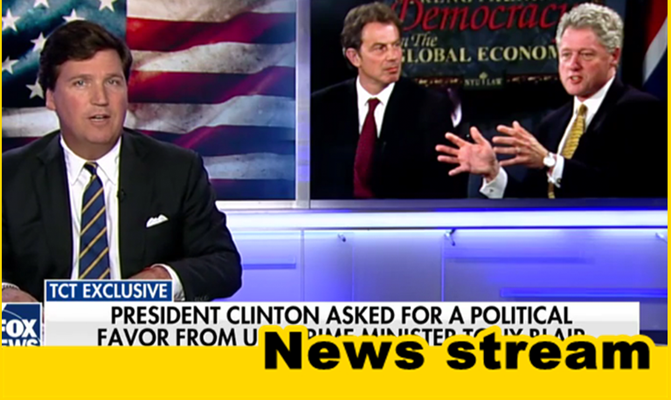 In a recent segment, Tucker Carlson brought out the fact Bill Clinton asked Tony Blair for a favor in a manner similar to the Trump-Ukraine phone call but without the controversy.

Per BizPacReview, Democrats have been breathlessly calling for President Trump’s impeachment because he allegedly asked the Ukrainian president to look into Joe Biden’s dubious Ukraine dealings.

However, they never made a peep when former president Bill Clinton asked then-UK Prime Minister Tony Blair for a political favor in 2000, suggesting it would help his Vice President, Al Gore, in his election against George W. Bush.

Fox News host Tucker Carlson unearthed the transcript of a February 2000 phone call where Clinton asked Blair to intervene in a conflict between British Airways and two American airlines. Clinton suggested that resolving the dispute would help Democratic presidential candidate Al Gore during an election year.

“You’ve heard endlessly on cable news that it is unprecedented the president would seek political gain from a conversation with a foreign leader. Well, turns out, it has happened before,” Carlson said on Tucker Carlson Tonight.

“Back in 2000, President Bill Clinton had a conversation with Tony Blair of the U.K. and asked him to intercede in a dispute between British Airways and two carriers.

Carlson continued: “[President Clinton] at the time was much more direct than President Trump was in his conversation. This is Bill Clinton, and I’m quoting: ‘In a political season, it would be big over here to get this open sore resolved. If you could have somebody take a look at it.’ Tony Blair responded that he would.”

Carlson discussed whether the request for assistance from a foreign leader was election meddling (because if Trump had done that, the Democrats would be foaming at the mouth).
“Is this a big deal? Not really,” Tucker asked. “Is it nakedly political? Is it an attempt to use a foreign country to influence the outcome of an election in a presidential year? Yes, it is, obviously.”