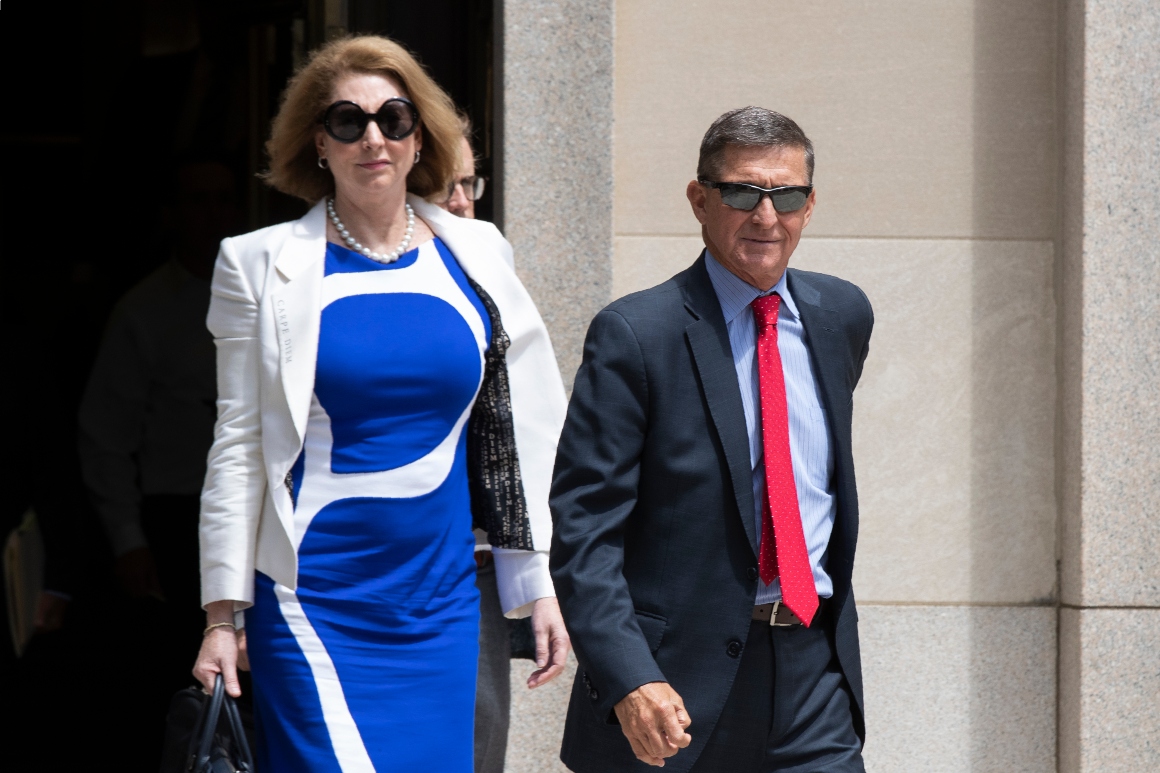 A federal judge on Tuesday pressed the lead lawyer for former National Security Adviser Michael Flynn about her contacts with President Donald Trump and whether she had urged him or Attorney General William Barr to take any actions to influence the ongoing case.

U.S. District Court Judge Emmet Sullivan’s grilling of Flynn attorney Sidney Powell, during a highly anticipated hearing, underscored Sullivan’s deep concerns about the effort by Flynn and the Justice Department — with Trump’s active and public support — to drop a criminal case against Flynn that has been pending since 2017.

After initially resisting and citing potential executive privilege concerns, Powell revealed that she briefed Trump on the case within the last two weeks and requested that he not issue a pardon. But she denied asking the president to take any other actions related to the case.

“I can tell you I spoke one time to the president about this case to inform him about the general status of this litigation,” Powell said.

“Did you ever ask the president of the United States or request his attorney general to appoint new attorneys in this case?” Sullivan wondered.

Powell’s disclosure represents the latest dramatic turn in a highly contentious case that has led to accusations on both sides of political meddling in the Flynn saga. The former national security adviser’s defenders say his prosecution was an act of retribution by the outgoing Obama administration, while ex-officials involved in his case say there’s little doubt he broke the law and that their actions were well warranted.

Sullivan has exhibited deep skepticism about the bid by the Justice Department and Flynn to shut down the prosecution despite the guilty plea the former Trump adviser entered nearly three years ago — to the point where he bucked DOJ’s demand for an immediate dismissal and tapped a retired judge, John Gleeson, to advise him on how best to proceed.

While DOJ lawyers and Flynn’s legal team have urged Sullivan to simply dismiss the case and not to proceed to sentence the retired Army lieutenant general on the false-statement charge he admitted to in 2017, the judge remarked Tuesday that his view is that sentencing in the case is already underway.

“The sentencing has already commenced in this case,” Sullivan declared, noting that a sentencing hearing that took place in December 2018 was adjourned to allow the former Defense Intelligence Agency chief to complete his cooperation with prosecutors by testifying at the expected trial of one of his former business partners.

The import of the judge’s view of sentencing as being in progress wasn’t entirely clear, but it suggested that he viewed as extraordinary the government’s decision to abandon the case. The statement might also have been a sign that Sullivan could be open to Gleeson’s proposal that the court proceed with sentencing Flynn despite the unified view of prosecution and defense that the charge should be thrown out.

Sullivan began the hearing by launching into an hour-long recitation of the arguments presented in recent weeks by Flynn, the Justice Department and Gleeson before the remote video conference was paused for about half an hour amid persistent technical failures.

The government has argued that the case must be dismissed because recently disclosed evidence and interviews with an FBI agent expressing deep doubts about the case suggests they lacked enough evidence to convict Flynn if the case had gone to trial. Barr has alleged the interview with Flynn was ginned up by the bureau even though it was in the process of shutting down an investigation of Flynn’s ties to Russia due to lack of evidence of any impropriety.

In his lengthy rundown on the case, Sullivan asserted that Flynn “elected not to fully cooperate with the government” and that his failure to cooperate led to him being dropped as a witness at the trial where he was expected to testify last summer. But Flynn’s lawyers have maintained that he did cooperate and that prosecutors scratched his testimony after he refused to “lie” as part of their case.

Prosecutors have denied any attempt to suborn perjury from Flynn. Just before the break in the session, Powell indicated she had multiple objections to Sullivan’s presentation of the case. And after the arguments resumed, the Justice Department indicated it would mount a forceful argument in support of its reasons to drop the case.

“I’m here to say that the U.S. attorney’s office decision to dismiss the case was the right call for the right reasons,” argued Kenneth Kohl, who described himself as the most senior career prosecutor in the U.S. Attorney’s office in Washington. “We’re completely unafraid to get in the weeds and address the specifics as to why we thought we needed to dismiss this case. In my judgment, your honor, there isn’t a case.”

Kohl said the case would be all but impossible for the government to take to trial because of credibility problems related to both of the FBI agents present during Flynn’s alleged lies during the January 24, 2017 interview that gave rise to the case, as well as the deputy director of the FBI at the time, Andrew McCabe.

“Who are we going to call as witnesses in this case?” Kohl asked, saying that each of the men had their “credibility” challenged by the Justice Department’s internal watchdog, the Office of Inspector General.

Despite the intense legal wrangling in the Flynn imbroglio in recent months, Powell’s comment saying she had objections was the first verbal exchange between the judge and Flynn’s defense team since a status conference held in his courtroom more than a year ago and a closed-door meeting with Flynn’s defense team a few days before that.

In its arguments in recent months, Flynn’s defense has taken an increasingly hostile tone toward the Clinton-appointed judge, mounting an unsuccessful effort to remove him from the case and accusing him of abetting the alleged misconduct by investigators.

“This hideous abuse of power and travesty of justice has only been exacerbated by the unprecedented and baseless rulings of this court, and it should not continue another day,” Flynn’s attorneys wrote in a court filing last week.

Sullivan, meanwhile, has brushed off the broadsides. An attorney retained to represent the judge in a recent spate of litigation emphasized that Sullivan is merely carrying out his obligation to conduct a searching inquiry in the interests of justice — and that he hasn’t yet decided how he’ll rule.

Flynn pleaded guilty in late 2017 to lying to FBI investigators about his contacts with Russia’s U.S. ambassador in the weeks before Trump took office.

Shortly before leaving office, Barack Obama sanctioned certain Russians for the Kremlin’s interference in the 2016 election, and Flynn, according to transcripts of his call released earlier this year, encouraged the ambassador not to escalate the situation. But Flynn told FBI interviewers that he didn’t discuss sanctions with the ambassador, and he privately indicated as much to Vice President Mike Pence, who repeated the contention on TV after news of Flynn’s conversation leaked out.

After Flynn’s guilty plea, he spent a year cooperating with special counsel Robert Mueller, who had assumed control of the investigation into the Trump campaign’s contacts with Russia after Trump fired FBI Director James Comey.

Flynn’s relationship with prosecutors grew rocky in the middle of last year, after he switched from a team of established D.C. white-collar defense attorneys to a more combative squad headed by Powell, a prominent Mueller critic. Powell wrote to Barr demanding a top-to-bottom review of the case.

Earlier this year, Flynn made a sharp break with the prosecution by seeking to withdraw his guilty plea, while leveling accusations of misconduct at the FBI officials who interviewed him and the leadership of the FBI and DOJ.

Barr ultimately sided with Flynn, ordering a review of the case and moving in May to drop the charge against the former Trump adviser. But Sullivan rejected pressure to immediately grant the effort to abandon the case, instead appointing Gleeson as his outside adviser, who argued that the episode was an overt and “corrupt” effort by Barr to protect a political ally of the president.

In the interim, DOJ began providing piecemeal tranches of internal FBI documents and communications about the Flynn case, which fueled the Flynn team’s contentions about misconduct. The documents continued to flow even after Sullivan ordered his attorneys to stop filing new documents on the public record until DOJ had completed its review of the case.

The months of incremental disclosures to Flynn’s legal team to have intensified the defense’s strident attack on the prosecutors who formerly handled the case, including Brandon Van Grack — a Mueller team veteran who was a lead prosecutor until he withdrew abruptly in May just before the Justice Department moved to drop the case.

Tuesday’s hearing was one that Flynn’s attorneys vehemently opposed, making an unusual but ultimately unsuccessful plea to a federal appeals court to head off the court session and order an immediate end to the case. In June, a panel of the D.C. Circuit Court of Appeals voted, 2-1, to grant Flynn’s request.

However, Sullivan filed a nearly unprecedented petition to have the full appeals court take up the issue, prompting an 8-2 ruling in August that restored the judge’s authority to proceed with his plan to hold a hearing on the government’s motion to dismiss the case.

Flynn’s attorneys have complained bitterly about the delays in the case since the government moved for dismissal in May. The litigation at the appeals court led to the hearing being postponed for two-and-a-half months.

Despite the drip, drip, drip of internal FBI and Justice Department documents that both the defense and prosecution say undercut the rationale for the case, the Justice Department has maintained that there was no misconduct by the prosecutors. Barr has suggested that there were improprieties by the FBI personnel involved, but most have either left the agency or been fired.