As America heads into Christmas Eve Day, it is a time to reflect and look upon the busy Christmas season for our First Lady Melania Trump and the President of the United States.

With all of the bad press about our First couple, it is refreshing to celebrate all they have done for the Christmas season. And it’s important to note our Commander-In-Chief is spending Christmas Eve Day at the White House.  (Video below.)

Melania is truly an Angel with style and grace. And America celebrates her efforts.

Melania has decorated the White House, she has traveled to see the Military men and women to lighten their days and she has stood steadfast by our President’s side.

Additionally, our First Lady has great charm and kindness. She has put together a December highlight video with the White House. She tweeted it and it is below for everyone to enjoy!

Also, during the National Christmas Tree lighting of 2018, Melania turned the switch to light our Nation’s Christmas tree.

She was dressed in a gorgeous off-white coat dress with a matching turtle neck peeking out and it was as stunning as she is! (Video below.)

Christmas is back in the White House with Melania’s style and grace.

At the time of the 2018 lighting of the National Christmas Tree, Interior Secretary Ryan Zinke introduced the President and the First Lady.

He said President Trump was the “man who brought Christmas back to America,” as reported by LifeSiteNews. It might be a big claim to make; however, most of his base would agree.

While the troops are headed back from Syria and some will arrive in time for the Christmas season, our President sits in the White House commanding our Nation to safety and security…alone.

President Trump is there because he chose to stay at the helm in solidarity with the American people and the partial Government shut down over funding for the Wall.

He tweeted moments ago, “I am all alone (poor me) in the White House waiting for the Democrats to come back and make a deal on desperately needed Border Security. At some point the Democrats not wanting to make a deal will cost our Country more money than the Border Wall we are all talking about. Crazy!”

And who can forget the famous scene when Donald J. Trump had a cameo role with Macaulay Culkin in the 1990 blockbuster, “Home Alone“? 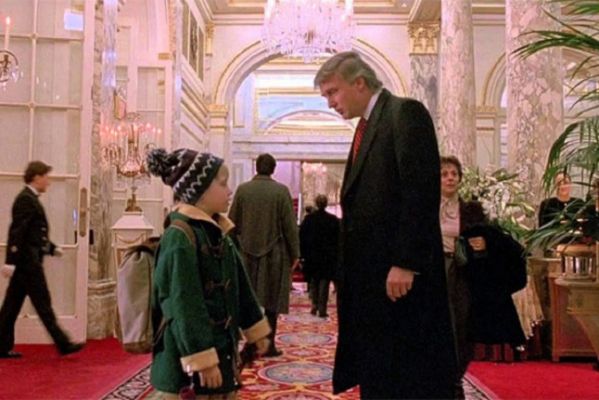 Donald Trump and Macaulay Culkin in a cameo scene from “Home Alone.” Photo credit to The Decider via screen shot.

I am all alone (poor me) in the White House waiting for the Democrats to come back and make a deal on desperately needed Border Security. At some point the Democrats not wanting to make a deal will cost our Country more money than the Border Wall we are all talking about. Crazy!

Our sweet First Lady has a December video for all of us to watch! Happy Jolly Christmas!

December at the @WhiteHouse! #MerryChristmas pic.twitter.com/ikTuuc5xEP

Watch the video below as Melania lights the National Christmas Tree in a beautiful Christmas outfit.

Watch as Zinke introduces FLOTUS and POTUS and thanks President Trump for bringing Christmas back!

The post While Trump Spends Christmas At WH, Melania Does The Incredible To Make His ‘Home Alone’ Extra Jolly appeared first on .