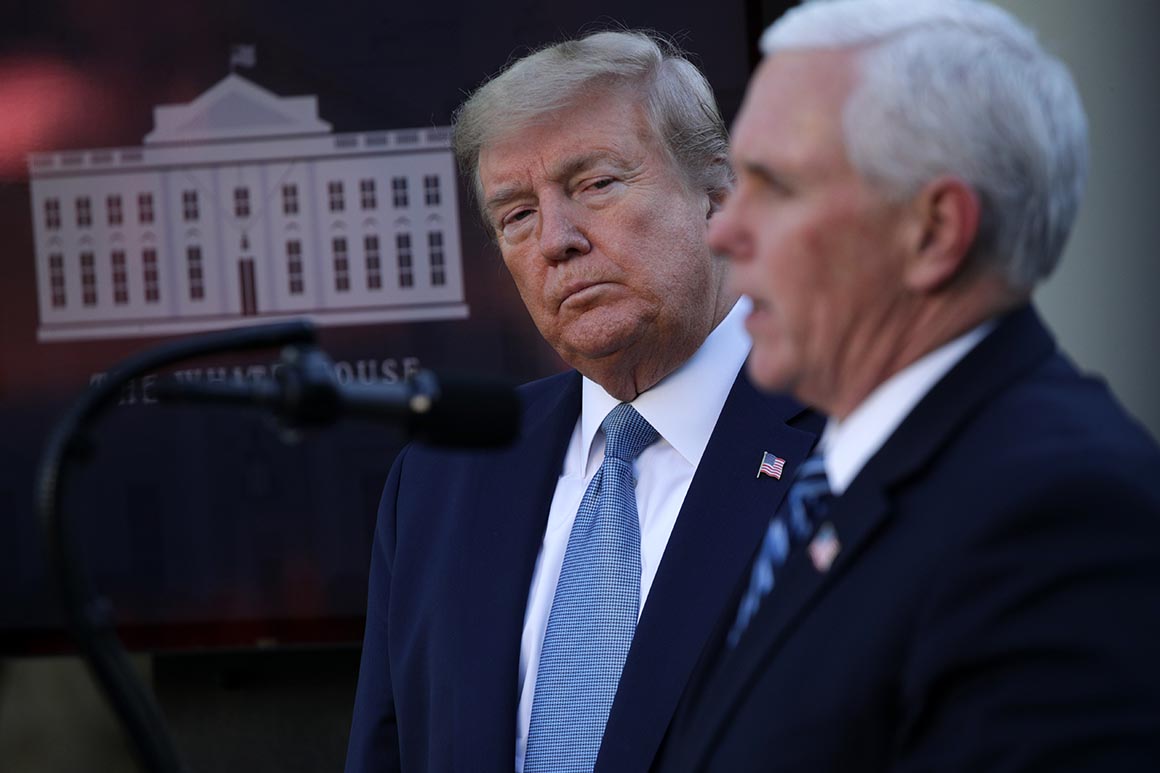 The truest test of Pence’s approach will occur in the coming weeks, as he and Trump attempt an orderly reopening of the U.S. economy — one that will require extensive cooperation across all levels of government and industry — without triggering a second viral outbreak months before the November election.

Behind the scenes, Pence has kept a close eye on nearly every internal function linked to the administration’s Covid-19 response. He consults with White House senior adviser and Trump son-in-law Jared Kushner several times each day, monitoring his efforts to partner with private sector companies and address supply chain issues across the country.

He bookends his daily schedule with phone calls to the president, and often briefs Trump in the executive dining room during the middle of the day.

And up until this week, when Trump’s newest chief of staff Mark Meadows added a trio of new faces to the White House press shop, Pence put his bare-bones communications staff — plus a few detailees from other executive departments — in charge of all coronavirus-related inquiries.

“The task force runs through the vice president’s office. That is the central nervous system of this effort; the president made it that way,” said White House counselor Kellyanne Conway.

In many ways, Trump’s No. 2 has been primed for this moment. Pence witnessed two chiefs of staff try — and miserably fail — to micromanage the president, and had a front-row seat to the impeachment trial that unfolded after the president’s third chief of staff, Mick Mulvaney, gave him free reign.

Out of the ashes of their strategies, Pence has developed his own plan for managing the government’s Covid-19 response: a way to bring order to the process in a long-disorderly environment, while yielding to Trump’s penchant for headline-grabbing moments conjured up by the president himself.

Conway said Pence — a former Indiana governor — is well-positioned for the task because he’s a “workhorse not a show horse,” and doesn’t mind ceding center stage. Trump has been known to complain about aides who take credit for positive developments within his administration, regardless of the degree of his involvement.

“Other people might bristle if they were not the star of the show … but the vice president looks at it in the exact opposite way,” she said, noting that Pence has been pleased with the ratings boost Trump’s attendance at the daily task force briefings has brought.

In recent days, Pence has personally encouraged Trump to continue appearing at coronavirus news conferences, indulging the president’s desire to remain in the spotlight even after some Republican allies suggested his unbridled participation had become counterproductive. One of those critics, former U.S. Ambassador to the United Nations Nikki Haley, was at the center of speculation earlier this year about whether Trump would replace Pence on his 2020 ticket, and is seen as a likely presidential contender herself in 2024, when Trump’s vice president is also expected to run.

“He needs to let his experts speak,” Haley told Fox News last week, adding that Trump shouldn’t “feel like he needs to answer everything” or let the briefings “be too long.”

On Monday, the task force held a 2½-hour briefing during which Trump played a controversial campaign-style video attacking the media. On numerous other occasions, the president has contradicted infectious disease experts who stood beside him on stage, sparred with reporters in the room, insulted governors who failed to demonstrate satisfactory appreciation for federal assistance and compared the novel coronavirus to the seasonal flu.

In just about every case, the vice president stood by silently as the president carried on.

Still, Pence “thinks it’s incredibly helpful to have the president there and there’s been a lot of people who’ve commented about their styles complementing one another,” said a senior White House official.

The briefings have offered a remarkably visual contrast between Trump, who routinely deviates from his prepared remarks and relishes the opportunity to punch back at his critics in front of millions of Americans each afternoon, and Pence, a more subdued figure who tends to use his time on the podium to discuss data, emphasize cooperation, express sympathy to victims and offer gratitude to health care workers.

“Other than the incessant fawning, the @VP is a far better briefer than his boss. Tries to stick to facts,” David Axelrod, a former senior adviser to President Barack Obama, wrote on Twitter following a briefing last month by Trump and Pence.

Much like the impeachment trial earlier this year for the Trump administration’s pressure campaign against Ukraine, the coronavirus crisis has underscored how the president and Pence respond differently in pressure-packed moments — and why Trump often bears the brunt of close scrutiny.

Despite the fact that his own meetings with Ukrainian officials played a prominent role in the investigation, Pence emerged from the impeachment saga relatively unscathed by both defending the president and distancing himself from key players in the probe. Trump, on the other hand, weighed in on the investigation nearly every chance he could — berating witnesses on Twitter or using key diplomatic occasions, like his visit to Davos in January, to focus on his Senate trial back home — actions that stirred up further controversy and irritated some of his own allies at the time.

Earlier this week, Trump created an additional fire for his aides to put out by claiming he could assert “total” authority over America’s governors to reopen businesses and send Americans back to work — a point Pence was forced to defend despite his own strongly stated views on the subject.