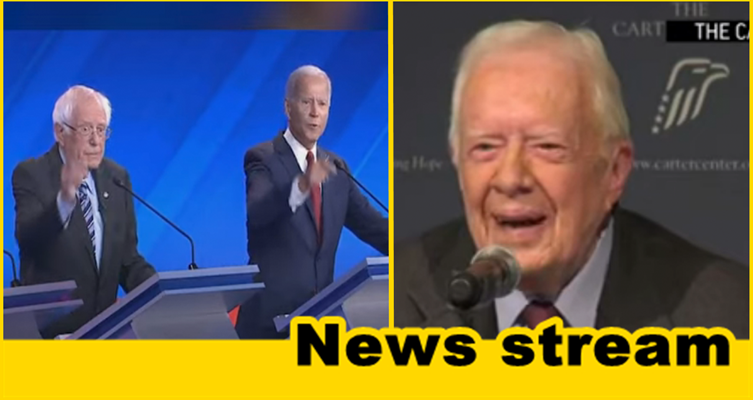 During his annual address, former President Jimmy Carter threw some subtle shade at 2020 Democrat candidates Joe Biden and Bernie Sanders, suggesting they may be too old for the job.

This was far from the first time when Biden and Bernie’s age came into question.

Former candidate Eric Swalwell made waves when he told Biden he should “pass the torch” during the first DNC debate.

More recently, 2020 candidate Julian Castro mocked Biden by asking him “Did you forget what you said two minutes ago?”

The move was called un-gracious and a “low blow” by many in the mainstream media.

Watch @edokeefe and @JulianCastro going over the transcript of the moment from the #demdabate when Castro asked Biden “Did you forget what you said two minutes ago?” pic.twitter.com/H2EYazBVDQ

NYPost reports former President Jimmy Carter said Tuesday that he believes he wouldn’t be able to be serve as commander in chief past the age of 80.

Carter, who turns 95 on Oct. 1, made the statement while answering audience questions at his annual address at the Carter Center in Atlanta.

“I hope there’s an age limit,” Carter said, but did not single out any of the Democratic 2020 presidential hopefuls by name.

Both Joe Biden and Bernie Sanders — two frontrunners early in the race — would turn 80 years old while in their first term.

“If I were just 80 years old, if I was 15 years younger, I don’t believe I could undertake the duties I experienced when I was president,” Carter added.

The former president was responding to a question about whether he would consider running for another term in office, which he is eligible for because he lost re-election to Republican Ronald Reagan.