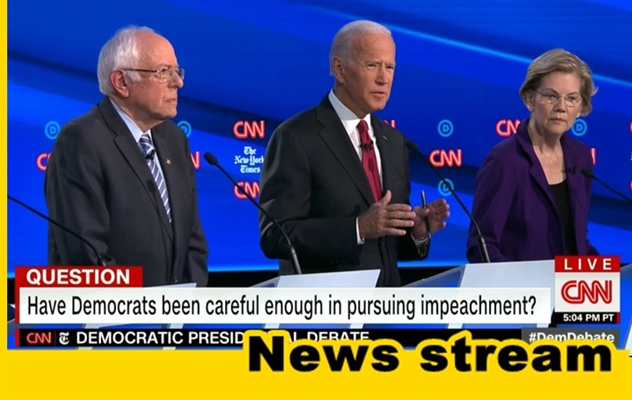 Twelve U.S. Democratic presidential candidates squared off in a spirited debate Tuesday night, all looking to confront President Donald Trump in the 2020 election, even as their Democratic congressional cohorts have accused Trump of political wrongdoing and opened an impeachment inquiry against him.

The dozen challengers all support the four-week-old impeachment probe, although Trump’s removal through impeachment remains unlikely. The candidates, however, wasted no time before telling a national television audience why Trump should be impeached by the Democratic-controlled House of Representatives to face trial in the Republican-majority Senate.

In his opening statement, former Vice President Joe Biden, one of Trump’s top challengers, declared, “This president is the most corrupt … in all our history,” an assessment echoed across the debate stage.

‘No one is above the law’

Another leading candidate, Massachusetts Senator Elizabeth Warren, said, “Sometimes there are issues that are bigger than politics. Donald Trump broke the law. No one is above the law. Impeachment must go forward.”

Trump’s opponents hurled some of their toughest attacks against the president for his withdrawal in recent days of American troops from northern Syria, leaving Kurdish fighters, who were U.S. battlefield allies in the war against Islamic State terrorists, vulnerable to an onslaught from Turkish troops invading from the north.

Biden called Trump’s abandonment of Kurdish fighters the “most shameful thing I’ve ever seen a president do.” California Senator Kamala Harris called the bloodshed in northern Syria “a crisis of Donald Trump’s making,” while Minnesota Senator Amy Klobuchar said, “Our president blew it and he’s too proud to say it.”

While mostly targeting Trump, some of the candidates aimed salvos at Warren, who has surged in recent polling, even overtaking Biden in some surveys of Democratic voters. Klobuchar and South Bend, Indiana Mayor Pete Buttigieg attacked Warren’s call for a government-run national medical insurance plan, claiming she is being evasive about how she would pay for it.

Tuesday’s debate was the fourth in a string of almost monthly get-togethers for the Democratic challengers seeking to win the party’s nomination to face Trump. But with the 12 candidates lined up on a stage at Otterbein University in the Midwestern state of Ohio, it was the largest such gathering and came as new drama has engulfed the U.S. political world about a year before voters head to the polls in the national balloting.

House Democrats opened the quick-moving impeachment probe after a whistleblower in the U.S. intelligence community raised questions about whether Trump had put his own political survival ahead of U.S. national security concerns when he asked Ukraine President Volodymyr Zelenskiy for “a favor” in a late July call. Trump called for Kyiv to open an investigation into the role played by Biden in helping oust a Ukrainian prosecutor when he was former President Barack Obama’s second in command, and also to probe the lucrative service of Biden’s son Hunter on the board of a Ukrainian energy company.

Both Bidens have denied wrongdoing, although the younger Biden, 49, told ABC News this week that he exercised “poor judgment” in serving on the Burisma company board because it had become a political liability for his father.

The elder Biden said he had never discussed with Hunter Biden his decision to join the Ukrainian company’s board, which he left earlier this year. Hunter Biden now has pledged not to work for any foreign company if his father is elected president.

Trump has repeatedly described his call with Zelenskiy as “perfect,” said he has done nothing wrong and assailed the impeachment probe as another attempt to overturn his 2016 election victory.

The elder Biden, at 76 on his third run for the U.S. presidency, is the nominal leader in national surveys of Democratic voters of their choice as the party’s standard bearer to face Trump, 73, and often defeats Trump in hypothetical polling matchups. So does Warren, a former Harvard law professor.

Biden and Warren, 70, were at center stage Tuesday, alongside Vermont Senator Bernie Sanders, a self-described Democratic socialist who currently stands as the third choice among Democrats. Sanders, 78, recently suffered a heart attack, raising questions about his health as the oldest of the presidential contenders.

Asked about his stamina to campaign for the presidency, Sanders said he would be “mounting a vigorous campaign all over this country.” Biden, who would turn 80 during his presidency if he is elected, deflected a question about his age, saying that with it “comes wisdom. I know what has to be done.”

The candidates railed against income inequality in the United States, where the income gap between corporate chieftains and everyday workers is pronounced.

“We need a wealth tax to protect the next generation,” Warren said. She has called for a 2% annual tax on the wealthiest of Americans, those with more than $50 million in assets.

“No one on this stage wants to protect billionaires,” said Klobuchar, but she stopped short of Warren’s plan. Klobuchar said she would repeal “significant portions” of tax-cutting legislation Trump pushed through Congress earlier in his administration. Biden warned against “demonizing wealth,” but he said he would double the taxation of capital gains collected by stock investors.

Buttigieg said the tax debate in Washington, however, often devolves into lawmakers “saying all the right things and nothing happens.”

The nine other candidates on the debate stage besides Biden, Warren and Sanders faced a daunting challenge, how best to distinguish themselves from the front-runners and gain new traction in national polls and surveys of voters in states where Democrats are holding party nominating contests starting in February.

All nine currently are polling in the single digits, compared with Biden and Warren in the upper 20% range, with Sanders about 15%.

When the candidates next debate, on November 20, the national Democratic party has set the standards even higher to gain a spot on the stage. The candidates must have bigger polling numbers — at least 3% support in four national polls or 5% support in polls of people in states that are early on the voting calendar — and more financial support, from at least 165,000 individual donors.