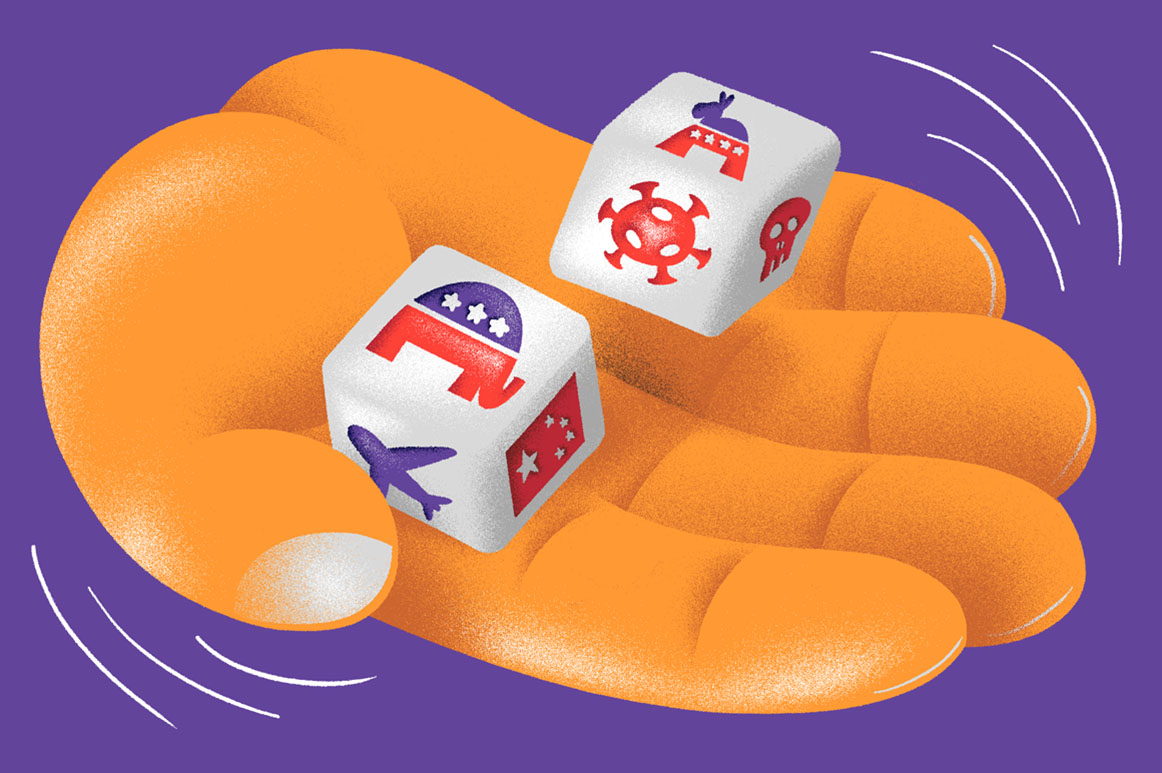 Then there are bets on the slim-chance characters like Hillary Clinton—“silly money,” says Paul Krishnamurty, a professional gambler and analyst at PoliticalGambler.com. The odds for Clinton, though low, have been fairly consistent since the fall. Krishanmurty says it’s not surprising to see at least a few bizarre bets on outlier candidates from people taking a chance on a huge payout.

Make no mistake—gamblers don’t think we’re likely to see a President Cuomo or President Pence. On Bovada, a major online sports gambling site, Cuomo is 33-to-1, meaning a $100 bet on Cuomo would win $3,300 if, by some bizarre twist, he were actually elected in November. A bet on Pence or Clinton would net $5,000. (To put it in perspective, Pete Buttigieg had 5-to-1 odds in the days after it looked like he could win the Iowa caucus, which sank to 50-to-1 just before he dropped out.)

Outside the presidential campaign itself, gamblers are also betting on the uncertainty of elections being held at all—a concern that has grown as more than a dozen primaries were postponed because of the coronavirus. Oddsmakers predict the election to continue as planned (Trump can’t change the date of the election without congressional approval), but on one website, at least, odds are 1 in 6 that voting won’t happen on November 3.

Will coronavirus actually end Trump’s presidency? The odds of the president serving an incomplete term have been on the rise since the virus began slamming the economy, and currently stand at 4.9 to 1 on Bovada—though they’re nowhere near as high as they were during the investigation of former special counsel Robert Mueller. Before coronavirus, the president had been on a roll, with the odds of completing a full term as high as they had been since his inauguration.

And Cuomo isn’t the only governor whose handling of the coronavirus outbreak has attracted attention from the gambling world. Gretchen Whitmer, the governor of Michigan, has gone from a relative longshot to No. 2 or No. 3 in the Democratic vicepresidential stakes, behind only Senators Kamala Harris and Amy Klobuchar. Whitmer, who sparred with Trump over the federal coronavirus response and is overseeing one of the country’s largest coronavirus hotspots, has been floated by Biden as a potential vice president.

What else will coronavirus do to the world? Smarkets, a London-based online betting exchange that offers markets for sports, politics and current events, now has a whole section of its site dedicated to Covid-19 bets. Even with sports gone quiet, Sarbjit Bakhshi, Smarkets’ head of political markets, says the site has never been busier.

“At the beginning of this coronavirus stuff, we were just trying to think of every single angle,” Bakhshi says. “Anything we can get data on, where there’s a clear stop and start, we’re doing it.”

A few other gambling sites have followed suit. Think there will be a recession before the end of Trump’s first term? Bovada predicts a roughly 88 percent chance of it happening, and you can wager on the economy to continue its crash. Want to bet on when Delta Air Lines will start flying to mainland China again? You can put money on flights resuming before May 31. Money is being wagered on everything from the American unemployment rate in May to the date the United States will lift its travel ban on Europe’s Schengen Area to whether or not the London Marathon will be held in October.