Writing in the Miami New Times, Campbell argued many blue-collar African Americans, especially men, had made up their minds not to vote for the onetime prosecutor. He lumped her in with politicians who have denied defendants rehabilitation and targeted innocent people.

And in a riff that critics slammed as sexist, Campbell questioned Harris’ marriage to a white man. He even suggested she used a romantic relationship with former San Francisco Mayor Willie Brown to advance her career.

“Like everyone else, black voters want help from one of their own,” Campbell wrote, slipping in that Harris’ mother was from India. “The Bushes made sure their people got oil money. Bill Clinton let the telecommunications industry gobble up small radio and TV stations. And Donald Trump is looking out for his developer buddies through a tax cut and opportunity zones that gentrify minority neighborhoods. Meanwhile, Harris has let black people know they can’t count on her.”

So it was more than a little curious when Campbell announced very publicly he’d changed his mind. In an Instagram video last week, he said he and Harris had recently talked on the phone about her record and presidential priorities, from gun control to the rehabilitation programs she started. Campbell said he wanted to determine whether she’s a “real sister.”

“I went back and looked deeper at the record,” Campbell said in an interview with POLITICO. 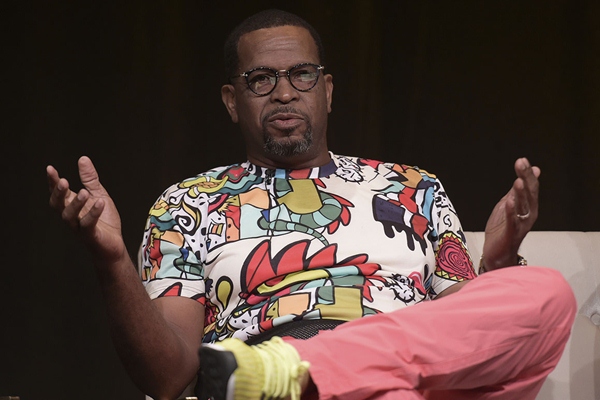 But the story of Campbell’s about-face isn’t so simple: It’s a window into how Harris is working to allay skepticism of her among African Americans — particularly black men wary of her background in law enforcement — and of how far she has to go to make inroads with a critical constituency that Joe Biden so far is dominating in the polls.

Harris and her surrogates routinely reach out to black influencers like Campbell, in most cases before they might publicly air any concerns. The campaign at times dispatches its chairman, the candidate’s sister, Maya Harris, whose background in criminal justice reform and close relationship with the senator help provide insight only she could.

That Campbell could make the unexpected turn gives hope to an underlying theory Harris advisers have: that her courtroom experience will prove more of an asset than an anchor. But people on the outside involved in the discussions with Campbell stress that his hesitation underscores the work Harris must do to introduce herself while fleshing out her motives as California’s attorney general and the district attorney of San Francisco.

“She obviously has bona fides in certain parts of the black community: She’s an HBCU graduate, an AKA. She is a black woman in every sense of the word,” said Tiffany Cross, founder and managing editor of the Beat DC, a newsletter on the intersection of politics, policy and people of color, referring to Harris’ time at Howard University and in the oldest African American sorority, Alpha Kappa Alpha.

“But the black community is not a monolith,” Cross added. “In certain parts of the black community, HBCUs and AKAs just don’t resonate. And, when people only hear whispers that you were the prosecutor who locked up black men, that’s something that’s an uphill climb. The campaign is trying to combat it, and trying to address it, but they have a long way to go.”

To Harris, Campbell represents a hard-to-reach demographic she’ll need to convince. Campbell, whose raw lyrics and videos with scantily clad women put him at the center of free speech fights decades ago, calls it the “silent majority” that powered Barack Obama.

Campbell’s evolution on Harris unfolded over many months. It started with calls from a surrogate and ended with Harris herself. In between, the rapper said he heard from a Florida congresswoman who endorsed Harris. He got beat up in testy interviews and at home: His wife, sister-in-law and mother-in-law are AKAs. He said they all really like Harris.

Campbell’s New Times column landed online like a thunderclap. Symone Sanders, then a free-agent Democratic strategist who later took a job with Biden, essentially told Campbell to shut up.

“Uncle Luke is no political mastermind or strategist,” Sanders tweeted at the time. “Why do black men keep popping up with their unsolicited opinions about Kamala Harris?”

But Cross, who brought up Campbell’s piece on Joy Reid’s MSNBC show, gave it more credence. In an interview, she said critics need to consider that Campbell is viewing Harris through the lens of black men who are disproportionately affected by the justice system.

Behind the scenes, Harris surrogates were treating the put-downs seriously. Bakari Sellers, a former state lawmaker from South Carolina, immediately reached out to Campbell. Democratic activists have said Campbell is a respected and even feared voice in Florida politics and has an extensive following among middle-aged African American men nationally.

“He’s someone that you want on your side,” Sellers said when asked why he took it upon himself. “Luke can have the conversations that you can’t have.”

Days after connecting with Campbell, Sellers appeared as a guest on the musician’s podcast. Campbell still seemed indifferent toward Harris, even after Sellers touted her advocacy for women and children who suffered from abuse.

Then, last month, thousands of African American journalists arrived in Miami for the National Association of Black Journalists conference. Campbell sat for an interview with Cross. She brought up his column about Harris, noting a lot of people considered it sexist.

In his piece, Campbell had taken issue with Harris’ marriage to Doug Emhoff, describing him as “a rich white lawyer.” He also called her a “mistress” of Brown, “a powerful black man.”

Cross wanted to know when he became the moral authority on relationships.

“I mean, should we revisit ‘As Nasty As They Wanna Be,’ and all the albums and things you put out about women?” Cross asked. She said it was fair game to probe Harris’ record, but the personal shots went too far.

When it was over, she texted a contact at the Harris campaign. Cross felt like Campbell was open to persuasion.

“It wasn’t combative, but he didn’t have a counterpoint to a lot of the things I raised with him,” she said.

Campbell did another long interview at the Miami event, this one with The Atlantic’s Jemele Hill, who previously had Harris on her show. Late in the podcast, the senator came up again. Hill argued Harris had created one of the most progressive prisoner reentry programs in the country. Hill also told Campbell he should pay attention to Biden for not apologizing for his tough-on-crime record.

Campbell’s aversion to Harris was melting.

“Out of all the candidates, I really like her the most,” he eventually told Hill. But Harris needs to overcome the perception of being a powerful black woman who went after black men to prove herself, he said. On the show, Campbell mimicked black politicians who avoid advocating a black agenda.

Hill wrapped with a promise to her listeners: “Kamala fans,” she said, “I got him. As soon as we stop taping this podcast, I got Luke. I’ma bring him over. Don’t worry about him.”

By the time Harris reached out to Campbell, on Aug. 15, the previous conversations had left such an impression that he’d come around to her.

Campbell told POLITICO Harris talked about her reentry initiative to lower recidivism among low-level drug offenders. She said she wants to change how credit scores are calculated to boost black homeownership. He told her he supports allowing law-abiding people to keep guns for protection. Harris volunteered that she has a .45-caliber gun herself — for protection, Campbell said.

The fact that Harris came to him even after his personal attacks made a big impression.

“That got me more than anything. That I could write all those tough words … that I could say what I did on those interviews, and she’s woman enough to say, ‘Let’s have a conversation,’” he said. “Most men, they take it personal, take their little toy and they go sit down.”

Before deciding on the endorsement, Campbell said he kept reflecting on the first Democratic debates, thinking who could really take on Trump. Biden, he said, is too old. Bernie Sanders “is just going to go up there and start screaming.” He believes Elizabeth Warren reacted “in a little fragile way” by releasing a DNA test to prove claims to Native American ancestry. Her support for reparations for descendants of slaves didn’t help, either. “We as African Americans know that’s not going to happen,” he said.

And Campbell said he doesn’t think Cory Booker’s message is resonating: “He gives us a black history lesson every time he talks.”