One of this election cycle’s surprisingly effective small-dollar fundraising drives isn’t poll-tested or data-driven, nor is it spearheaded by teams of young, underpaid and overworked political operatives.

Instead, two middle-aged senators with a combined 1.3 million Twitter followers are raising boatloads of cash for Democratic Senate candidates simply by taking their personal texting conversations onto the social media platform for the whole world to see.

It’s a loosely organized, low-risk, high-reward effort that started earlier this year on a whim when Sens. Chris Murphy (D-Conn.) and Brian Schatz (D-Hawaii) saw a Democratic takeover of the Senate within reach. And the incessant, often desperate-sounding fundraising emails weren’t going to cut it this time, the Twitter-savvy lawmakers reasoned.

The pair is aiming to capture the enthusiasm on the left ahead of the Nov. 3 election, in which small-dollar donors have fueled Democratic presidential nominee Joe Biden’s massive fundraising advantage over President Donald Trump. And with Democrats on the cusp of winning back the Senate, they’re working outside the party apparatus to amplify candidates who were all-but written off by the establishment.

“When you’re on especially Twitter, all you’re doing is worrying or getting enraged. All you’re doing is doom-scrolling,” Schatz said. “And this is a way to channel that anxiety into something constructive for the country.”

Murphy and Schatz — ages 47 and 48, respectively — emphasized in interviews this week that Democrats will not win back the Senate without competing in states where Republicans have historically dominated. Using their influence on Twitter to their advantage, the senators started elevating what were widely considered to be second- and third-tier races to the top of the party’s list; the outcomes of those same races are likely to determine which party controls the Senate come 2021.

To any objective observer, their efforts have been successful, raising nearly $4 million for Democratic Senate campaigns since April with virtually no organization. While they often enlist some of the party’s social media big-shots like Sen. Cory Booker (D-N.J.), who has more than 4.6 million Twitter followers, Murphy and Schatz attribute their success to what they describe as their authenticity on social media platforms — they’re actually friends — in stark contrast to the canned talking points, crafted by teams of aides, that usually populate senators’ Twitter feeds. In other words, they insist, it’s not an act.

Their Twitter fundraising pushes read like pep talks intertwined with innocuous anecdotes. In one tweet this week, Murphy exclaimed “c’mon team — LFG,” an acronym for “let’s f–ing go,” in a fundraising appeal. In another, Schatz jokingly recounted a “terrifying” experience when Booker visited him in Hawaii: “We had vegan food and went snorkeling.”

But Republicans openly acknowledge the organic efforts undertaken by Murphy and Schatz haven’t been replicated on their side. Sen. Lindsey Graham (R-S.C.), who is facing an insurgent challenge from Democrat Jaime Harrison, said it was to his party’s own detriment. Harrison raised a record-shattering $57 million in the third quarter this year.

“Traditional fundraising is still there, but the social media — I mean, my opponent, to his credit, it’s just been incredible what ActBlue has been able to do,” Graham said, though he quipped: “Me breathing helps [Harrison] raise money.”

“If you don’t have a social media fundraising strategy, you’re in trouble,” Graham added.

Back in April, Murphy and Schatz began with the goal of increasing the name recognition of largely unknown Democratic Senate candidates in red states who were written off from the start. In particular, they focused on races where the party’s apparatus was spending negligible amounts of money.

“These fundraising events are as much about raising the profile of the race, especially for these second-tier races, as they are about raising a couple hundred thousand dollars,” Murphy said.

It amounts essentially to “windfall money,” as Schatz describes it. It doesn’t require the campaign to spend any money on fundraising appeals, and it takes almost no time for the senators themselves, who are often planning their Twitter fundraisers in between committee meetings and votes on the Senate floor — even while Schatz is back home in Honolulu, with a six-hour time difference.

Beneficiaries include Democratic Senate candidates in states that were long considered uphill battles, including Jon Ossoff and Raphael Warnock in Georgia, Harrison in South Carolina, M.J. Hegar in Texas, Theresa Greenfield in Iowa, and Steve Bullock in Montana. They even raised $263,000 for Al Gross, the independent candidate in Alaska’s Senate race. 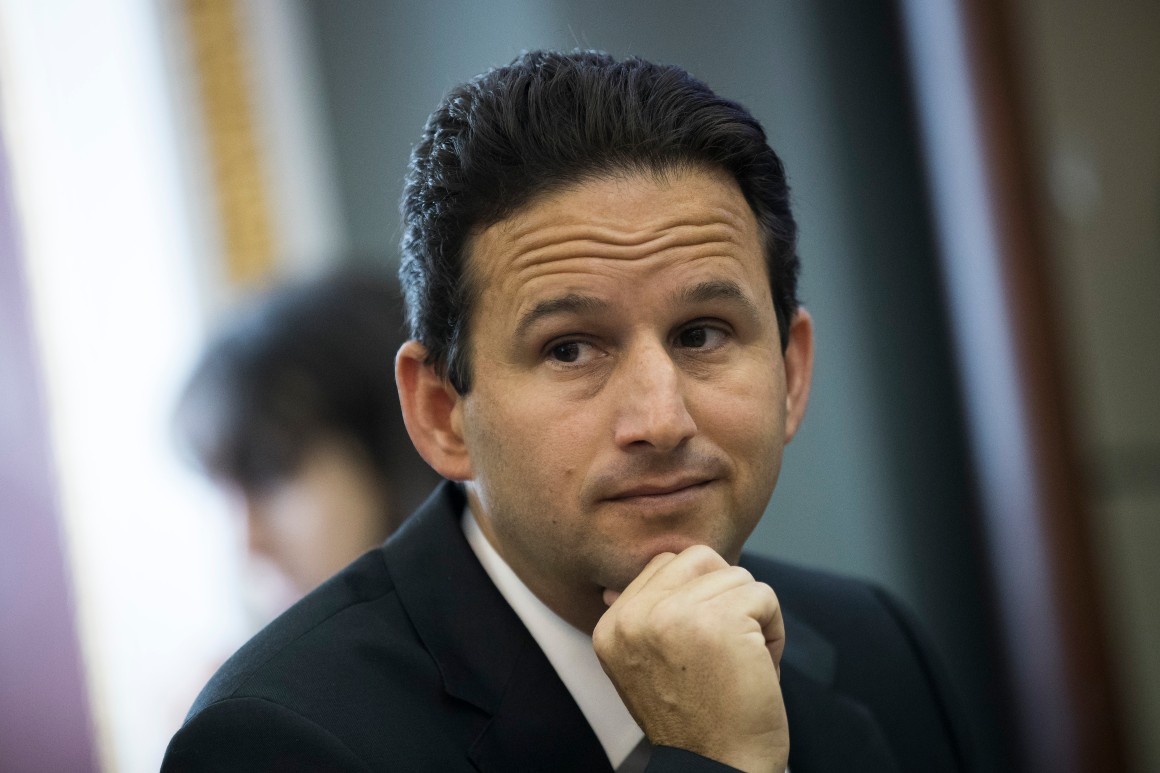 “It’s just important not to have just a couple of stars in an election cycle who vacuum up all the money, and then a bunch of otherwise viable candidates who are starving for resources because they haven’t become an internet sensation,” Schatz said.

Some on the left have questioned the fundraising efforts on principle, particularly given that Democrats largely believe in campaign finance reform. “After we win can we please stop pouring so much money into elections?” one user tweeted at Murphy on Sunday. “Ok. But not until we win,” Murphy replied.

Indeed, Democrats have long complained about the influence of super PACs and corporate donors on American campaigns, and they’ve called for large-scale reforms to level the playing field. In the meantime, Murphy and Schatz want to use the system to change it, in part by leveraging small-dollar donations to combat the big money from super PACs, which are deployed on behalf of both parties.

“What Brian and I have been trying to do is figure out how to combine the kind of authentic political conversation that is available on Twitter along with the ability for the participants in those conversations to make donations, in large numbers, to Senate races,” Murphy said.

Their tweets don’t read like the fundraising pleas that campaigns blast to their email list a dozen times per day. The senators are repeatedly asked whether they run their own Twitter accounts, and the answer — an emphatic “yes” — is one that they jokingly say instills fear in their communications directors, like the time Schatz did an “ask me anything” Twitter session during a long flight home. “Jesus. This again?” communications director Mike Inacay tweeted back at him.

“It’s not without its dangers, given that we’re in the positions that we’re in that we can sometimes say goofy or embarrassing things,” Schatz acknowledged. “But it is that un-intermediated, relatively normal-sounding dialogue that I think causes people to believe, correctly, that it’s actually us operating the accounts and that we’re just like other people, feeling anxiety, walking from meeting to meeting and figuring out how we can maximize our positive impact.”

While Democrats increasingly find themselves on offense this year, Murphy and Schatz haven’t forgotten about states where the party needs to defend its incumbents like Sen. Gary Peters (D-Mich.), who is facing a competitive reelection bid against Republican businessman John James.

“They’ve got a real reach with a lot of enthusiastic Democrats,” said the low-key Peters, whose campaign raked in a whopping $679,000 just from a one-day Murphy-Schatz Twitter fundraiser. “It’s great how they’ve built that platform up.”

Their efforts have drawn so much interest that institutional arms of the party like the Democratic Senatorial Campaign Committee have reached out to the senators to “put in requests,” Schatz said with a laugh. In the end, Murphy and Schatz say they want to be the ones calling the shots.

“What we do is not what the institutional Democratic Party does,” Schatz said. “And we don’t want to become an arm of it, because then it loses its value.”

Murphy and Schatz began the effort knowing that things could get awkward with the GOP senators they interact with almost every day whose challengers are benefitting from their massive boosts.

In the past, senators observed so-called “gentlemen’s agreements” that they wouldn’t openly campaign against one another in order to preserve at least some semblance of bipartisan comity within the institution. But it’s the year 2020, so traditions are out the door.

“But in the past, one party wasn’t ramming through a Supreme Court justice a week before the election,” Murphy said emphatically. “So I think we’re operating with new ground rules. … They shouldn’t be surprised.”

Both senators have enjoyed cordial relationships with Republicans, and said their crusade to drive many of those same GOP senators out of office hasn’t really changed that.

When asked about Murphy’s and Schatz’s efforts to oust him, Graham replied: “This is a business. I like them both. But it’s a business.”