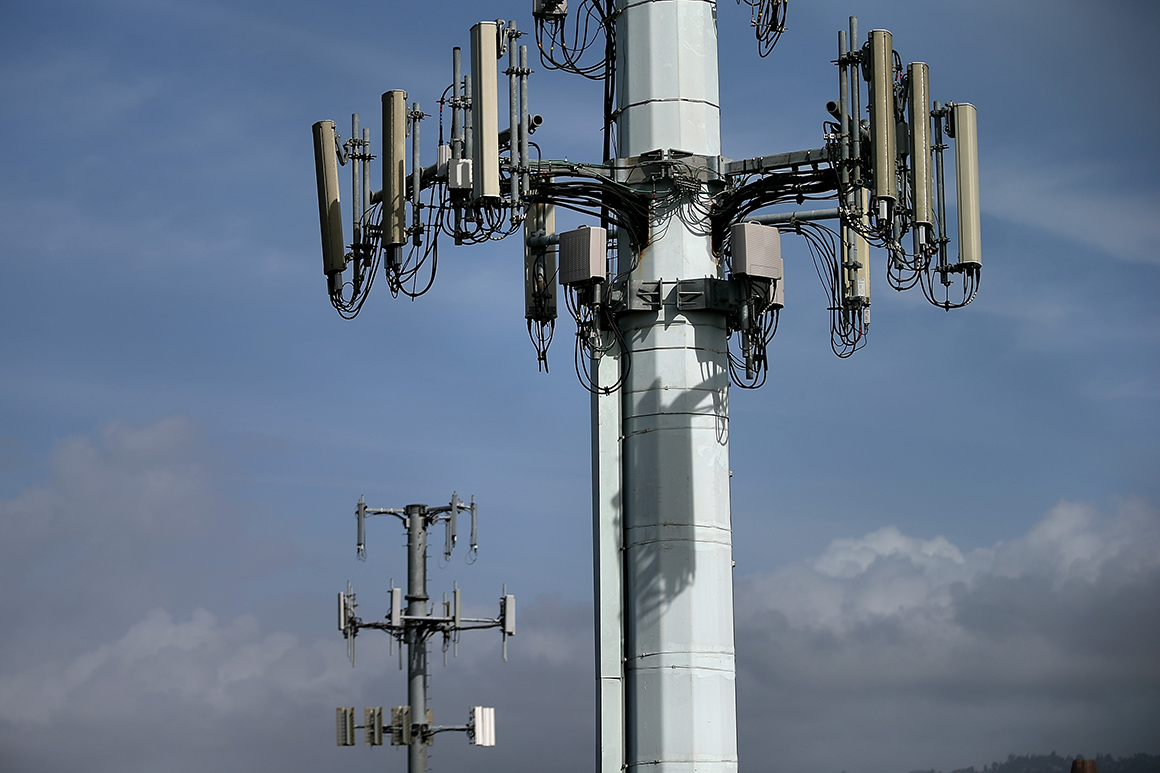 Such choices “will help ensure the Company is well positioned when the pandemic passes and economies begin to recover,” AT&T added.

Connectivity is having a moment in a hunkered-down nation, with every Skyped play date and Slacked workplace conversation calling new attention to the benefits of ubiquitous internet adoption, even at existing 4G or slower speeds. That can only fuel a hunger for bigger, faster, more abundant broadband — a demand that may aid the wireless industry’s quest for assistance in clearing away regulatory obstacles.

“Now’s a time when everybody’s seeing you need it,” Jonathan Adelstein, a former FCC commissioner who leads the Wireless Infrastructure Association, told POLITICO. “It really is opening people’s eyes hopefully to how important this is. And when we get 5G, it’s going to be even more exciting.”

Trump drove home that message in a conference call Tuesday with companies including AT&T, Verizon, Comcast and Charter Communications, thanking them for keeping the country running. “With business at a level that nobody’s seen it before on the internet, it’s holding up incredibly well and they expect that to continue no matter what happens and no matter how much more it gains,” Trump told reporters at a briefing that evening.

That’s a departure from the criticism that Trump and his allies have leveled at some of the same companies, such as his campaign manager’s accusations that Verizon is wildly overstating its 5G service in the U.S.

For now, the giant communications companies haven’t received any special share of the trillions in economic rescue dollars that Capitol Hill is doling out in response to the pandemic, although they could benefit indirectly from $200 million provided for the Federal Communications Commission’s telehealth programs. (The bill also provided millions of dollars to support long-running Agriculture Department broadband subsidy efforts.) But the industry has sought Washington’s assistance in expediting wireless buildout by sidestepping some of the required state and local regulatory approvals — a proposal that Senate Republicans privately pushed for during Congress’ recent stimulus negotiations, one GOP congressional source told POLITICO.

A fourth round of virus-related stimulus spending could include hundreds of millions to help bolster online learning endeavors, something Republicans floated during the negotiations for the most recent bill. Democrats had proposed several billion dollars for similar efforts as well as money dedicated to helping keep low-income Americans digitally connected.

The industry is also making efforts to win the good graces of consumers in need. Cisco, which makes the wireless switches and routers that much of the internet runs on, has pledged $225 million to help with global recovery efforts. AT&T created a $10 million fund aimed at helping families and teachers with remote learning tools. Verizon and T-Mobile are expanding more affordable calling plans, while hundreds of large and small internet service providers have pledged not to cut off consumers struggling with the pandemic, even those who cannot pay their bills right away, and some communications companies have waived policies capping data usage.

The wireless industry has also spent years touting its investments in U.S. communications architecture — $275 billion for next-generation wireless, according to one popular industry estimate — and says 5G will create spill-over effects to a broader connected economy, generating new jobs and stimulating commerce.

And as a record-breaking 3 million employees applied for unemployment benefits last week, the companies building 5G have said they are facing an enormous shortage of skilled labor. The industry for months has sought millions of dollars in government assistance in training workers more quickly, something it says could benefit both the telecom companies and the many newly laid-off workers.

Wireless providers are also embroiled in lobbying fights with countless players, from the Pentagon to utility companies, in their hunt for slices of spectrum that can carry 5G signals. But the carriers are still optimistic that the U.S. can dominate 5G as long as the Federal Communications Commission keeps selling off airwaves as scheduled, said Nick Ludlum, senior vice president for trade group CTIA.

The virus has caused some slowdown, however. The commission recently postponed a 5G airwaves auction set to start in June by one month because of the pandemic. An international standards body has also delayed the rollout of a set of key technical standards for 5G after the virus forced the cancellation of some of its meetings.

Technology news from Washington and Silicon Valley — weekday mornings, in your inbox.

And as employers fear the spread of the outbreak, infrastructure work is proving a challenge. The FCC has pointed to at least one tower company that’s suspended work for weeks because of the virus. That’s in addition to a slowdown in local government approvals for 5G installations given the degree to which the outbreak has consumed municipality and state officials’ attention. Some wireless builds are “grinding to a halt or close” to it because of a lack of municipal permitting and zoning approvals, Adelstein said.

“In the short term, we understand that municipalities may need to adjust their usual practices or even in some cases issue work stoppages,” said Zenia Zaveri, vice president of external affairs for infrastructure company Crown Castle. “We will work through it together, in real time.”

In some states, quarantines are preventing work entirely — although the Department of Homeland Security has circulated a letter declaring some communications infrastructure work an essential function that should continue to operate during the crisis. The department officially declared communications workers essential in a public update on Saturday.

Adelstein also urged the FCC to act on longstanding petitions from the wireless industry, asking the commission to streamline the amount of local approvals required for wireless projects, such as when companies add 5G gear to existing towers, and automatically approve building applications if local officials haven’t acted in a certain time frame. The industry is also examining what emergency powers the FCC may have to speed efforts along.

But even these infrastructure players anticipate long-term gains. Sitetracker, a company devoted to critical infrastructure deployments, surveyed a mix of companies in early March and found that 44 percent of carriers believe the coronavirus pandemic will increase demand for telecommunications infrastructure, given the rise in households living and working remotely.

The telecom giants “know that the time could be right,” said Nicol Turner Lee, a fellow at the Brookings Institution. “The climate is probably right to get more people online, do a 5G connection. … We’re going to need faster connectivity to be able to perform the fundamental tasks that need to be done to keep people safe, informed and healthy.”