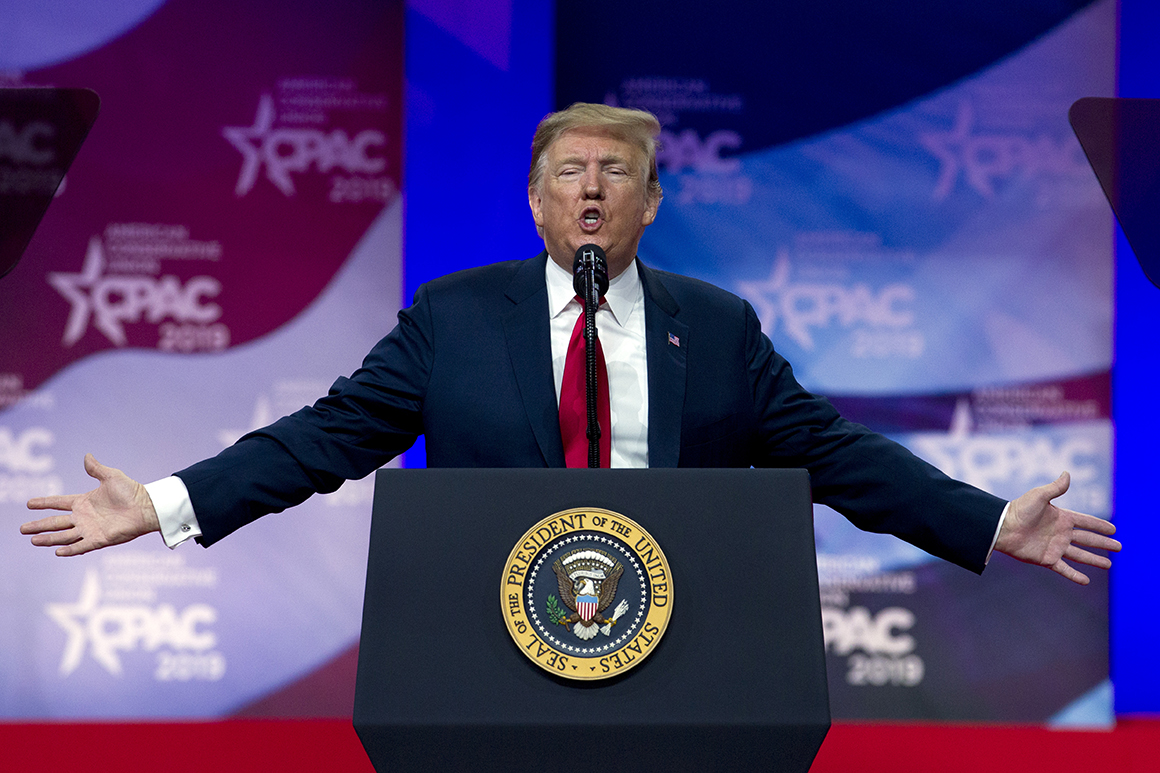 Team America is led by one man: Donald Trump. The president’s emissaries were everywhere at the event, hosting panels focused on teaching the attendees how, exactly, they could help Trump defeat socialism in 2020. The conference was a boot camp for what Trump campaign spokeswoman Kayleigh McEnany called the “Army of Trump” during a Wednesday panel.

“I’ll see every one of you on the barricades,” promised K.T. McFarland, Trump’s first deputy national security adviser, who recounted her FBI interview during Robert Mueller’s Russia probe, drawing boo and cheers at the right times.

Others echoed the rallying cry, from former U.S. Ambassador to the United Nations Nikki Haley — “Don’t attack socialism, defend capitalism” — to Tennessee Sen. Marsha Blackburn — “We need a CPAC full of happy warriors to deploy across the country.” Speakers compared the upcoming election to a “Star Wars”–esque fight against the socialist left “Empire.”

The approach is a microcosm of how Trump’s team is approaching the 2020 election: establish an emotional “us vs. them” dichotomy, energize the president’s most loyal supporters with battle-themed rhetoric and link every Democratic policy to socialism, socialism, socialism. Already, the strategy is being reflected in the president’s own communications. He has adopted similar language in his rallies and amped up attacks on “Crazy Bernie” as the self-described democratic socialist surges to the front of the Democratic presidential primaries.

At CPAC, Trump campaign officials worked to train attendees. They hosted panels teaching people how to carve out time for activism and deploy talking points on the Second Amendment, immigration, abortion and the culture wars. The sessions sometimes went granular, with one focused on how to talk to undecided voters on the phone.

As Rep. Dan Crenshaw (R-Texas) put it on Wednesday in a PowerPoint presentation: “You’re here to fight for the story of America. Fighting means winning. Winning means persuading.”

To make sure that activists attended these sessions, CPAC offered an incentive: if they attended one or more “Direct Action” sessions and checked in with the QR code on their badge, they could win reserved seats at Trump’s speech at the conference on Saturday, skipping the hourslong line.

In the famous CPAC marketplace, the Trump campaign had set up a glitzy, looming booth selling official swag. Elsewhere, booths that in years past had been staffed by activists hawking pamphlets were now filled with vendors pushing apps for registering voters. In another corner, a video featured an “Epic Rap Battles of History”-inspired duel between Ludwig von Mises and Karl Marx played on an endless loop. The title: “Capitalism vs. Socialism.”

The schedule, too, was packed with events reminding the audience of the real enemy: “Socialism: Wrecker of Nations and Destroyer of Societies,” “Socialism and The Great Awokening,” “The Ills of Socialized Medicine,” “The Global Struggle for Resources and the 21st Century Socialist Axis of Evil” and “Stopping Socialism: Exposing and Defeating the Socialist Plot to Hijack America.”

Attendees, feeling safe from potential protesters after going through several security checkpoints to get into the main hall, said they were excited to be among their own.

“We love being around like-minded people. It makes you feel comfortable,” said Priscilla Confrey, founder of New Jersey Women for Trump, who was attending her fifth CPAC and had brought her children.

Confrey said she hoped to teach her children about the state of conservatism.

“I’m very concerned about the socialism platform they’re trying to push, and I want my children to learn about it, so that one day, when I’m not here, they know that for themselves, what’s happening.” Next to her stood her teenage daughter, modeling a red evening gown from MAGA fashion designer Andre Soriano, with “TRUMP” printed on the train.

For years, CPAC has always hailed itself as a place for the next generation of right-wingers — activists, politicians, staffers, thinkers — to meet one another, learn valuable skills and begin a career in professional conservatism.

But this year was about defending Trump now.

As the crowd packed into the main hall to hear speakers like Vice President Mike Pence, sponsors ran ads saying the country is at a “crisis.”

Notably, over a dozen Cabinet and other senior officials were scheduled to speak, from Secretary of Transportation Elaine Chao, top immigration official Ken Cuccinelli and Health and Human Services Secretary Alex Azar, to the White House’s Ivanka Trump and Kellyanne Conway.

In the past, a former CPAC organizer told POLITICO, many of these officials would not have attended because of concerns that it would violate the Hatch Act, a little-enforced law that prohibits executive branch officials from certain political activity. But, like many other norms in the Trump era, that expectation has been eradicated.

“I mean, elected officials are one thing, but we would have never invited a Cabinet secretary,” the organizer said.

Another CPAC tradition that’s been eradicated under Trump? Dissent.

Even in the years when a Republican held the White House, there would always be a voice at the 46-year-old conference dedicated to tearing down the president, said columnist Mona Charen, who was booed at CPAC 2018 for criticizing Trump.

That lasted through the George W. Bush years, added Matt Lewis, who was named CPAC Blogger of the Year in 2010.

“Criticizing Bush didn’t make you a bad conservative. That actually made you a good conservative if you were criticizing him from the right,” he said. “It meant that you are being intellectually totally honest and that you weren’t a partisan hack.”

And whereas George W. Bush made a polite, perfunctory visit to CPAC once during his presidency — at the very end — Trump and his political allies were across the main stage, through the media hall, and at the breakout discussion panels. There were book signings with Sebastian Gorka, the ex-Trump adviser and all-purpose Fox News Trump defender, and Tom Fitton, the Judicial Watch head who floods the government with federal records requests.

But the laser focus on fighting socialism — a unifying and extremely broad concept — allowed all conservatives to unite under the Trump umbrella.

Pence, as he often is, was notably sunnier than his MAGA brethren, trumpeting the state of the economy, the appointment of conservative judges and the sections of the southern border wall that are being built. Nevertheless, he had a stern warning, perfect for the crowd.

“Let’s be clear: it isn’t just about Bernie. Despite what the media loves to tell you, there are no moderates in this Democrat field,” he said. “Every one of the other Democrats running for president embraces Bernie’s socialist agenda.”

And then he left to the song of training montages everywhere — “Eye of the Tiger.”