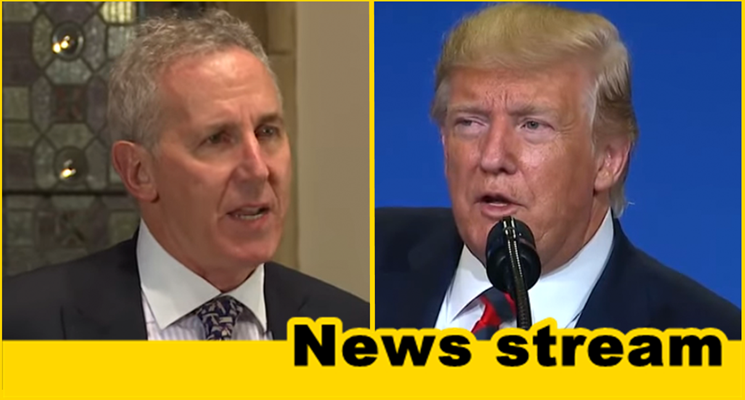 During a Reddit AMA “Art of the Deal” ghostwriter Tony Schwartz called President Trump “the most purely evil human being” he has ever met. 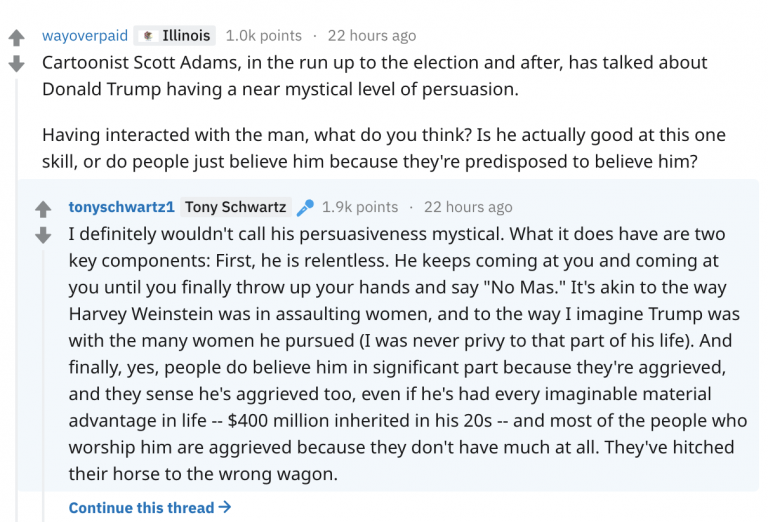 Schwartz answered a question about Trump’s mystical level of “persuasion” where he argued most Trump supporters who “worship him” are aggrieved and “don’t have much at all.”

I definitely wouldn’t call his persuasiveness mystical. What it does have are two key components: First, he is relentless. He keeps coming at you and coming at you until you finally throw up your hands and say “No Mas.” It’s akin to the way Harvey Weinstein was in assaulting women, and to the way I imagine Trump was with the many women he pursued (I was never privy to that part of his life).

And finally, yes, people do believe him in significant part because they’re aggrieved, and they sense he’s aggrieved too, even if he’s had every imaginable material advantage in life — $400 million inherited in his 20s — and most of the people who worship him are aggrieved because they don’t have much at all. They’ve hitched their horse to the wrong wagon.

Usually, when you move on from a job, the incredibly irritating aspects of former colleagues turn into foibles on which burnished anecdotes hinge on. You treat them more kindly in retrospect, now that you don’t have to breathe the same air as them eight hours a day. It functions like entropy, but specifically for people who heat fish up in the microwave.

Donald Trump apparently does not enjoy that effect. His ghostwriter on The Art of the Deal, Tony Schwartz, told Reddit during an Ask Me Anything session that the president is “the most purely evil human being” Schwartz has ever met.

“I believe deeply that most people are better than their worst behaviours,” he wrote. “I also believe there are some who are simply irredeemable and evil. [Psychiatrist and author] Scott Peck called them ‘People of the Lie’. They lack any conscience, as Trump does, and so they’re almost purely evil. Trump is the most purely evil human being I’ve ever met, and also the most insecure.”

The worst thing about working with Trump? “The shortness of his attention span and his utter lack of interest in anything but himself.”

Schwartz has spent the last few years doing a very public form of penance for helping to build the edifice of Trump as a master businessman by dragging him at every opportunity. He added that the biggest change in Trump since the time Schwartz worked with him was that he’d become more rabidly horrible.

“If he had any ideology when I met him, it was faintly libertarian,” Schwartz said. “As in: You do whatever you want to to do so long as it doesn’t get in the way of my doing whatever the hell I want to do. In the last few years I believe he has moved relentlessly to the right. He’s become more nativist, racist, narrow-minded and he’s now just a shade to the right of Attila the Hun.”

Any more for any more? “I never saw him read a book, and other than The Art of the Deal, I suspect he’s never read a book in his adult life,” Schwartz said. “As for comprehension for what he does read, I’d say it’s early high school level. To judge his writing level, read his tweets, particularly the angrier ones, which is most, and which he writes himself. His way of communicating is very primitive.”