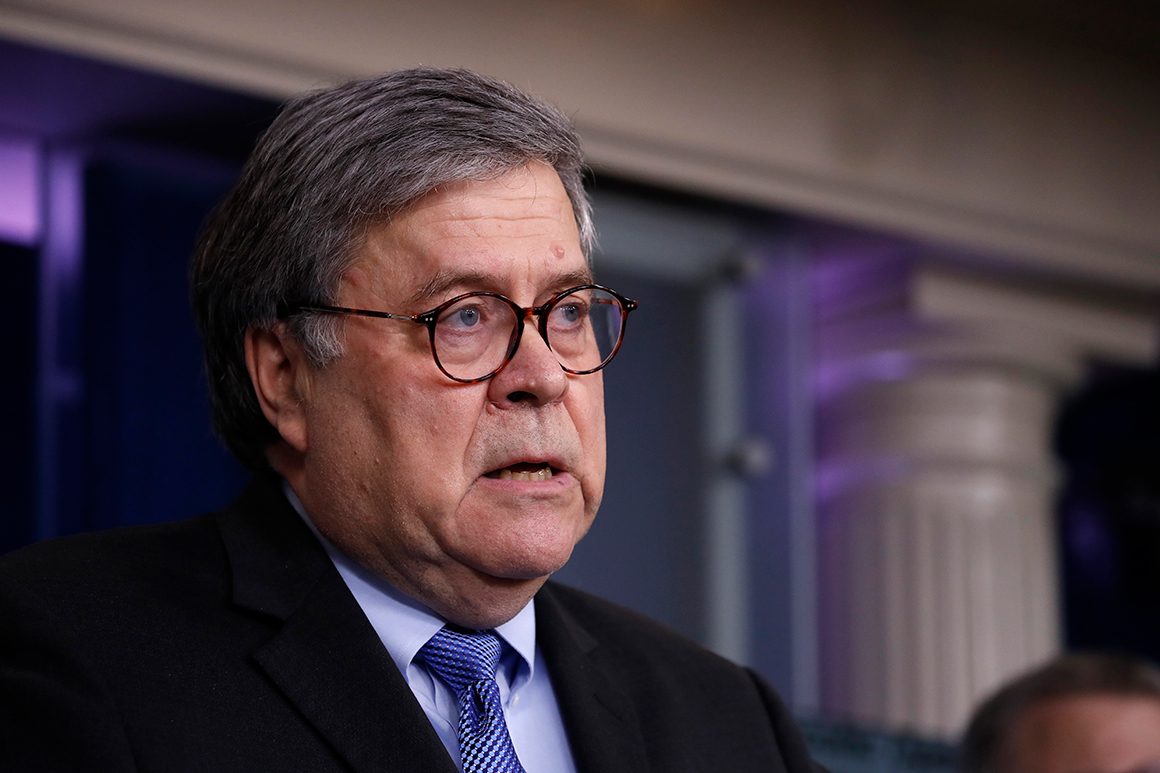 “As long as I’m attorney general, the criminal justice system will not be used for partisan political ends,” he continued, “and this is especially true for the upcoming elections in November.”

Barr’s remarks come amid an escalating campaign by the White House, Republican lawmakers and the president’s allies in conservative media tying various senior officials within the Obama administration to alleged acts of impropriety in the FBI’s case against Michael Flynn, Trump’s former national security adviser.

Trump has repeatedly asserted, without evidence, that former President Barack Obama and former Vice President Joe Biden — his presumptive Democratic opponent in the 2020 general election opponent — were behind the purported scheme to punish Flynn and wound his administration.

Barr — who last year appointed John Durham, the U.S. attorney for Connecticut, to probe the origins of the investigation into Russian interference in the 2016 election and potential coordination between the Russian government and the Trump campaign — also revealed it was unlikely that Obama or Biden would be investigated by the DOJ.

“Whatever their level of involvement, based on the information I have today, I don’t expect Mr. Durham’s work will lead to a criminal investigation of either man. Our concern over potential criminality is focused on others,” Barr said.

However, Barr did not completely reject the White House and Trump campaign’s current “Obamagate” obsession; he simply cautioned that those expecting prosecutions of high-level political figures are likely to be disappointed. “Not every abuse of power, no matter how outrageous, is necessarily a federal crime,” he said.

The attorney general was also careful to couple his effort to dampen expectations for the Durham probe with an emphatic expression of sympathy for the president’s frequent public grievances regarding the Russia scandal, arguing that Trump’s treatment in the 2016 election and during the first two years of his administration was “abhorrent,” a “grave injustice” and “unprecedented in American history.”

“We saw two different standards of justice emerge: One that applied to President Trump and his associates, and the other that applied to everybody else,” Barr said. “We can’t allow this ever to happen again.”

While Barr asserted he is moving aggressively to purge any political considerations from prosecutorial decisions, he has been accused of doing the president’s political bidding through recent interventions to lower the government’s sentencing recommendation for longtime Trump adviser Roger Stone and to abandon altogether the prosecution of Flynn, despite the guilty plea he offered to a false statement charge in 2017.

Both moves led to revolts by career government prosecutors assigned to those cases. About 2,000 former Justice Department lawyers and other officials signed a letter last week urging Barr to resign over his actions in the Stone and Flynn cases.

In his remarks Monday, Barr faulted “the law enforcement and the intelligence apparatus of this county” for becoming involved in promoting “false and utterly baseless” claims that Trump colluded with Russia during the 2016 election.

Wray stood by silently during Barr’s comments. The FBI chief has contended he moved quickly to institute reforms after learning of problems with the bureau’s surveillance programs. He has also said that most of the senior FBI leaders involved in the Russia probe have either left the agency or were fired.