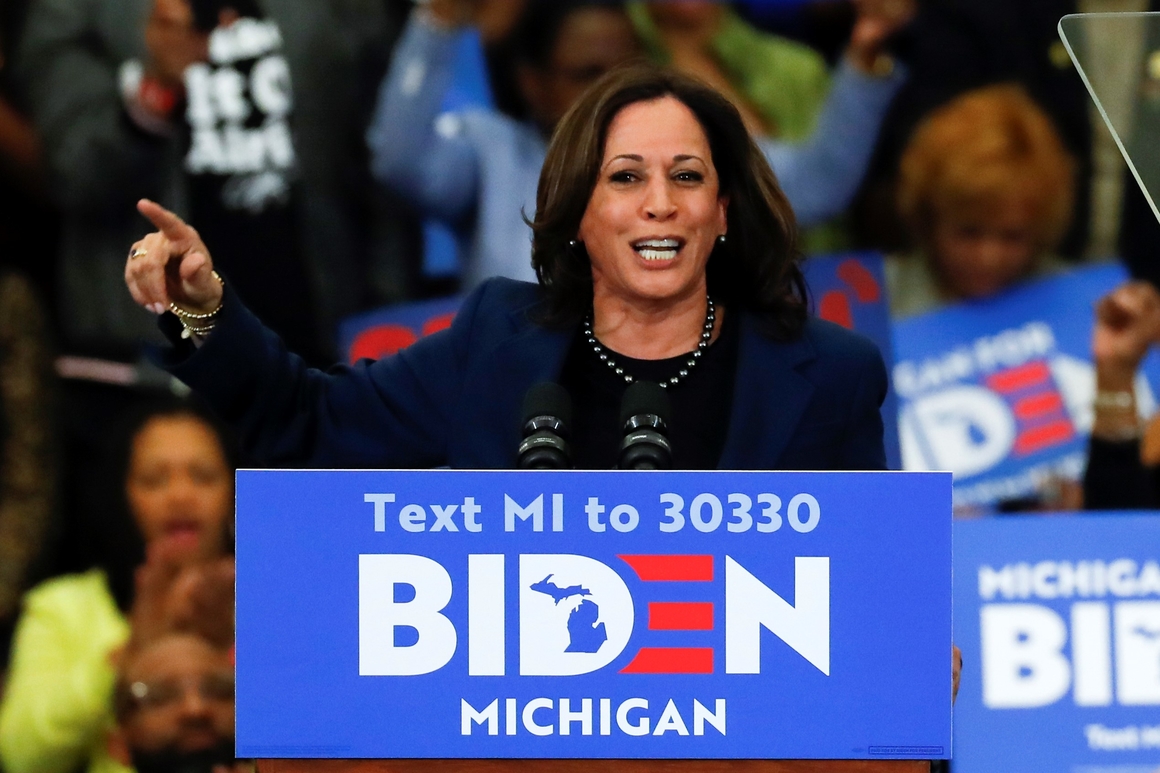 Ruy Teixeira, a senior fellow at the Center for American Progress who has written extensively about election demographics, said in the short term Biden may have “settled” the question between those who wanted the party to focus a little more on white voters and a moderate messenger or be more progressive and nonwhite.

Still, Biden manages to blur the debate lines because he won such strong black support, was the heir to Obama’s legacy and, Teixeira said, is now “running on a pretty friggin’ left program when you compare it to Hillary and compare it to Obama and go back a few cycles.”

Teixeira said it’s possible Biden could go in an even more progressive direction by picking Sen. Elizabeth Warren, the primary rival who endorsed him last week. But he said it’s more likely that race and region would be bigger factors in Biden’s selection.

“If I had to make a guess, it would either be the Kamala route or the Klobuchar-Whitmer route. It’s pretty much a toss-up in my mind. It does reflect that debate,” Teixeira said, adding that the “center of gravity” leans more toward a black running mate like Harris, Abrams or Florida Rep. Val Demings.

At 77, amid speculation he would seek to serve only one term in the White House, Biden understands the critical role he is poised to play in shaping the party’s identity for years to come.

“I view myself as a bridge, not as anything else,” he said at a Detroit event in early March that featured Harris, among others. “There’s an entire generation of leaders you saw stand behind me. They are the future of this country.”

While he hasn’t tipped his hand on which direction he is leaning, Biden has already had public auditions of sorts, for some of the women on his shortlist. Whitmer was the first guest on his new podcast “Here’s the Deal.” And earlier this month, Harris made a surprise appearance at one of his virtual fundraisers, where she introduced him.

An adviser to Biden noted that he thought highly of three of his former opponents. He appreciated Klobuchar’s hard work to help him win Minnesota, Warren’s attention to detail and policy, and Harris’ dynamic personality and her friendship with his son, Beau, who had passed away in 2015.

“Anyone who is telling you about who’s leading in the so-called ‘veepstakes’ is full of shit and doesn’t know anything,” the adviser said.

No one rises to the top alone. Sign up for the Women Rule newsletter and #RuleWithUs.

Neil Sroka, an activist with the progressive Democracy for America group and a city councilman in the Michigan city of Grosse Pointe Farms, said one factor Biden shouldn’t overlook in his calculation is the importance of the progressive base.

“It would be a mistake for him to just focus on how you assemble the Obama coalition. It should be about where the party goes in the future,” Sroka said. “He’s acknowledged he’s not the future of the party. It’s precarious if he picks the wrong future, and that’s going to be a real challenge.”

Michigan’s Democratic Party chair, Lavora Barnes, said she’s conflicted over the choice. Whitmer would be on “everyone’s shortlist for vice president because she is so terrific,” she says, but Barnes doesn’t want Whitmer to leave as Democrats build strength in the state and the governor faces off with Trump over fighting the coronavirus pandemic.

Barnes said Biden, who played a big role in the Obama administration’s auto-industry bailout, is so well-known in the state that he’s a “son of Michigan.” As a black woman, she said, she prefers a woman of color on his ticket.

“Having a woman of color would tip the scales,” she said. “If you look at the way this country voted for Joe Biden, he doesn’t have a race issue or a turnout issue. But I do think he can round out his candidacy and make the ticket stronger.”