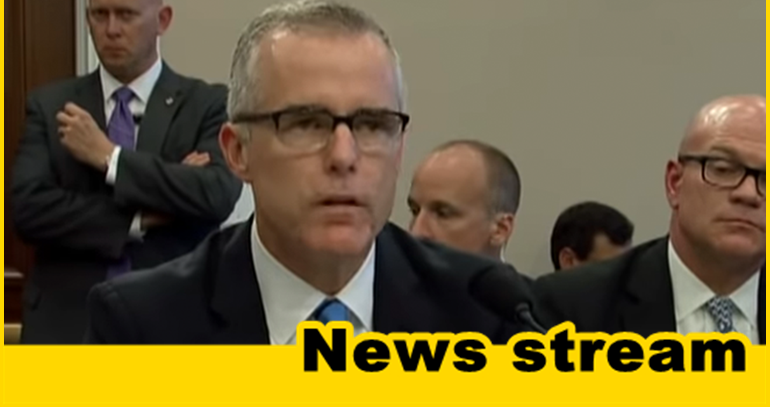 Bloomberg reports the Justice Department on Thursday notified lawyers for former FBI Deputy Director Andrew McCabe that they have rejected his appeal to avoid being criminally charged, according to a person close to his legal team. The move likely clears the way for him to be indicted for lying to federal agents.

The developments come about a month after McCabe sued the Justice Department and U.S. Attorney General William Barr, claiming his firing was unlawful. McCabe was ousted by then-Attorney General Jeff Sessions last year after an internal investigation into his role in disclosing a Clinton Foundation probe to the media.

The U.S. attorney’s office for the District of Columbia informed McCabe’s legal team last month that charges against McCabe were being recommended, according to a person familiar with the matter.

McCabe and his legal team met with Deputy Attorney General Jeffrey Rosen and the U.S. attorney, Jessie Liu, on Aug. 21 to appeal the recommendation, according to the person.

FBI caught 14 FBI agents/officials leaking sensitive, classified or grand jury info. If it happens, Andrew McCabe would be the only prosecution. “SES employee released FBI Sensitive info to a reporter and lacked candor not under oath and under oath when questioned about it.” https://t.co/CfuNjhy8Pj

Per NRO, Federal prosecutors in Washington have recommended that criminal charges be filed against Andrew McCabe, the FBI’s former deputy director, and the Justice Department   rejected a last-ditch appeal by McCabe’s lawyers, according to a report on Thursday by Fox News. This clears the way for what appears to be McCabe’s imminent indictment.

Jesse Liu, the U.S. attorney for the District of Columbia (appointed by Trump), has reportedly decided that McCabe should be charged. The decision was based on a referral by the Justice Department’s inspector general (appointed by Obama), Michael Horowitz. In a comprehensive report last year, issued after a probe of a leak of investigative information to the media orchestrated by McCabe, Horowitz found that McCabe had misled investigators, including making false statements under oath. As we observed here when the IG’s report was released, the case laid out by Horowitz appears compelling.

The Fox report indicates that Liu signaled to McCabe’s lawyers that she was persuaded to file charges. McCabe’s lawyers then appealed that decision to Jeffrey Rosen, the deputy attorney general (DAG). At least one source told Fox that McCabe’s team received an email from the Justice Department, which states: “The Department rejected your appeal of the United States Attorney’s Office’s decision in this matter. Any further inquiries should be directed to the United States Attorney’s Office.”