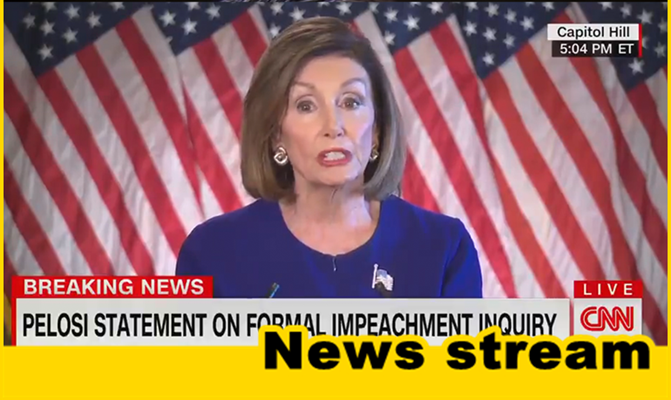 For the first time, Nancy Pelosi has come out in favor of impeaching President Trump.

Nancy Pelosi: “Today, I’m announcing the House of Representatives is moving forward with an official impeachment inquiry. I’m directing our six committees to proceed with their investigations under that umbrella … The president must be held accountable.”

Nancy Pelosi: "Today, I'm announcing the House of Representatives is moving forward with an official impeachment inquiry. I'm directing our six committees to proceed with their investigations under that umbrella … The president must be held accountable."

DailyCaller reports Speaker of the House Nancy Pelosi came out in favor of the impeachment of President Donald Trump for the first time Tuesday, after meeting with her caucus.

“What would be an impeachable offense would be that that is proven in an investigation. And we have to have an investigation,” Pelosi said at the Atlantic Festival before her 5 pm announcement.

“It would be my intention with the consent of this Caucus…. to proceed with an impeachment inquiry,” Pelosi said in the room prior to her announcement.

Many of Pelosi’s Democratic colleagues have continued to push for impeaching Trump, such as Democratic Texas Rep. Al Green, who broke with Pelosi when he vowed to force a vote to impeach Trump in late March. Green, who previously had several bills to impeach Trump overwhelmingly rejected by the House of Representatives, called for a third impeachment vote. Pelosi said impeachment was “just not worth it” in a March interview.

House Judiciary Chairman Jerry Nadler also requested a number of documents from the White House on March 4 and sent letters seeking information from people and organizations close to Trump.

Speaker Nancy Pelosi told Democrats behind closed doors that she is ready for the House to open a formal impeachment inquiry into President Donald Trump for pressuring Ukraine to investigate Joe Biden and his family.

“It would be my intention with the consent of this caucus … to proceed with an impeachment inquiry,” she said, according to two Democratic sources in the room. “He is asking a foreign government to help him in his campaign, that is a betrayal of his oath of office.”

Pelosi’s move comes after months of Democratic infighting over whether to support efforts to remove Trump from office.