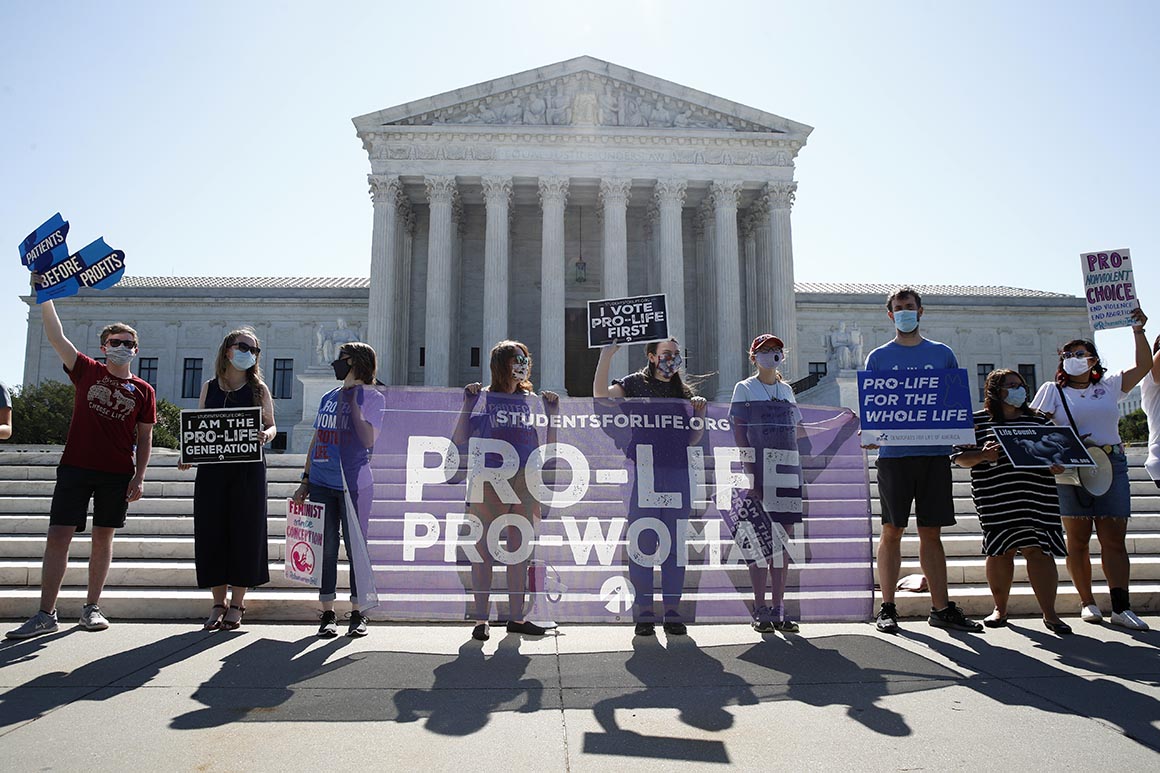 Religious and anti-abortion groups that helped sweep Donald Trump into office in 2016 say the narrow Supreme Court ruling striking down a Louisiana abortion law only adds fuel to ongoing efforts to reelect the president this November.

The conservative groups conceded that, in the short term, Monday’s 5-4 decision — which invalidated a law that critics said could have forced all but one of the state’s abortion providers to close — was a major loss for them and the administration. But they contended that it would give them a potent rallying cry to turn out the vote for Trump.

The message for voters will be twofold: The Trump-appointed justices showed they would side with anti-abortion activists, and now they need just one more ally.

“This ruling adds a new level of fervor and enthusiasm for the election,” said Mallory Quigley, spokesperson for the Susan B. Anthony List, an anti-abortion advocacy group. “We always knew we needed a bigger margin on the court, and whoever wins this election will likely have the opportunity to appoint additional justices. Making sure it’s President Trump and not Joe Biden is essential.”

The Trump administration on Monday showed it would promote that message, as well. Vice President Mike Pence tweeted, “After today’s disappointing decision by SCOTUS, one thing is clear: We need more Conservative justices on the U.S. Supreme Court.”

The ruling “lays bare how essential the presidency is with judicial appointments,” one senior administration official said. “For many conservatives, they’ll say, ‘This is why we have two Trump justices, and they got it right as a matter of law.’”

Of course, the ruling is unlikely to energize just conservatives. Progressives and Democratic lawmakers insisted Monday that the decision would motivate their base as well, maintaining that the narrow ruling — aided by the vote of the conservative-leaning Chief Justice John Roberts — showed just how precarious abortion rights were under a Trump presidency.

While Republicans have historically been more successful about making control of the Supreme Court an election issue, progressive activists have latched on to the issue since Trump entered office. In several competitive Senate races, for instance, abortion rights groups have pledged to defeat Republican incumbents over their votes to confirm Trump’s two Supreme Court picks, Justices Neil Gorsuch and Brett Kavanaugh.

Within hours of Monday’s ruling, the abortion rights group NARAL released an ad calling for the ouster of Sen. Susan Collins (R-Maine) over her vote for Kavanaugh. The video features Collins defending her vote by arguing that Kavanaugh promised her he would respect court precedent on abortion — a promise that critics say was broken by his vote on Monday to overturn the Supreme Court’s precedent in Whole Woman’s Health v. Hellerstedt.

“Given that Justice Kavanaugh did exactly what we anticipated he would do, we need to make sure we’re electing real choice champions who are willing to take hard votes, particularly around justices,” said Alexis McGill Johnson, president of the Planned Parenthood Action Fund, which advocates for legalized abortion and reproductive rights.

Collins responded with a statement saying that Kavanaugh “gave no indication in his dissenting opinion that he supports overturning Roe.”

Electing Trump to nominate conservatives to the Supreme Court has long been a political rallying cry on the right.

But in recent weeks, conservatives have faced a string of losses at the high court, calling into question the success of the strategy to this point. In addition to Monday’s ruling, the Supreme Court also recently upheld workplace discrimination protections for gay and transgender people and blocked the president from ending a program that shields immigrants from deportation who’d been brought to the country illegally as children.

“So far we’re not doing so well,” Trump acknowledged in an interview with the Christian Broadcast Network last week. “It says, look, we’ve had a lot of losses with a court that was supposed to be in our favor.”

The latest Supreme Court term has been “devastating” for religious conservatives, said Sen. Josh Hawley (R-Mo.), a former Roberts clerk who recently questioned the vetting process for Supreme Court nominees. “This goes back to my question about what we’re doing to see that we actually get pro-Constitution judges,” he said in an interview on Monday.

Other conservatives feared that Monday’s abortion ruling, coming on the heels of other losses, might demoralize people who voted for Trump specifically because of his promises on judges. They are developing messages specifically to counteract any potential defections.

“Conservatives should not lose heart: These decisions actually prove the importance of nominating and confirming good judges,” said Jessica Anderson, executive director of Heritage Action, the political advocacy arm of the D.C. think tank that’s investing heavily in mobilizing Republican voters. “Without the judges nominated by President Trump, today’s decision could have been 7-2 instead of 5-4.”

Since entering politics, Trump, who in 1999 said he was “very pro-choice,” has courted anti-abortion-rights voters, including many in the evangelical community. And as the president’s overall poll numbers have slid in recent weeks — amid national unrest over racial injustice, as well as a pandemic that has killed more than 125,000 Americans and put millions out of work — those voters are increasingly crucial to the president’s political survival.

Besides touting his court appointments, Trump has routinely reminded conservatives that he expanded the Mexico City policy, cutting foreign aid to groups that referred people for abortions. He has separately pointed to a new federal rule prohibiting federal family planning funds from going to Planned Parenthood and other abortion providers. Trump was also the first sitting president to address the anti-abortion March for Life.

A Gallup poll earlier this year found that dissatisfaction with abortion laws was at an all-time high. But people were split over whether they wanted more restrictions on abortion or more laws enabling access to legal abortion.

“We are now on the 5-yard line and this is not the time to quit — it’s time to redouble our efforts,” said Ralph Reed, a Trump surrogate and co-founder of the conservative Faith & Freedom Coalition. “If Donald Trump is reelected and gets one or two more appointments, we have a good chance of having a pro-life majority on the Supreme Court. If he is defeated and Biden becomes president, we lose that chance for a generation.”

But focusing on the closeness of the decision could cut both ways — potentially motivating progressive voters to see Monday’s ruling as narrowly dodging a bullet rather than securing a solid victory.

“It could have easily gone the other way,” Rep. Judy Chu (D-Cal.), leader of the House’s Pro-Choice Caucus, said in an interview. “There was only one vote in the balance, and he decided because of a technicality. If another one of these challenges gets up to the Supreme Court, who knows how Justice Roberts could vote?”

Other progressives emphasized that dozens of other abortion cases were working their way through a federal pipeline that now has 200 judges appointed by Trump. Any one of those cases could eventually reach the Supreme Court and allow the justices to revisit Roe v. Wade, the landmark case that ensured women access to legal abortion nearly 50 years ago.

As November draws closer, both sides of the heated debate are ramping up their electoral work.

SBA List, which has committed to spending at least $52 million to support anti-abortion candidates, has volunteers working phone banks in key swing states. Recently, as coronavirus pandemic lockdowns started lifting, the group returned to in-person canvassing in North Carolina, Arizona, Florida, Pennsylvania, Montana and Michigan — states that could decide control of the White House and Senate this fall.

Heritage Action is also pouring resources into swing states. Starting this week, it plans to knock on 200,000 doors in Wisconsin, North Carolina, Pennsylvania and Iowa. Soon, it will launch digital ads in Florida, Georgia, Arizona and South Carolina.

Planned Parenthood Action Fund recently endorsed Biden and several Democratic challengers in key Senate races and plans to spend at least $45 million to turn out voters this fall — triple what the group spent on federal elections in 2016.

As it was in 2018 when Democrats won back the House, control of the courts and implications for abortion rights will be front and center in the group’s message.

“We have an opportunity to really educate voters around what will be at stake in years to come,” said McGill Johnson, of the Planned Parenthood Action Fund. “We just saw the Trump administration confirm its 200th judge, and it was someone who would overturn Roe.”

Marianne LeVine and Andrew Desiderio contributed to this report.