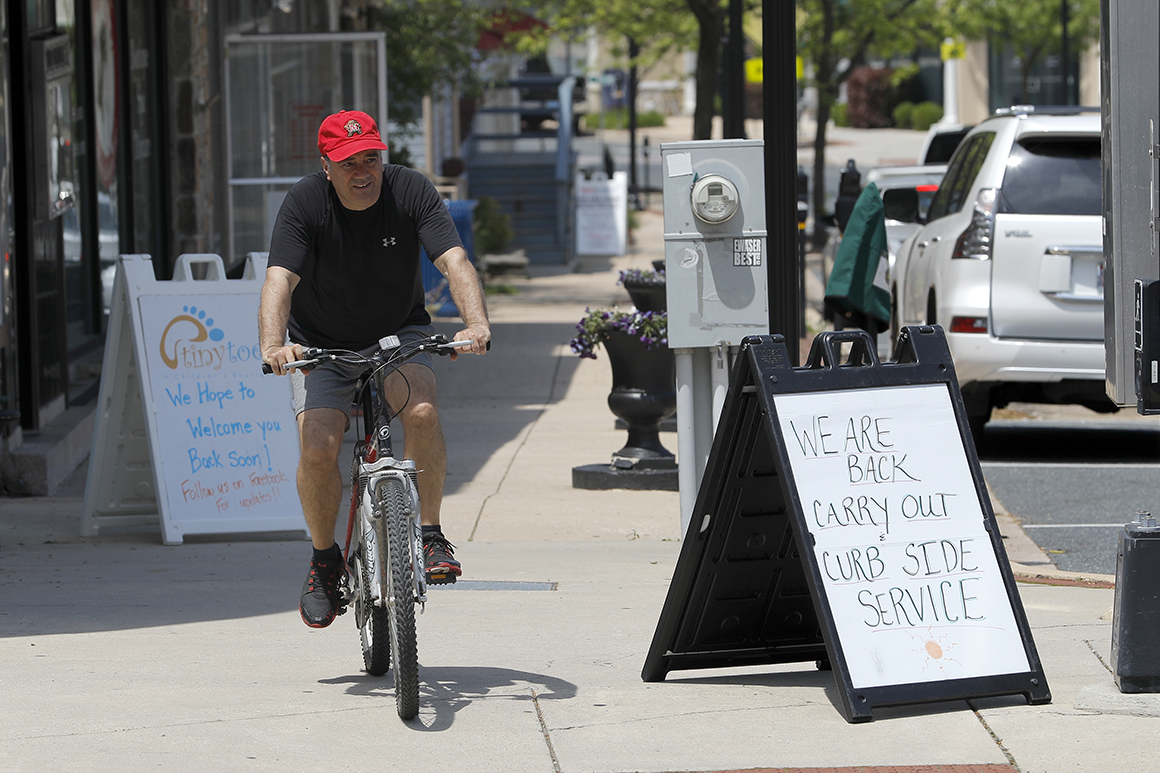 Maryland’s 30-page plan highlights so-called “Stop Signs” — or early indication warnings that some eased restrictions are triggering new outbreaks or significantly straining medical resources. The signs include an unexpected increase in hospitalizations or sustained increase in cases requiring intensive care; indications that residents are disregarding physical distancing guidelines; significant outbreaks of community transmission where contact tracing can’t establish the path of the spread; and a sustained increase in cases over at least five days.

“We closely monitor these factors and will adapt to any early warning indications to prevent an avoidable spread of the disease,” the guidance reads. “Obviously, if there is a major new outbreak or cluster, the state will take quick mitigation actions to protect the health and safety of Marylanders. In some instances, this could even mean rolling-back some of the reopening steps.” It does not say what restrictions might be reimposed.

Virginia’s document, on the other hand, doesn’t mention what would happen if it reopened and cases surged. Both Virginia and Maryland began lifting their stay-at-home orders last week.

In New York, home to almost a quarter of the country’s 1.5 million Covid-19 cases, the state government’s road map emphasizes monitoring the rate of transmission, which can be calculated based on new hospitalizations and coronavirus diagnoses. A “control room” of state and local officials and hospital officials is in charge of monitoring the regional infection rate “and can slow or shut off reopening if indicators are problematic.”

The upstate regions north of the Hudson Valley have been reopened since May 15, but several areas have seen hospitalizations inch upwards since that date. The statewide stay-at-home order is set to expire Thursday.

Both New York Gov. Andrew Cuomo and Gov. Phil Murphy in next-door New Jersey have indicated they’d be willing to shut down activity again if reopening leads to a spike in cases or hospitalizations. New Jersey’s public health emergency is set to expire June 5.

Massachusetts Gov. Charlie Baker, one of the last state leaders to loosen restrictions and reopen the economy, also made clear Monday that if public health data trends start moving in the wrong direction, industries, regions or even the entire commonwealth may need to put those restrictions back in place.

And Colorado, which began reopening days before Alabama, has issued specific guidance on workplace outbreaks, including recommendations for the temporary closure of any workplace or facility where at least two cases of Covid-19 are detected among employees within 14 days.

In a virtual briefing for reporters Wednesday with state health officials, Colorado Department of Public Health and Environment Executive Director Jill Hunsaker Ryan cautioned that if the state isn’t able to keep the virus suppressed, “we’ll have to return to stay at home.”

National guidance, however, is vague when it comes to how states should respond to any new surges of cases.

The White House guidelines for reopening America call on states to “Monitor conditions and immediately take steps to limit and mitigate any rebounds or outbreaks by restarting a phase or returning to an earlier phase, depending on severity.” But it doesn’t mention the return of stay-at-home orders, which public health experts credit for slowing the spread of the virus.

The National Governors Association’s health guide notes that states must be able “to recognize the threat of a resurgence of cases” and act “quickly to prevent significant harm, even if these steps involve a temporary slowing down of the economy.”

José Cordero, head of the University of Georgia College of Public Health’s epidemiology and biostatistics department, said state leaders should look outside the U.S. for guidance. Saudi Arabia, Turkey, India and Singapore have all reimposed or continued their lockdowns after the number of infections soared. South Korea, meanwhile, tracked down and tested 65,000 people following an outbreak in a Seoul nightclub district earlier this month. The 170 people who tested positive are in quarantine.

Cordero said areas where outbreaks occur should close down businesses and reinstitute orders to stay home. Robust testing and tracing is also essential, he said.

State officials in Alabama, however, appear to be ignoring that advice. Scott Harris, the state health officer, argued that even if Montgomery hospitals’ conventional ICU beds are full, hospitals have other spaces they can use.

“They have the ability within their four walls to handle that,” he said Thursday.