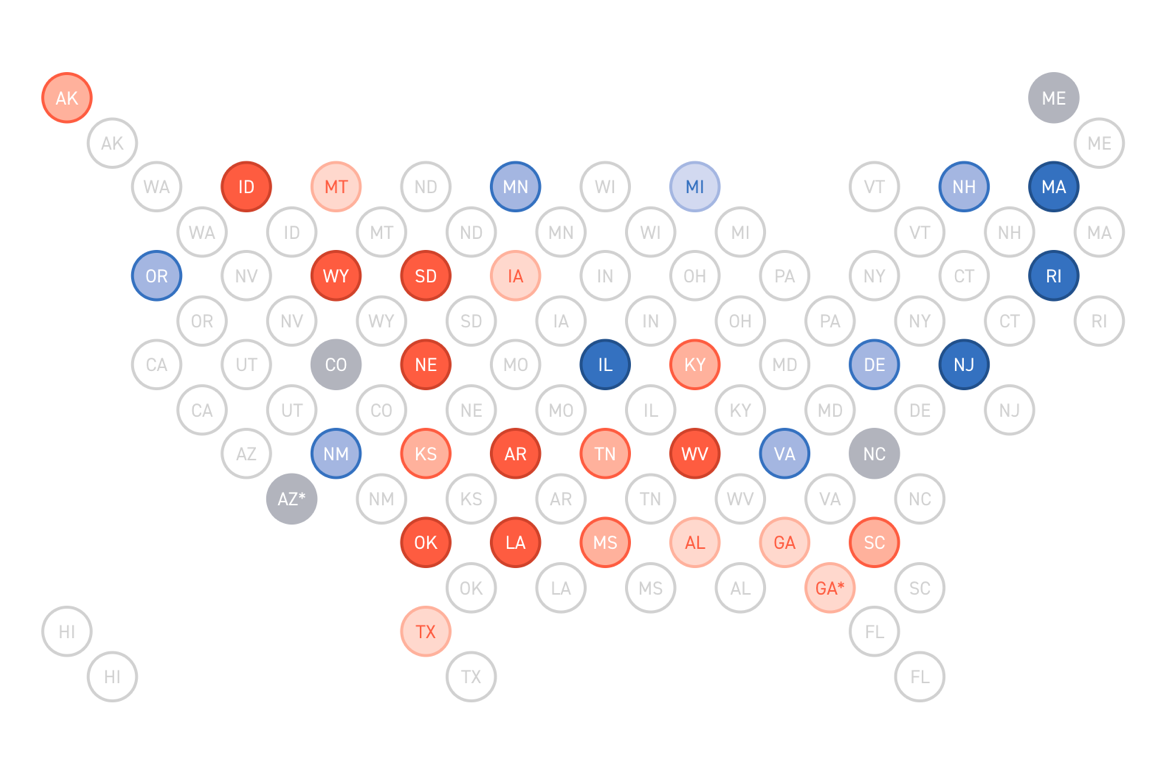 “When campaigning does ramp back up, these [Democratic] challengers will begin to receive the scrutiny and vetting their backgrounds and records deserve,” he said. “Most of them have never been through a competitive race, so it will be a rude awakening.”

Democrats have to defend at least two seats that could make their bid for the majority much tougher. In Alabama, Sen. Doug Jones won a special election in 2017 and faces a challenging if not impossible campaign in a state Trump won by 28 points in 2016. But Jones has a tenfold cash advantage over his GOP rivals, and the divisive primary between former Attorney General Jeff Sessions and former Auburn University football coach Tommy Tuberville, originally scheduled for March, is delayed until July.

Republicans’ second-best opportunity is in Michigan against Sen. Gary Peters, who won his first race despite a terrible 2014 environment, but faces a challenging election against Republican John James. James, who lost the state’s 2018 Senate race, has outraised Peters three quarters in a row — but Democrats have already spent $6 million in that race boosting Peters and attacking James.

Some races, like in Texas and Georgia, are tougher for Democrats still mired in primary campaigns while incumbents build massive fundraising advantages. But the special election in Georgia’s other seat has emerged as a problem for Republicans, as appointed Sen. Kelly Loeffler is facing scrutiny for stock trades made amid the coronavirus outbreak, including from GOP Rep. Doug Collins, who is challenging her in the all-party race.

Democrats have also expanded their opportunities in a handful of red states. Montana Gov. Steve Bullock’s Senate candidacy is forcing Republicans to spend to defend GOP Sen. Steve Daines, who likely would’ve coasted to reelection if Bullock had not run. And state Sen. Barbara Bollier, a physician and former Republican who switched parties in 2018, could be formidable in Kansas, where Republicans face a divisive and late primary without a clear frontrunner.

“Democrats have put more states in play and have more paths to the majority with strong candidates, impressive campaign operations and a focus on what matters most to voters: affordable quality health care, lowering the cost of prescription drugs and economic security for working families — not corporate special interests,” said Lauren Passalacqua, a spokesperson for the DSCC.

Republicans broadly acknowledge Democrats’ massive financial edge, with early outside money flowing into every single battleground at a clip that dwarfs GOP spending. In Arizona, Colorado, Iowa, Maine, North Carolina and Kentucky, the GOP has already been outspent by millions from Democratic campaigns and outside groups. Democratic challengers outraised Republican incumbents in nine races, though Republicans maintain a cash advantages in all but two of them.

“This could be a challenging political environment overall,” said Law, president of the GOP super PAC. “Right now, it’s unusually hard to predict. But the number of seats that we need to defend, versus the ones that they need to defend, makes it a taller order — and therefore takes a lot more resources to be able to be competitive.”