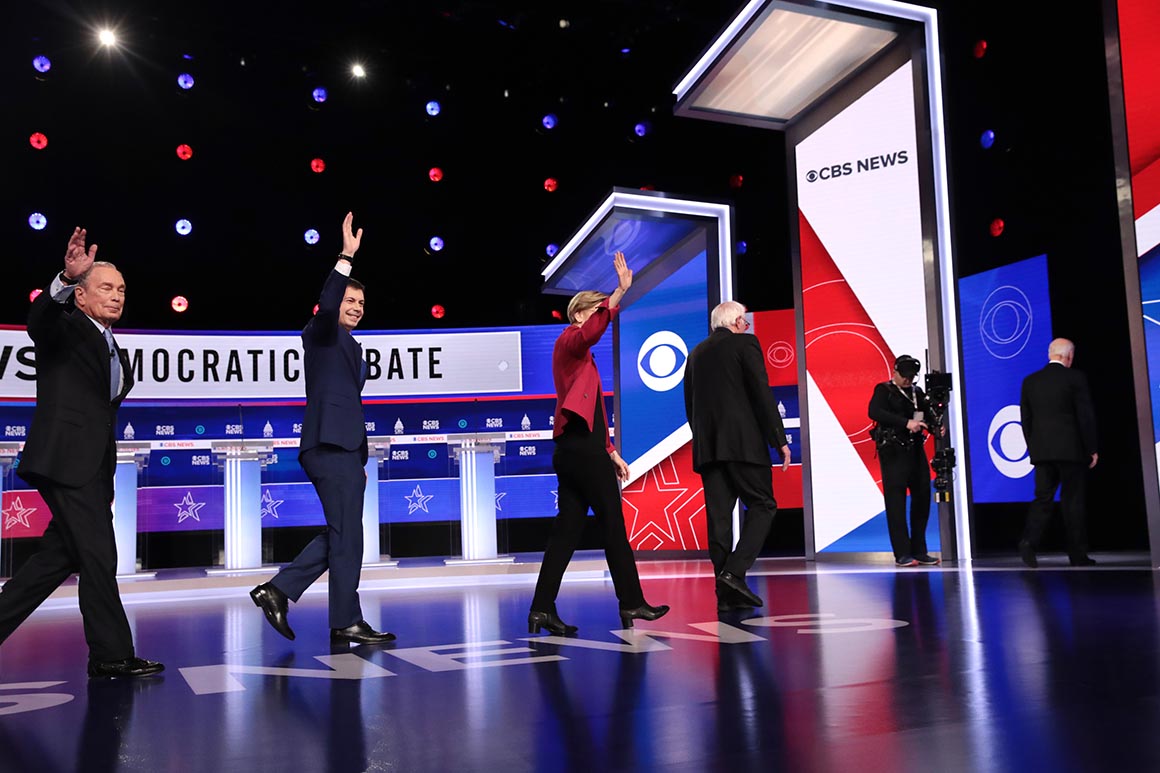 This comparatively coherent competition of philosophies, however, occurred well past the halfway point of the debate, aired by CBS News and co-hosted by Twitter.

The first half of the debate was a more blurred affair. All candidates were taking shots at Sanders, so at first blush one might suppose that six-against-one math worked against him. In fact, much of the time it worked for him, since his rivals were each making differently nuanced cases against him and several seemed more animated by taking on other people.

Elizabeth Warren, for instance, said she agrees with much of Sanders’ program and agrees with him that it is more popular than more centrist candidates claim. But she argued, “I would make a better president than Bernie.”

“And the reason for that,” she continued, “is that getting a progressive agenda enacted is going to be really hard, and it’s going to take someone who digs into the details to make it happen.”

This was far from the rhetorical hot oil that former New York Mayor Michael Bloomberg threw in Sanders’ face: “Vladimir Putin thinks that Donald Trump should be president of the United States. And that’s why Russia is helping you get elected, so you will lose to him.”

Biden, likewise, questioned Sanders’ loyalty to Barack Obama, whose legacy looms large among the heavily African-American electorate here. “He said we should primary Barack Obama,” during his 2012 re-election, “and [that] the president was weak and our administration was in fact not up to it.”

Biden also clashed with billionaire and liberal activist Tom Steyer, who returned to the stage after failing to qualify for a recent debate in Nevada. Some polls suggest that Steyer’s advertising is succeeding in winning him a significant share of South Carolina Democrats. If Biden does not win the state on Saturday and show convincingly that he can command the support of minority voters who are the Democrats’ most loyal constituency, his candidacy is functionally over. Weakness among these same constituencies is also leaving the candidacies of Warren, Buttigieg and Amy Klobuchar gasping for air.

Klobuchar has said she worked cooperatively with Sanders in the Senate but that he is too impractical and too radical in his spending to be a good presidential nominee. “The math does not add up,” said Klobuchar, who did not repeat the tense exchanges with Buttigieg that marked recent debates. “In fact, just on ‘60 Minutes’ this weekend, he said he wasn’t going to rattle through the nickels and the dimes. Well, let me tell you how many nickels and dimes we’re talking about: nearly $60 trillion.”

Unlike his first debate appearance a week ago, Bloomberg did not obviously lay a rotten egg this time. But with testy responses to Warren about his record on women, an awkward attempt at self-deprecating humor over his first debate performance, and no crisp or sustained argument, he demonstrated abundantly that this is not his natural setting. If he keeps momentum going in the race—he entered too late to be on the ballot in South Carolina—it will be on the strength of his self-financed advertising alone.

Of course, there was no evidence that this particular debate stage was any candidate’s natural setting. Nor was it a win for Democrats wondering about the party’s future. There were plenty of legitimate things to argue about, and for stretches this actually occurred. But for longer stretches it didn’t. This was mostly a wasted couple hours for a party and for candidates who don’t have time to waste.