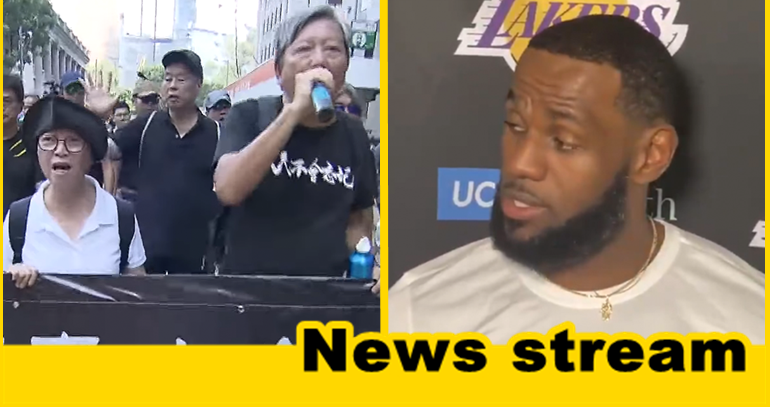 Basketball star Lebron James has upset many in Hong Kong by appearing to have sided squarely with China, making the argument that with freedom of speech comes many negatives and ramifications.

LeBron James rips Daryl Morey, says Morey was uneducated. Says, “We do have freedom of speech, but there can be a lot of negatives that come with that too.” Really. pic.twitter.com/ZTw6a3FZ5n

Per AFP, basketball superstar LeBron James was accused of turning a blind eye to Chinese repression on Tuesday after he criticized a Houston Rockets executive for angering China with a “misinformed” tweet supporting protesters in Hong Kong.

James told reporters that Rockets general manager Daryl Morey “wasn’t educated” on Hong Kong and should have kept his mouth shut, as the outspoken Lakers forward waded into a charged debate that other high-profile NBA figures have shied away from.

“So many people could have been harmed not only financially but physically, emotionally and spiritually. So just be careful with what we tweet, and we say, and we do,” James told reporters when asked for comment in Los Angeles after returning from the NBA’s annual China tour.

His remarks drew praise from Chinese social media users, who have savaged Morey for butting into the country’s affairs, but the US reaction on Twitter was swift and harsh.

Per the Hollywood reporter, the L.A. Lakers star tried to clarify his comments — “My team and this league just went through a difficult week” — but many in Hong Kong argued that any such unpleasantness was little compared to police brutality.

LeBron James, usually held up as a progressive icon, is getting slammed for the comments he made Monday night criticizing Houston Rockets general manager Daryl Morey for his recent tweet in support of Hong Kong’s pro-democracy movement.

“I believe he wasn’t educated on the situation at hand, and he spoke,” James said of Morey. “So many people could have been harmed, not only financially, but physically, emotionally, spiritually.”

The remarks from James, arguably the world’s most influential basketball player, sparked a wave of backlash on social media both stateside and internationally, with U.S. politicians, Hong Kong protestors and other observers questioning whether the Lakers star was just the latest sports and entertainment industry leader to put business interests in China ahead of democratic values.

The online platform LIHKG, the forum favored by Hong Kong’s protestors, was awash with criticism and handwringing Tuesday. “Has he been brainwashed by the Chinese Communist Party’s fake news or has he been bought?” wrote one user.