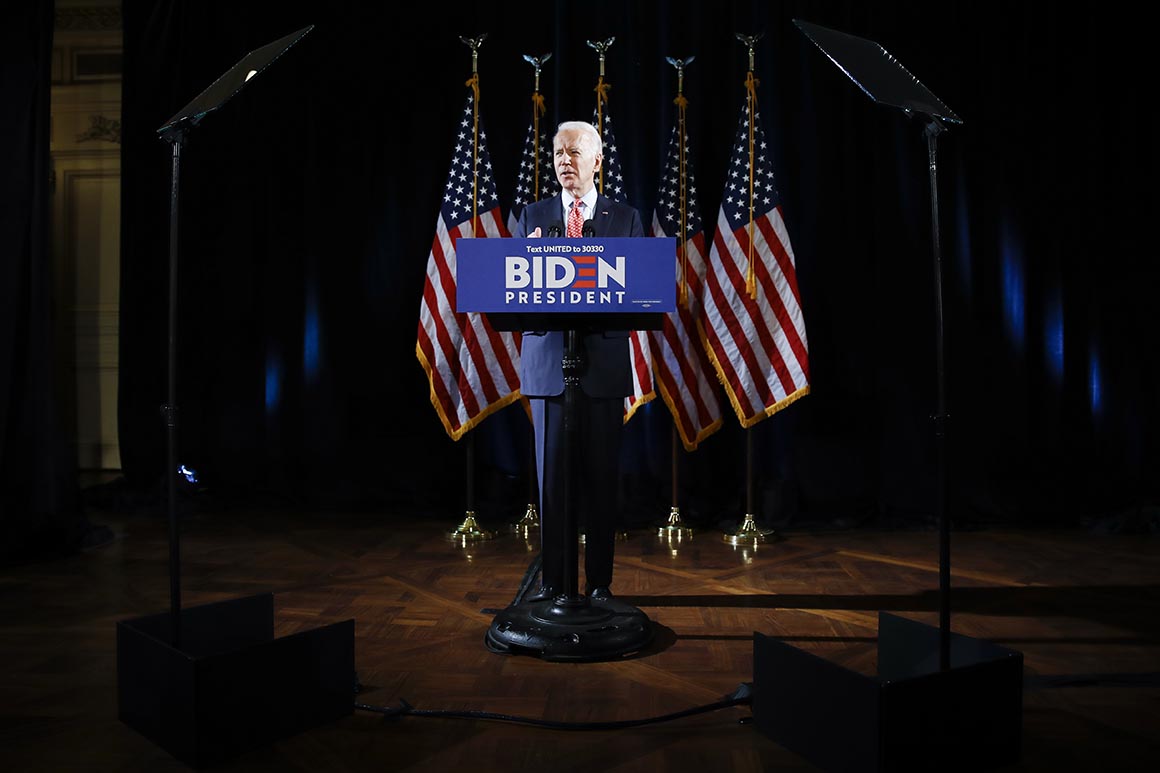 With some kind of social distancing policy possibly in place for months, and no vaccine on the horizon till next year at the earliest, campaign insiders are already asking questions that don’t appear to have any good answers. How do you hold a safe convention, or create a new kind of “virtual” event that accomplishes anything a convention is supposed to do? How do you try to unify a party without being able to bring any of its factions together for face-to-face negotiating? What kind of a campaign can you even run if the key element of a campaign—regular, in-person visits to battleground states—is off the table? How do you mount a “get out the vote” campaign if door-to-door canvassing and sign-up efforts at mass rallies are out of the question?

To get a sense of what we may be seeing in the weeks and months ahead, I asked veterans of past campaigns, both Republicans and Democrats, how they might grapple with these dilemmas. Here’s what they foresee, and what they worry about.

At the center of the nominating process for more than a century and a half has been the political convention. Its role has evolved, and a convention hasn’t actually chosen the nominee for half a century, but it has always meant one thing: a massive gathering of thousands of party foot soldiers. Today, a convention is a made-for-TV showcase for the party’s message, and an intense, festive, highly social midsummer energy boost for the most motivated members of the party.

As of now, the Democrats have officially only postponed their Wisconsin convention for a month, but presumptive nominee Joe Biden has already said that a “virtual convention” is a real possibility if not a probability. President Trump is still promising a traditional event. But with a pandemic virus still likely to be slicing through the population in the summer, the person-to-person jostling of a crowded convention looks more and more like a health disaster waiting to happen.

Technically speaking, of course, conventions don’t have to take place in person at all. “Almost everything you do at a convention you can do virtually,” says Elaine Kamarck, who has been a member of the Democrats’ rules committee for a generation. She’d just finished voting for convention delegates from Massachusetts, her one state, where the party used a Zoom teleconference to let candidates make their pitches. Committee members were given ID numbers to vote electronically.

Those same tools, Kamarck said, could be used to handle all the backroom business of a convention—conduct arguments and votes over rules, credentials, and platform disputes. (And for the Democrats, there may be less at stake this cycle: With Bernie Sanders leaving the race, it’s likely that platform disputes will be less rancorous than in 2016, even though Sanders wants the platform titled or pushed or pulled to the left.)

But that still leaves the central issue about modern conventions unresolved: How will a party present itself to the nation, and—critically—what will the TV networks, particularly the broadcast networks, agree to carry?

“Conventions may be an anachronism,” says former Obama campaign manager David Axelrod, “but they do provide four nights of network coverage and a guaranteed national audience, the impact of which is magnified by the enthusiasm of a crowd.”

The impact of a well-crafted convention, hammering home key arguments, can leave voters with a positive impression of a party, and can make a difference even before the main event of a nominee’s acceptance speech. (Think Bill Clinton making the case for Obama’s re-election in 2012.) As for the acceptance speech, they have made a real difference to charismatically challenged nominees like George H.W. Bush in 1988 and Al Gore in 2000. It’s exactly the kind of setting Joe Biden needs… and one that a virtual convention would not provide. So what to do?

Based on the optics alone, the worst idea would be to stage some “safe” version of a gathering, like having a few hundred party insiders space themselves six feet apart in an arena. As anyone who’s ever worked advance will tell you, there’s nothing more deflating than an event staged in a mostly empty hall.

Longtime Republican operatives Mike Murphy suggests that campaigns forget the old model and try something radically new. “I’d call Hollywood and say, ‘We need a great 90 minute movie … and start thinking about this now,’ ” he said. “Hollywood people know how to do this better than political hacks.”

Robert Shrum, who helped shape Democratic campaigns from Ed Kennedy to Al Gore, has a different notion: “If I was with the Biden campaign I’d work long and hard at shaping an acceptance speech that’s more of a ‘fireside chat.’ I’d forget about shaping sound bites and go for a narrative and a logical consistency. You have to deliver them in a conversational way. And I think Biden can pull this off. One of the things that people think is a weakness is a strength. He’s reassuring, not a revolutionary.”

Whatever the campaign might come up with—Hollywood dazzle or calm reassurance—one key question is what the broadcast networks will cover. Over the years, they’ve featured less and less convention coverage, jointly broadcasting only the last night of the convention, with the nominee’s speech. Will they agree to run, say, a two-hour film instead? A pre-recorded speech? (In the past, broadcast networks have had different rules about telecasting a film produced by a campaign; some have been willing to see it as in integral party of the acceptance speech; others reject it as an attempt to run a free ad.)

And what if the two parties take radically different approaches? Donald Trump lives for mass rallies, where he struts for an hour or two on the stage. Even if the mayor of Charlotte and the governor of North Carolina impose a lockdown on the planned convention city if the virus has not abated by August, it’s conceivable that Trump will simply decamp to a friendlier red state—Florida, Georgia—and hold a rally there.

Up until now, networks have been very careful to provide the exact same amount of coverage to both parties. But that has also depended on conventions being more or less parallel events. With any new approach, and especially if the parties take sharply different directions, what they decide to carry, and not carry, could be a critical issue come August.

“If you’re trying to do politics without crowds, with news media trained to look at crowds, you’re taking the apple out of apple pie,” Murphy says. “The mass rally is done, and geography is done, because the new geography is the Internet. So the question is, how do you come up with original and inventive approaches?”

Joe Trippi, who has been a key Democratic campaign strategist for some 40 years, was part of a campaign that did just that, when Howard Dean’s 20044 dark-horse campaign turned to the Internet to build a massive fundraising machine.

“In ’04 we did the Internet because we had to,” Trippi says. We had to create a whole different way of doing it. The necessity is there again”—but this time, it’s a necessity that goes to the heart of campaign tools.

For instance, mass rallies aren’t just held for the spectacle; they’re places where phone and e-mail contacts are gathered, fueling parties’ fundraising and their get-out-the-vote operations. Visits to key states are where contributors are invited to meet with the candidate, and where local news can be counted on to provide extensive, mostly favorable coverage.

So what communications tools could work in a world where these traditional elements are sidelined? One might be a form almost considered obsolete: television ads.

“Advertising usually is far less important in presidential campaigns, because it’s overwhelmed by free media,” says Shrum, who helped pilot the campaigns of Ted Kennedy, Gore, and John Kerry. “But in these circumstances, it becomes a critical voice for delivering message. It’s the ‘front porch’ campaign with modern technology.”

Murphy points to a specific kind of advertising that helped a campaign case the gap with a front runner.

“Remember the Gerald Ford-Joe Garagiola TV conversations?” he asks. He’s talking about the 1976 campaign where President Ford, far behind in the polls, participated in a series of informal interview-conversations with former baseball player and prominent TV personality Joe Garagiola. The low-pressure format was perfectly suited to the genial, less-than-charismatic Ford, and it was one of the reasons why what looked like a landslide for Jimmy Carter turned into a close election.

For Biden, a similar format with a prominent TV personality—Oprah, perhaps?— might work the same way.

As for Trump, while he may crave the mass rally and Fidel Castro-length speeches, he has shown that, with the right packaging, he can come off as a formidable TV personality. As much as anything else, his years hosting “the Apprentice” proves that.

Trump clearly sees a similar possibility with the nightly coronavirus briefing, which he “hosts” personally, every day, instead of logically turning it over to experts. With his attacks on Democrats, the World Health Organization, governors and Obama, the president has already been turning these highly rated events into a powerful political pulpit—although his decline in recent polls suggest he may also be misreading this moment.

While it may be nearly 200 days until the election, the Wisconsin primary has already thrown the key challenge for Democrats into bold relief. If the threat of the coronavirus is still present in November—or if it has returned—than alternatives to in-person voting become the key to the election.

Republicans, including the president, have been relentlessly and brutally candid about their intentions; the easier it is for Americans to vote, the better the chances for Biden. What this means is that Democrats have to begin now to “get out the vote” in terms of helping voters register for absentee mail in ballots. If states make that harder—say, by returning scanned copies of drivers’ licenses or other valid IDs—then Democrats may have to do all kinds of unusual new things, like providing scanners in low-income neighborhoods, where these tools are less available.

This means says Joe Trippi, that “you have got design a completely different get-out-the-vote operation … you have got to have legal teams looking it, starting now.”

In one sense, the political world this fall will be paralleling the wider world, in grappling with accelerated changes in our lives that were already underway: just as telecommuting, virtual conferences, and online shopping are trends that have exponentially increased, so politics may be about to see the same unplanned plunge into the future. We can only imagine the more revolutionary possibilities. (Will candidates appear via hologram? Be careful before dismissing the notion.)

What the coronavirus has done is to turn the evolution of campaign strategy and tactics into a new reality, right now. If the heart and soul of election behavior has been rendered unsafe, then, in Murphy’s words, “the election is like Sears Roebuck waking up to online shopping.”

Sears Roebuck went bankrupt two years ago. In a political sense, that fate may well await a campaign that cannot meet the demands of a moment that nobody could have possibly anticipated.

CORRECTION: An earlier version of this article misstated when Howard Dean ran for president.