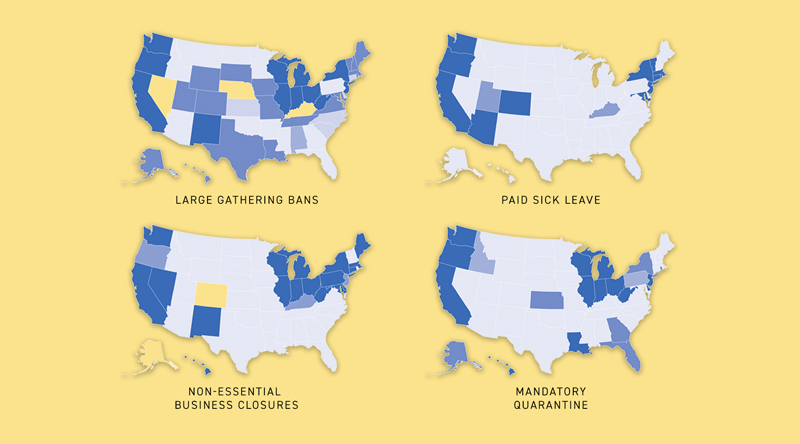 California, Illinois, Indiana, Michigan, Ohio, Washington, West Virginia and Wisconsin have initiated the most comprehensive policies. They’ve closed all bars and restaurants except for takeout and delivery, banned all gatherings, ordered mandatory statewide quarantine, closed all nonessential businesses, and closed all schools. California and Washington have also enacted paid sick leave for workers.

Mississippi and Oklahoma are on the other end of the spectrum. Neither has instituted social restrictions outside closing schools.

Many states have limited the operations of dining establishments to prevent the spread of the disease among crowds, requiring bars and restaurants to either shift to takeout-only operations or close down entirely.

Though the development of a coronavirus vaccine is likely more than a year away, many states have already enacted policies dictating that the vaccine be provided to all residents for free. Lawmakers pushing for this argue the high cost of vaccinating the population for free pales in comparison to the cost of failing to do so and having the virus resurge in the future.

Many states have banned large gatherings to slow the spread of the virus, but there is wide variation on what constitutes a “large gathering.” As the crisis has worsened over the past few weeks, states have brought down the size of allowed gatherings from 1,000 to 250 to 50 to just 10.

States hardest hit by the virus have implemented broad mandatory quarantine orders, also referred to as “shelter in place” or “stay at home” policies. Though the policies vary between states, residents are generally instructed to stay at home unless going out for essential activities, such as grocery shopping.

Many states have ordered all business deemed nonessential to temporarily close, while those like grocery stores, pharmacies and hospitals that must continue operating need to implement strict safety guidelines for workers. States have differed on whether abortion clinics and gun stores, among other businesses, should be deemed essential.

A handful of mainly progressive states have enacted laws expanding paid sick leave for workers who contract coronavirus or who must care for a loved one who becomes infected. Before the outbreak, many workers had little or no guaranteed paid leave, including millions of people in the gig economy.

Nearly every state in the nation has closed its schools out of fear that large groups of children would become petri dishes for the virus. The move has, however, created other problems, as many low-income children depend on free school meals and many parents who have to continue going to work or work from home now have to care for their children.