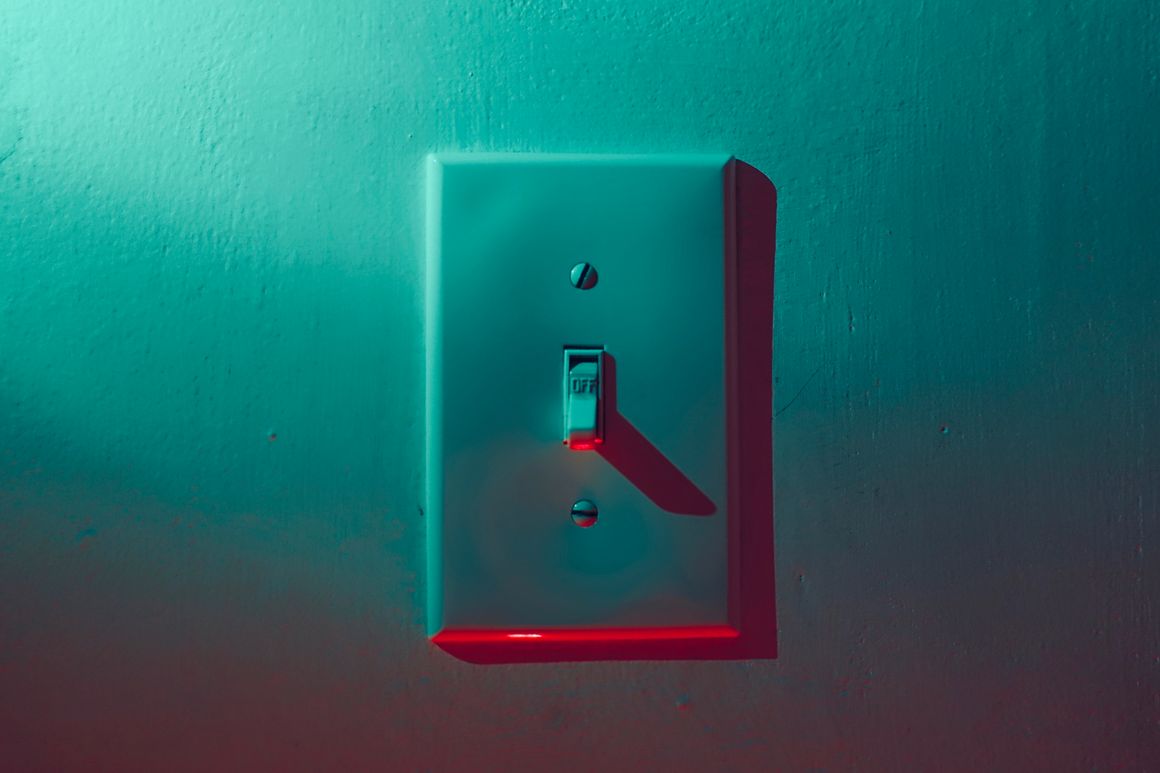 An off switch implies a decision you can undo: You flick the switch back on and companies rehire furloughed workers and reopen their doors for business; consumers open their wallets again. But for much of the economy, it’s already clear the effects have been more drastic—a total, sudden power cut that leaves the machinery defunct. Some things will be nearly impossible to start again. Others are broken entirely.

The kill-switch effect is immediately evident in cities, where many restaurants and local stores have closed their doors for good, and many large companies are deciding to shrink their footprint with cascade effects that will last years, not weeks. It’s hitting entire industry sectors as well: Conventions, public events, concerts and sports have vanished indefinitely, wiping out entire networks of businesses that need them to thrive. Big institutions like hospitals and nonprofits have cut back so deeply that many will need to rebuild if they survive at all. The repercussions are everywhere. Canceled summer camps are a temporary inconvenience for parents but put a year-sized dent in the economies of the small towns that depend on them for local income. The list could go on and on. Yes, economies can be rebuilt, and the human race is likely to be fine on the other side of the pandemic. But the harms done to address the virus are harms nonetheless.

There are good reasons to see bright horizons for companies like Amazon and Zoom. But overall, the signs of hope that investors have rallied around are highly selective at best (though with endless liquidity from the Fed, investors have other reasons to bid stocks up than solid fundamentals). When American Airlines announced that its flights are 62 percent full, investors treated it as a positive sign, except if you dig deeper it turns out they’re flying only a third of the flights domestically that they were a few months ago. The recent jobs report was taken as a victory because it showed only the worst unemployment numbers since the Great Depression, rather than the even worse numbers that were anticipated. And as the emergency federal relief programs wind down in the coming weeks, it is difficult to forecast that bad news on the employment front won’t get worse over the summer. We can hope that it might not, but as they say, hope is not a strategy. Jerome Powell, chair of the Federal Reserve, warned last week that vaccine or not, we are at least two years away from picking up where we left off at the beginning of 2020. And that’s in a best-case scenario.

It’s also becoming clear that a shutdown, or at least a pause, might have to happen again. And again. New York Governor Andrew Cuomo warned over the weekend that relaxing of social distancing could lead to a new set of shutdown orders. Coronavirus is not going away, and there is the question mark of a second wave come the fall. In the United States, as cases and hospitalizations have receded in the Northeast, they’re accelerating in California, Florida and Texas. Overall, the U.S. is at a plateau—fortunately, nowhere near as dire as projections anticipated in early May, but also nowhere near as benign as those who have dismissed the threat contend. Globally, many countries, such as India and Brazil, are seeing their biggest waves only now; those could easily bounce back to the U.S. once more travel resumes.

America is gingerly reopening right now, but at the same time, policy leaders need to think hard—and fast—about what a smarter shutdown response for future waves might look like. How can it be more like an off switch, and less like a kill switch?

Recognizing that shutdowns are brutal and blunt, there has been deeper thinking about what to do going forward, not just in the U.S. but globally. Leaders in most countries recognize that there will be far less public support for a second round of shutdowns, and much less latitude for governments to ameliorate the economic consequences. In the United States, Treasury Secretary Steven Mnuchin, the Trump administration’s point man who has been able to work with Democrats in Congress to structure the trillions in emergency spending, said last week, “We can’t shut down the economy again.” Our system won’t be able to afford it.

In Europe, a group of researchers spread over nine countries modeled multiple scenarios for how to confront a future surge. Those ranged from another round of draconian lockdowns (and many European countries enforced the shelter-in-place order much more stringently than anywhere in the United States) to what could best be called a “Sweden strategy” of letting future waves run their course with limited government intervention. The most effective strategy, according to their models, would be to alternate 50-day strict lockdowns followed by 30 days of opening, followed by more lockdowns as need be. As one of the researchers noted, that strategy would at least allow the population “to breathe” periodically and reduce the risk of social breakdown.

That’s not a fully reopened economy, but it creates a metabolism, and some certainty about what happens next. The problem with the haphazard American approach in March (and with most policies even now) was that there was no road map, no timetable, no metrics that were clear and understood, and no cohesive safety net to assure people that all would be temporary. Washington and the states made their own rules; Congress scrambled to repair the damage, which is hard when you have no idea how much damage you’re contending with. The whole thing was a blunt-force instrument, with no special protections or rules for vulnerable populations, and no grappling with the basic inequalities at play: Even with a shutdown, millions of people must keep working; overwhelmingly, people of color who lack economic safety nets and good health care and, as the mass protests against police violence expose, don’t feel safe even in the absence of a deadly disease.

Another idea to avoid hitting the kill switch again has been developed by an Israeli group at the Weizmann Institute in Tel Aviv: People would work in two-week cycles of four-day workweeks, followed by 10 days of voluntary quarantine. Schools would follow a similar pattern. This would allow people to “platoon” at work. The logic is that even if people contracted the disease in that two-week period, the subsequent 10-day quarantine would reduce the infection rate in the larger society to below 1, which would in turn prevent wide-scale outbreaks. So would the reduced number of people commuting at any given time. Already, Austrian schools are adopting a modified version of this strategy. This plan does not require massive testing, and would allow for substantial resumption of economic activity.

Most of these plans work best for countries that have a high degree of centralized control and guarantee income for idled workers. That just isn’t the case for the United States. Regardless of the ineptitude of the federal response so far, absent a radical change in how public health is enforced or an invocation of a national emergency that might suspend the Constitution, Washington does not have the power to mandate strict lockdowns, or to tell companies to rotate workers and students along the lines suggested by the Israeli researchers. The decentralized nature of American responses to date will continue, which means that solutions will be state by state, and by nature divergent.

So what do localized off switches look like? In California, Governor Gavin Newsom has turned to a range of advisers to think through not just a reopening strategy but a strategy for staying open even in the face of possible new waves in the fall and into winter. One of those advisers, Bob Kocher, a medical doctor and now investor who served in the Obama White House, told me, “You need to have a more nuanced approach.” The goal for the fall is to be nimbler, to isolate outbreaks and target shutdowns rather than shut things down for everyone at once. There are pragmatic reasons for that beyond more effective disease containment: If people don’t see evidence that health care systems are being overwhelmed, it is unclear whether they’ll even accept or obey another wave of strict stay-at-home orders.

More systemic thinking has also been done by Avik Roy and the Foundation for Research and Equal Opportunity based in Austin, Texas. Roy had been a health care adviser to Mitt Romney during the 2012 campaign, and his foundation recently put together a blueprint for reopening even in the absence of a vaccine, effective treatments and coherent testing regimes. Their road map addresses that degree to which Covid-19 discriminates by age, and places emphasis on opening K-12 schools with modifications and masks as well as doing whatever possible to reduce nursing home deaths and spread. The main thrust is that no country can sustain another lockdown for long, and that the virus may be with us, uncontained, for some time. That means, he says, that “instead of thinking up creative ways to force people to stay home, we should think hard every day about how to bring more people back to work.”

No one, of course, will craft a perfect solution. Every country and every one of us faces a spectrum of unappealing choices. Counting Covid deaths makes sense in the short term as a litmus for whether approaches are working, but deaths aren’t the only metric of whether a society is flourishing; long-term economic damage exacts its own toll on national well-being, and may ultimately cost lives as well.

It’s easy enough to despair about what seem at first glance to be a series of Sophie’s choices: death and social fraying now from the disease, or later from the shutdowns. But there is so much we don’t know about Covid — why it hit so hard in Belgium and yet hardly at all in Japan, for instance, or why Vietnam escaped largely unscathed but Iran did not. What is clear is that the United States has no viable way in the next months to become a more centralized, consensus-driven cohesive country—but there is cogent thinking about how to craft a pragmatic set of policies that do the least harm to our systems going forward. This is important not just for the economy but for our sense of shared effort: Unless people see road maps and clear plans, they might decide to pull their own personal kill switches in the face of localized surges, retreating from activity—which might keep them individually safe, but adds to the economic friction, and signals a problematic lack of trust in the system.

The challenges in the year ahead will be not just to design a smart reopening, but to design contingencies for smart reclosing if there are second waves. Critiquing what we already did in the face of an alarming unknown is pointless; learning from it going forward is imperative.