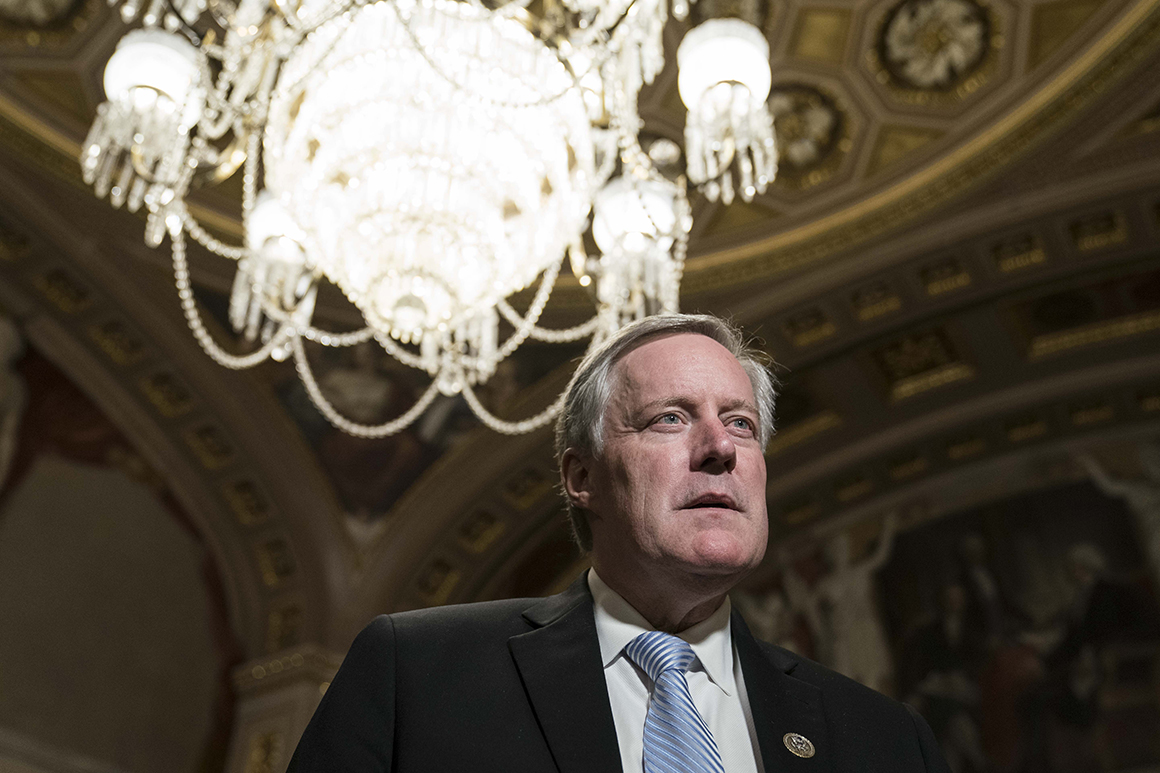 The race itself has drawn national interest because of its connection to Meadows, one of the president’s closest congressional allies. And the insinuation that he is actively working to elect a candidate that may have publicly bashed Trump has added an extra layer of intrigue.

“It’s edited to make it appear that she’s against the president when she’s actually very much for, and I happen to know that,” Meadows said in an interview last month shortly after the message went out. “There is zero chance that my wife would have endorsed Lynda Bennett had she been even remotely against the president of the United States.”

Two days after the mass text, Meadows doubled down and endorsed Bennett himself over a field of a dozen contenders that includes a state senator and his former congressional district director.

Some local GOP leaders had urged the congressman not to endorse out of anger at the way he announced his surprise retirement just 30 hours before the state’s filing deadline. They quickly speculated that Bennett, a friend of the Meadows’, had advance notice of his exit and that the congressman timed his decision to help her — a charge that Meadows and Bennett deny.

Bennett’s ties to Meadows, his wife, Debbie, and her devotion to the president have become a prominent topic of discussion ahead of the March 3 primary that will extend into a May runoff if no candidate clears 30 percent of the vote.

So have the mysterious text messages, which baffled local party officials, who cannot determine the origin and scope of the message or the veracity of the audio tape.

“It’s caught some people off-guard, not knowing exactly when, where, who and what any motivation may have been,” said Aubrey Woodard, the 11th District GOP chairman. “It’s definitely a mystery. It certainly is. I don’t know if that’s to have an effect on her electability one way or another, but it’s certainly not something she wanted to have out.”

The texts were sent out from a D.C. area-code number around 5:30 p.m. on Wednesday, Jan. 29, according to a survey of screenshots from five different recipients obtained by POLITICO. Those texts were all sent from different numbers, though all but one had the same exchange, (915). Attempts to call those numbers yielded an automated response that none were in service.

This account comes from interviews with a dozen people who live in or have connections to western North Carolina, including registered Republican voters in five counties across the district who all received the audio file via text. The message was also sent to the cell phone of a POLITICO reporter.

Accompanying the file is a text message: “Please listen to this audio from Lynda Bennett, GOP candidate for NCs 11th Congressional District, & hear where she stands on President Trump in her own words.”

The audio is purportedly taken from a fall 2016 meeting of Haywood County Republicans, according to three people who were at the meeting. The discussion centers around palm cards — handouts given to voters outside polling locations that advocate for a slate of candidates.

Some Republicans wanted names of certain GOP nominees to be taken off the palm cards that would be distributed outside the polling location, according to Bennett and Ken Henson, the chairman of the Haywood County GOP, who was also present at the meeting.

Bennett said she advocated for the inclusion of all candidates, including Trump, but that the audio was chopped to suggest otherwise.

“They have cut off the beginning and the end, and they just grabbed this part out of the middle,” Bennett said in an interview this week. “I’m saying, ‘This is what I’ve been hearing,’ and then I mimic the ‘Never Trumpers.’”

Bennett said she had been supportive of the president for years. The clip, she said, was “taken completely taken out of context” and was likely “a coordinated attack” from one of her opponents or an outside group.

Versions of the audio have been circulating among Republicans in the district. Monroe Miller, a GOP activist from Haywood County, said he created the original audio of the meeting and posted two unedited segments of it to his website this month, along with 11 pages of typed and handwritten notes and a diagram of the meeting room. But he denied coordinating any text message pushing out the audio to voters in the district.

Miller is a member of a local Republican faction, sometimes called the “Haywood Five,” that has openly sparred with the leadership of the Haywood County GOP.

He disputes Bennett’s account of the meeting. Miller said he did not think she was imitating anyone and that he believed her to be opposed to Trump.

“This came out spontaneous,” Miller said of her “Never Trump” comments. “It’s pretty evident from the recording. She just went off, and I didn’t view that as role-playing.”

“She was very vocal,” he said. “Lynda was a very opinionated person.”

Some local Republicans suspect a candidate or outside group hoping to fracture the field along the lines of Trump loyalty— a key fault line in GOP primaries — coordinated the message, possibly by contracting a firm that offers peer-to-peer text messaging.

Candidates will have to file “pre-primary” campaign-finance reports with the FEC on Feb. 20, but it could be easy to disguise an SMS-texting payment as vague expenditure for consulting or another service.

The filing deadline will also offer a look at which candidates are the most formidable ahead of the Super Tuesday race. Without any public polling, it’s not clear if Bennett is even in the top tier of candidates. A dozen Republicans filed to run for the solid GOP seat, but only a handful have spent money on television advertising.

State Sen. Jim Davis, the only current state legislator in the race, is likely a frontrunner. Wayne King, Meadows’ former district director, is also running, as is businessman Chuck Archerd, veteran Dan Driscoll and Madison Cawthorn, the survivor of a near-fatal car accident.

Bennett has two outside groups supporting her on the airwaves. Meadows cut a direct-to-camera TV ad for House Freedom Action, the political arm of the Freedom Caucus, in which he calls Bennett a “good friend” who will “work with President Trump to drain the swamp.”

It’s possible that no member has yoked their fortune more tightly to Trump than Meadows, who said he is leaving Congress after four terms to serve in an as-yet-undefined role in Trump world.

The president notably gave both Meadows, his wife and the race a shout out in his post-impeachment victory speech last week at the White House.

“He’s just a very special guy,” Trump said, gesturing to Meadows. “His wife I actually like better than him, to be honest.”

He also asked Meadows about a possible successor: “You got somebody good to run? Somebody going to win your district by at least 20 points? Please?”