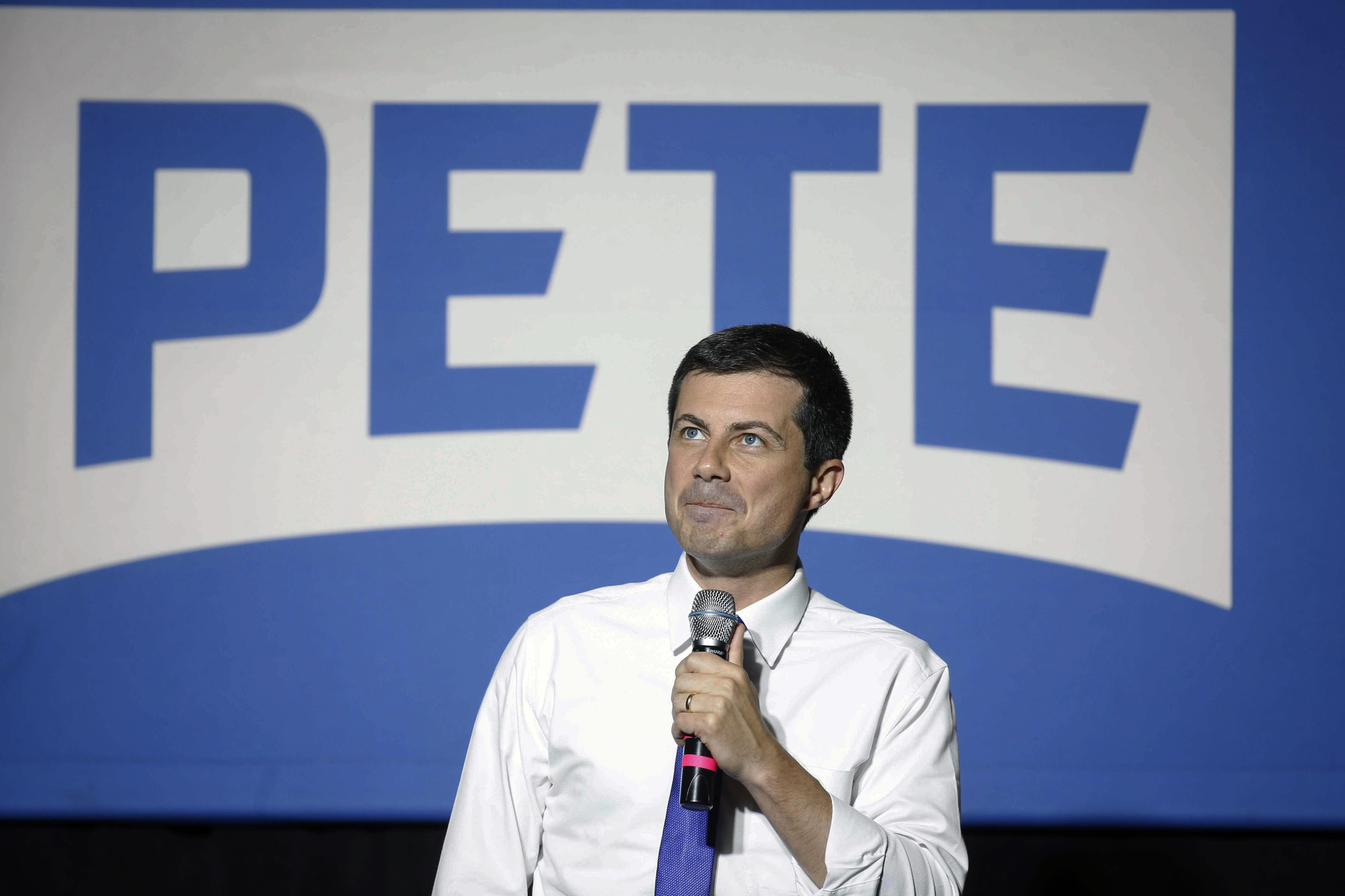 Buttigieg’s improbable and history-making campaign survived and thrived on momentum. Eventually, it ran out on the former mayor of South Bend, Ind.

After breaking out in 2019 as a gay, veteran, millennial, Midwestern mayor and claiming victory in the disputed Iowa caucuses in early February, Buttigieg finished one place lower in each successive state. He slipped behind Bernie Sanders and Biden, both of whom demonstrated strength among voters of color, a persistent weakness for Buttigieg. Mike Bloomberg and his $500 million in TV ad spending loomed ahead on Super Tuesday, while Buttigieg’s own cash reserves dwindled.

Following breakfast with former President Jimmy Carter in Plains, Ga., Buttigieg conceded to reporters Sunday morning that Biden’s victory in South Carolina was “convincing,” and 12 hours after that, Buttigieg had rerouted his campaign plane to South Bend, where he told supporters his path “has narrowed to a close.”

“We have a responsibility to consider the effect of remaining in this race any further,” Buttigieg said Sunday night. “We must recognize then at this point in the race, the best way to keep faith with [our] goals and ideals is to step aside and help bring our party and our country together.”

Buttigieg didn’t mention any other candidates as he dropped out of the presidential race. But his decision is inextricably linked to both Sanders’ and Biden’s rise in 2020. In his last weeks as a candidate, Buttigieg repeatedly criticized Sanders, warning against the Vermont senator’s “revolution with a tenor of combat, division and polarization.” He started airing attack ads against Sanders in South Carolina that said “instead of polarization, progress.”

And Buttigieg used his dropout speech in South Bend to call for “a broad-based agenda that can truly deliver for the American people, not one that gets lost in ideology.”

Meanwhile, Buttigieg’s exit delivers “the first break in the logjam in the center of the party,” said Ace Smith, a California-based strategist who worked on Kamala Harris’ presidential bid. “That, plus Steyer getting out, benefits Biden tremendously.”

That “logjam” has been a growing concern for moderate Democrats in recent days, as Sanders climbed in the polls following victories in New Hampshire and Nevada. That concern translated into pressure on Buttigieg’s campaign. As results trickled in from South Carolina Saturday night, some of Buttigieg’s chief fundraisers and backers fielded calls from top Democratic donors, who urged them to ask Buttigieg to drop out and help unite the Democratic Party, according to donors who fielded those calls.

Once Buttigieg did leave the race, Rep. Don Beyer of Virginia, who was the first member of Congress to endorse Buttigieg last spring, quickly threw his support to Biden on Sunday night. Buttigieg exchanged voicemails with Biden, according to a Buttigieg aide, but he didn’t make an endorsement during his speech.

Buttigieg’s rank-and-file supporters defied easy ideological grouping — he battled fiercely with progressive Elizabeth Warren and moderate Amy Klobuchar for voters in recent months, in addition to lobbing calls for “generational change” at Biden and Sanders. The coalition he built did not exist 14 months ago, when Buttigieg launched an exploratory committee in Washington, D.C., a bid to garner some attention from national political reporters, his aides later said.

He was just two years clear of the constitutional age limit to become president. But Buttigieg burst out of obscurity on the strength of his charisma and sharp, viral answers to media questions in the opening months of the campaign.

“It’s very unlikely that in the history of our republic, before this moment and after this moment, that something like this can possibly happen — that a candidacy like his would be taken seriously,” campaign manager Mike Schmuhl said in an interview with POLITICO last fall.

Buttigieg ultimately raised more than $100 million, much of which he poured into Iowa and New Hampshire, where he scaled up the campaign from a shoestring operation to a professional organization — though not without growing pains. He plateaued in polling after his spring splash, and by August, he still hadn’t nabbed a single Iowa endorsement.

Yet by the fall, Buttigieg turned his fundraising success into massive investment in the two earliest states, hiring staffers and sinking millions into TV ads to introduce himself to voters there. He criss-crossed Iowa and New Hampshire in buses filled with reporters firing off questions and chronicling everything he said — a “Live Tweet Express” update on John McCain’s freewheeling bus tours 20 years earlier. The TV ads, the attention and some strong debate performances sent his polling numbers soaring in Iowa in November.

But the campaign’s strategy — built, in part, on a sequential theory that one victory would drive the dynamic in the next — broke down under bizarre circumstances.

While Buttigieg finished first in the official delegate count in the Iowa caucuses, a result the Sanders campaign has challenged, long delays and errors reporting the votes out of Iowa robbed Buttigieg of a traditional victory tour, as well as the much-needed cash and national attention that comes with it.

Buttigieg still saw a polling bump in New Hampshire, but he also ran into a buzz-saw debate performance from Klobuchar, who eviscerated Buttigieg for his lack of experience — a longstanding gripe from other campaigns who noted that Buttigieg’s lone statewide run for office ended in a 20-point defeat in 2010. The debate may have prevented Buttigieg from winning New Hampshire, where he finished just 1.3 percentage points behind Sanders, and it knocked him down heading into Nevada.

“Even in a razor-close race in Iowa, if results had been reported definitely that night, Pete would’ve become a household name, and he probably could have won New Hampshire,” said a person close to the Buttigieg campaign. “The lack of results out of Iowa was a big problem because we didn’t get the level of the fundraising bounce we’d hoped for. We got some, but not enough.”

That drain on momentum put serious pressure on Buttigieg’s bank account, just as the contest widened to include 14 states on Super Tuesday. Buttigieg issued a plea to his supporters earlier this month to donate $13 million to help him through 2020’s biggest primary day. By this weekend, he’d brought in $8 million toward his goal, according to a person familiar with the total.

“He was a couple of bounces of the ball short from being right in the middle of this,” said David Axelrod, former President Barack Obama’s chief political strategist. “Iowa reports on time and he gets a bigger bounce out of there, or Amy Klobuchar doesn’t have the night of her life in that debate in New Hampshire and [Buttigieg] beats Sanders there, then we might be having a different conversation right now.”

Instead, “he ran out of runway,” Axelrod said.

Buttigieg was also never able to fix the fatal flaw of his campaign: his inability to draw significant support from voters of color. He drew strong criticism for failing to diversify South Bend’s police force and for his controversial firing of the department’s first black chief, as well as for a housing initiative that primarily impacted minority neighborhoods. In June, a white police officer in South Bend shot and killed a black man, aggravating deep grievances among African Americans in Buttigieg’s city.

Buttigieg and his campaign tried to build support with black voters, but there were notable bungles, from announcing disputed endorsements of his “Douglass Plan,” a policy platform focused on black America, to his campaign’s usage of a stock photo of a Kenyan woman, which was addressed on the debate stage last fall. “I’m sure someone agrees that was a big mistake,” Harris said at the time.

Concerns about Buttigieg’s failure to attract black voters eventually trailed him to predominantly white Iowa, where electability-mad Democratic voters wanted to know if Buttigieg could inspire a coalition that could beat Trump.

Buttigieg suggested that his problems with voters of color might improve after strong finishes in Iowa and New Hampshire. But he drew just 3 percent of the black vote in South Carolina on Saturday, according to exit polls.

While Buttigieg failed to win the nomination or break in with black voters, his campaign represented a significant milestone for the LGBTQ community.

In 2015, the Supreme Court enshrined same-sex marriage as a nationwide right, just a few years after Obama announced his support. On Sunday night, Buttigieg’s husband Chasten, who became a social media star in his own right over the past year, introduced Pete for his concession speech. Tearfully, Chasten Buttigieg said his husband “got me to believe in myself again, and I told Pete to run because I knew there were other kids sitting out there in this country who needed to believe in themselves, too.”

Buttigieg’s campaign also defied much of the conventional wisdom about the 2020 primary cycle. No other candidate changed their own political standing as dramatically as he did. He outlasted, outraised and outperformed governors and senators, ensuring his place in the national conversation.

His decision to leave the presidential race echoed Buttigieg’s first jump into national politics: the end of his bid for Democratic National Committee chairman in 2017. Buttigieg bowed out the morning of the vote in Atlanta when it became clear he didn’t have enough support, said Dan Parker, the former Indiana Democratic Party chairman who advised Buttigieg and was tasked with informing him that there was no path forward.

“His reaction was, ‘Really, you don’t see it?’ And it was our job to tell him the truth. I’m sure they had that conversation again recently,” Parker said. “It’s a really difficult conversation to have.”