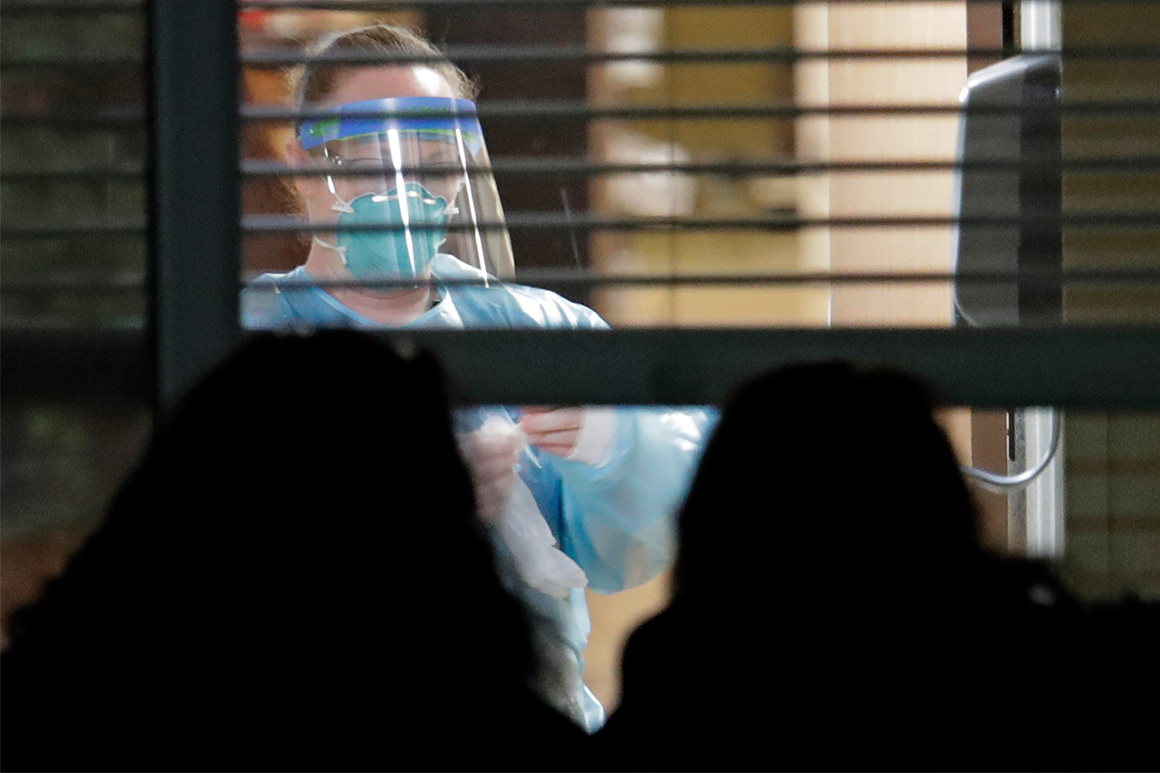 South Bend, Washington, population 1,637, is the picturesque seat of Pacific County, at the state’s southwest corner. Until March 13, the local buzz was that the coronavirus threat was “being hyped up to make Trump look bad,” longtime resident Jan Davis says. “That flipped around as soon as Trump declared an emergency. The next day [Pioneer Grocery, South Bend’s only food store] was cleared out. It still is. There’s still no toilet paper, baking stuff, rice, beans, or ice cream,” though produce and meat are readily available, Davis says. “It’s a terrible situation. What are poor people [who can’t afford to stock up] going to buy?”

“It’s frustrating,” says Rick Manlow, who owns and operates Pioneer Grocery with his brother. “We run right out of toilet paper and flour, and of course hand sanitizer and wipes the very few times we’re able to get hold of them. You throw them on the shelf and they’re gone in 10 minutes.” His bare shelves don’t just reflect panic buying, however. “We’re ordering 800 cases and getting 400. Our supplier is operating at way over capacity. They’ve been having challenges getting adequate staff, supply, even drivers for the trucks.” (The large chains by contrast purchase directly from manufacturers and have their own warehouses and truck fleets, so they’re protected from such problems at the wholesale level.)

Other small towns are in the same fix, says Jan Gee, president of the Washington Food Industry Association, which represents independent grocers and the wholesalers that supply them. “I’m getting repeated reports like this from our members,” Gee says. “It appears the large manufacturers are favoring the chains and big box stores.”

Slagel is now retiring, and the county hospital is buying him out so the 4,000 people it serves won’t be left without a pharmacy. The hospital, which has already treated one Covid-19 patient, also finds itself at the tail end of the supply chain. It ordered a ventilator last fall because those it had were outdated; CEO Aaron Edwards says the manufacturer finally sent one, the wrong model, in January. When Edwards tried to exchange it, after the coronavirus appeared, he says the manufacturer told him the one he’d ordered had been allocated to the Federal Emergency Management Agency instead.

When even entire states are bidding against each other for ventilators and personal protective equipment, tiny hospitals can be at a particular disadvantage, says Jacqueline Barton True, the Washington Hospital Association’s vice president for rural health programs: “When they go to buy 11,000 masks, the supplier says, ‘I have an order for a quarter million. I don’t have time for you.’”

Many rural hospitals were in dire financial straits even before the virus appeared. Buffeted by rural flight, rising costs, state budget cuts and restricted Medicare and Medicaid reimbursements, more than 170 nationwide have closed since 2005, 128 of them since 2010 and eight since January. Most were in the South and lower Midwest, particularly in states that did not expand Medicaid coverage under the Affordable Care Act; Texas lost 24, Tennessee 13, and Alabama 7. (Those are also states with high shares of uninsured rural residents.) Some hospitals are now reopening to deal with Covid-19. Washington state will take over one that closed in January in Yakima, a major agricultural hub, and reopen it for coronavirus care.

Many more rural hospitals in Washington are tottering and hoping this crisis doesn’t overturn them. A state-ordered moratorium on elective surgeries and other nonurgent procedures has choked off their largest source of revenue; many deferred them to conserve precious supplies even before the order came down. ER visits and the income they bring have also plummeted. Insurers pay less for the telemedicine that has replaced traditional office visits. These losses affect all hospitals, but urban ones, with their efficiencies of scale, are better insulated, with bigger cash buffers and more in-patient and critical-care treatment, which continues despite the moratorium.

The quickest way to rebalance hospitals’ books would be to do what so many businesses have done: trim staff. But the hospitals are loath to do that in the face of a pandemic, though many have been sending hourly workers home at reduced pay and letting salaried employees take unpaid days off. “You’re doing crisis prevention,” says Shane McGuire, CEO of the Columbia County Health System, the only hospital in nearly 1,000 sparsely inhabited square miles of southeastern Washington. “You need to keep your staff. So you have a high cost of operation and low revenues. It really is the perfect storm.”

Rural hospitals across the state have seen their revenues fall by a third to more than half since the emergency began. “We’re essentially equivalent to grounded airlines,” says Rod Hochman, CEO of Providence Washington, a nonprofit network of urban and rural hospitals, one of which treated America’s first Covid-19 patient. “We’ve grounded the economic activity that sustains the rural hospitals.”

As part of a large network, Providence’s hospitals enjoy access to resources, supply chains and lobbying clout that their independent and county-operated counterparts can only dream of. “We see our rural hospitals as mission-critical,” Hochman says. “What I’m worried about are those who aren’t connected, who don’t have support” from a network like Providence.

That would include Three Rivers Hospital in Brewster, which serves 15,000 residents spread across 5,000 square miles of central Washington scrub and prairie. Three Rivers went from running a small surplus in December to six-figure deficits in the ensuing months. “We’d been positioning to grow in 2020,” says Jennifer Best, its business development director. “Then we got blindsided.” Now Three Rivers is one of five rural hospitals the Washington State Hospital Association warned faced “imminent closure” in a March 20 letter to Governor Jay Inslee pleading for state relief. They have less than two weeks’ cash on hand, says the association’s Barton True; 15 more have less than 45 days’.

All those hospitals are still hanging on, with a little help. The state kicked over $2 million in emergency funds—about $140,000 for each eligible hospital, enough to keep the doors open for a week or two. Because of the lag in insurance reimbursements, they’re still receiving payments for procedures performed in the halcyon days of January and February. And they’re anxiously peering through the murk of the federal coronavirus response to discern what share they will receive of the $100 billion designated for hospitals and other care providers in the $2 trillion coronavirus relief package signed into law March 27. Clarity is slow in coming.

That act also authorizes Medicare to send hospitals three months of “accelerated payments” (six months for small, rural critical access hospitals) based on what they billed last year. These are not grants, however, but loans against future earnings. Some rural hospitals are grabbing for this lifeline. Others view it warily, fearful of incurring debts they can’t repay.

Providence’s Hochman sees another source of emergency funds for hard-pressed hospitals: “Private insurers have cash sitting in the banks—essentially all the elective surgery they would pay for isn’t happening.” Why not advance that cash to hard-pressed hospitals? he asks. “We’re pushing on that.”

He offers one more blunt piece of political advice: “Very quickly, rural hospitals have to figure out who their friends are.”

A sizable share of rural Washington lies within its 29 Native reservations, which cover 6 million acres spread around all but the state’s southeast quadrant. Covid-19 could hit Indian Country especially hard. The tribes have limited medical resources; none have their own hospitals, and some don’t have clinics. That’s one reason many have started early and worked hard to keep the coronavirus out of their communities, or contained once it’s in.

A little south of the Canadian border, the Lummi Nation, with 20 confirmed Covid-19 cases, has installed a 21-bed care center next to its clinic to absorb any overflow from the nearest hospital, in Bellingham. Thinking ahead, the Lummi stocked up on medical and safety supplies in January and declared an emergency on March 3, 10 days before President Donald Trump did. The smaller Suquamish Tribe, which lacked a clinic, is now building one.

“We have a population with adverse underlying conditions,” says T. J. Greene, chairman of the Makah Tribe. “Nationwide, Native populations have higher rates of diabetes and heart disease.” He figures that between elders and those with compromised health, a sixth of the 1,800 residents would be especially vulnerable if the virus reaches the isolated Makah reservation at the state’s westernmost point.

It hasn’t, as far as anyone knows. To keep it that way, the Makah have installed a 24-hour checkpoint on the only road into their village, excluded visitors, closed their popular (and spectacular) oceanfront hiking trails to outsiders, and urged residents to leave only for emergencies.

The tribes along more densely inhabited Puget Sound, especially those with intermingled “checkerboard” territories, don’t have the option—another big source of concern. The Tulalip Tribes abut the blue-collar town of Marysville in Snohomish County, where America’s first Covid-19 case appeared. They have 10 active cases, with two more suspected and 12 test results pending, but until a few days were able to obtain only 50 test kits at a time. Thanks to the community grapevine, “we’d hear if a native person got sick,” Chairwoman Teri Gobin says. “But most people living on the reservation are nonnative. On most reservations, we don’t know who’s sick [among nonmembers] unless they self-report.”

Thirty miles up the Sound, the smaller Swinomish Tribe has seen just one Covid-19 case, in a young nontribal resident. The Swinomish could follow the Makahs’ lead and close the bridge connecting their reservation to the mainland, but that would compound the disruption the epidemic has already brought. “We’ve talked about it, but not yet,” deputy tribal Chairman Joseph Williams says. “We don’t have a grocery store, so we’d have to get all that stuff delivered. And over half the population is nonnative”­—and, presumably, more likely to resist.

The tribes have taken a heavier economic hit than other communities, even as they struggle to get emergency funds and medical supplies from the federal government. Local cities and counties, which have ongoing tax revenues, have retained all or most of their employees. With limited taxing authority, most tribes depend on their casinos and hotels, which closed in early or mid-March. “We’ve furloughed 95 percent of our gaming staff and 85 to 90 percent of government staff,” Gobin says. The Makah depend on fishing rather than chips, but with the restaurants and processors who buy their catches shut down, their boats sit as idle as the casinos to the east.

Unemployment and forced isolation fray the social fabric. “We’d had a pretty good stretch since we opened our wellness center,” Williams says. “We didn’t have any overdoses for a couple years. Since then, we’ve seen extra drug problems. We’re seeing a rise in alcohol and marijuana sales” at nearby stores.

Down at Tulalip, Gobin hasn’t seen a rise in alcohol problems or domestic abuse, but the local cannabis shop “spiked to its highest sales ever.” What saddens her is the way cherished traditions must yield to public safety. “Our funerals are not one or two days,” she says. “We’re there for the family all week.” When a beloved elder died of Covid-19, “we could not do that. The family couldn’t be there at the cemetery when they put her in the ground. They had to do it with the nurse putting them on FaceTime.

“I can’t imagine burying my mother without being there.”