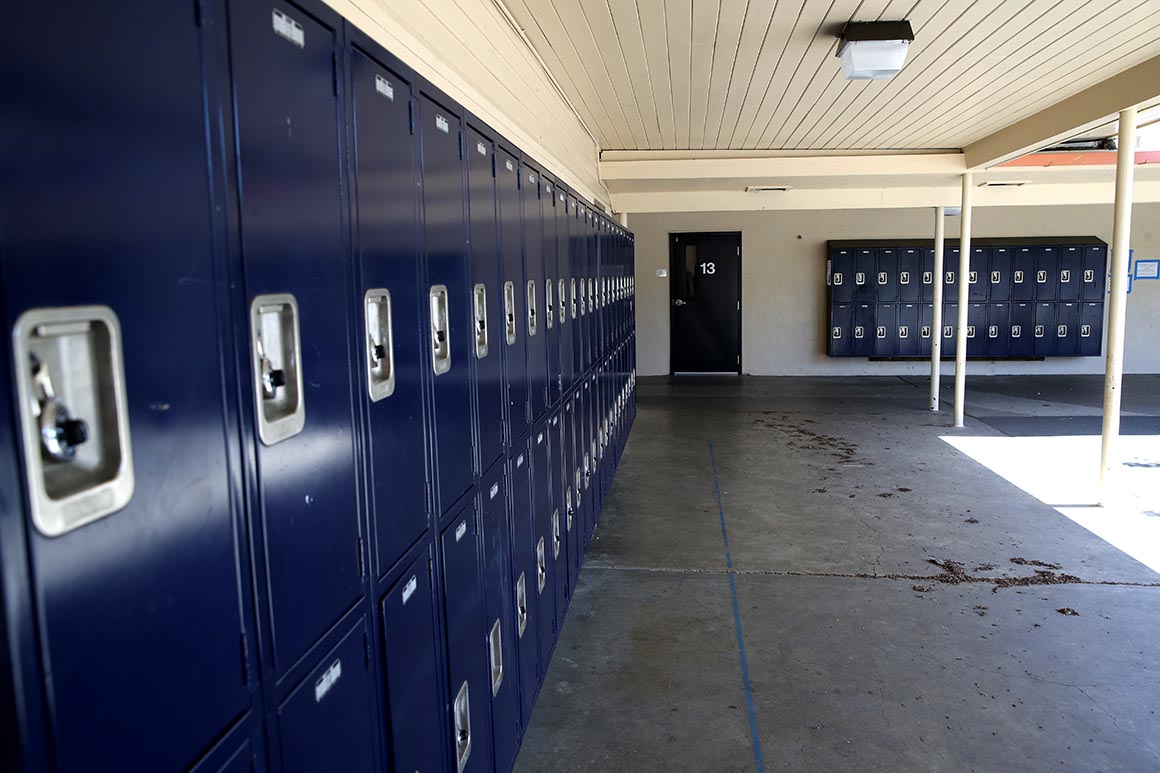 “I’m a mother and I think I can speak for all moms and dads that we’ve all sent kids to school when they have the sniffles,” said Raimondo, a Democrat. “We can’t do that anymore. We have prided ourselves on a perfect attendance culture. That’s going to have to change.”

Changes are also going to be needed to protect teachers and staff more susceptible to the virus, Plescia said. Principals may need to find a way to employ teachers in settings outside the traditional classroom or offer some type of distance learning to students with underlying conditions.

“We’re not going back to how the school system was any time soon,” he said. “People are going to have to be ready for it.”

Education leaders say all these changes will require additional funding and many decisions are on hold until they know what’s coming. An analysis by AASA and the Association of School Business Officials found that the average U.S. school district may need to spend an additional $1.8 million to reopen school buildings, given new expenses for health monitoring and cleaning, additional staffing, protective equipment and transportation.

“Time is running short,” Domenech said. “Decisions have to be made. Staff has to be hired. You’re going to do all these things, you have to be ready for it and you have to have the money to be able to do it.”

Districts are experiencing a “degree of paralysis” because they’re anticipating a 20- to 30-percent cut in state aid, which will be “devastating,” John King Jr., the president and CEO of the Education Trust and former education secretary, said during a June 10 Senate hearing. “That will mean layoffs, program elimination. And so districts are, in a sense, stuck waiting to see if Congress will help states,” he said.

An analysis by the National Education Association projected a loss of 1.9 million education jobs in public schools and universities by fiscal 2022.

“For us to think that we are going to send our students back to school safely and provide them with the quality education we believe they all deserve — we know that cannot happen,” Becky Pringle, NEA vice president said during a House hearing. “We need the Senate to act right now.”

The CARES Act provided more than $13 billion in K-12 emergency funds and the House-passed HEROES Act includes nearly $58 billion for K-12 but it’s unclear when the Senate will take up its next relief measure. Dozens of prominent education groups are calling for $500 billion for state and local governments and at least $175 billion for K-12 education.

Wilson, the Buckeye Elementary School District superintendent, said she’s in a “holding pattern,” waiting for the out-of-session Arizona state legislature to change a state law that she says could prevent schools from getting full funding if students aren’t learning inside a classroom. Arizona Gov. Doug Ducey, a Republican, who is contending with a fresh outbreak and a record number of hospitalizations, announced last month that schools may reopen in August though the state provided few definitive answers on how when it released guidance earlier this month.

The one-time infusion of CARES Act cash helps with protective equipment, but it doesn’t help Wilson hire and maintain additional staffing to keep students socially distanced. Busing is another problem: Attorneys sent her transportation guidance calling for fewer riders — and suggested protecting the driver with everything from a mask to a shower curtain. Teachers and districts, meanwhile, are “frantic” over whether they’ll get sued.

“It’s awful,” she said. “I don’t sleep. I’ve been a superintendent eight years, and I’m just worried. It’s hard to put into words.”

Most school superintendents haven’t announced when their schools will reopen and resume in-person instruction, even if more than half say they “intend” to open on time, according to a nationwide survey from AASA, conducted between May 5 and June 8.

More than half, 56 percent, replied that “we intend to open on time” when asked to describe their district’s decision status while 32 percent said “we are considering a modified schedule” and 16 percent said “we have not yet begun planning.” Thirteen percent said they “anticipate a delayed opening.”

“The guidance from state and local health officials is evolving on a day to day basis,” said Christian Rogers, AASA policy analyst. “That’s really impacting when superintendents are able to know for certain when they’ll be able to resume normal school operations.”

If superintendents don’t know what’s going to happen, multiply the uncertainty “by 100 for every principal,” Farrace said. All they know is there will be a “tidal wave of issues” they’ll have to figure out how to manage “because once [students] are in the school, there’s really no other level to to kick it to,” he said.

A USA TODAY/Ipsos poll last month found 1 in 5 teachers say they are unlikely to go back to school if their classrooms reopen in the fall, and a parallel poll found that 6 in 10 K-12 parents are likely to pursue at home learning options rather than in-person school. And last month, a POLITICO/Morning Consult poll found 41 percent of registered voters think it’s a bad idea to reopen K-12 schools in the fall while about a third think it’s a good idea for children to resume in-person classes or go back to child care.

Utah’s GOP Gov. Gary Herbert’s announcement that most K-12 schools and colleges would welcome back students in August drew a backlash from concerned parents and students. The state is seeing a spike in coronavirus cases that has forced Herbert to pause reopening.

In North Carolina, a state where the recent uptick in cases has caught the attention of the White House, Democratic Gov. Roy Cooper said one of the primary reasons he is concerned about his state’s current spike is that it will make it that much harder to open schools, which “are vital to learning, physical fitness and social interactions and for many students it’s also a place for healthy meals, safe environments, stability and routine.” Schools are set to return, by law, on Aug. 17.

Educators in Wake County are worried, said Kristin Beller, president of Wake North Carolina Association of Educators. Some have concerns about health conditions while others shared fears about having to tell students about a teacher dying or a fellow student. Earlier this month in neighboring Durham County, a second-grader died from Covid-19 complications.

“There’s a lot of anxiety and fear,” Beller said.