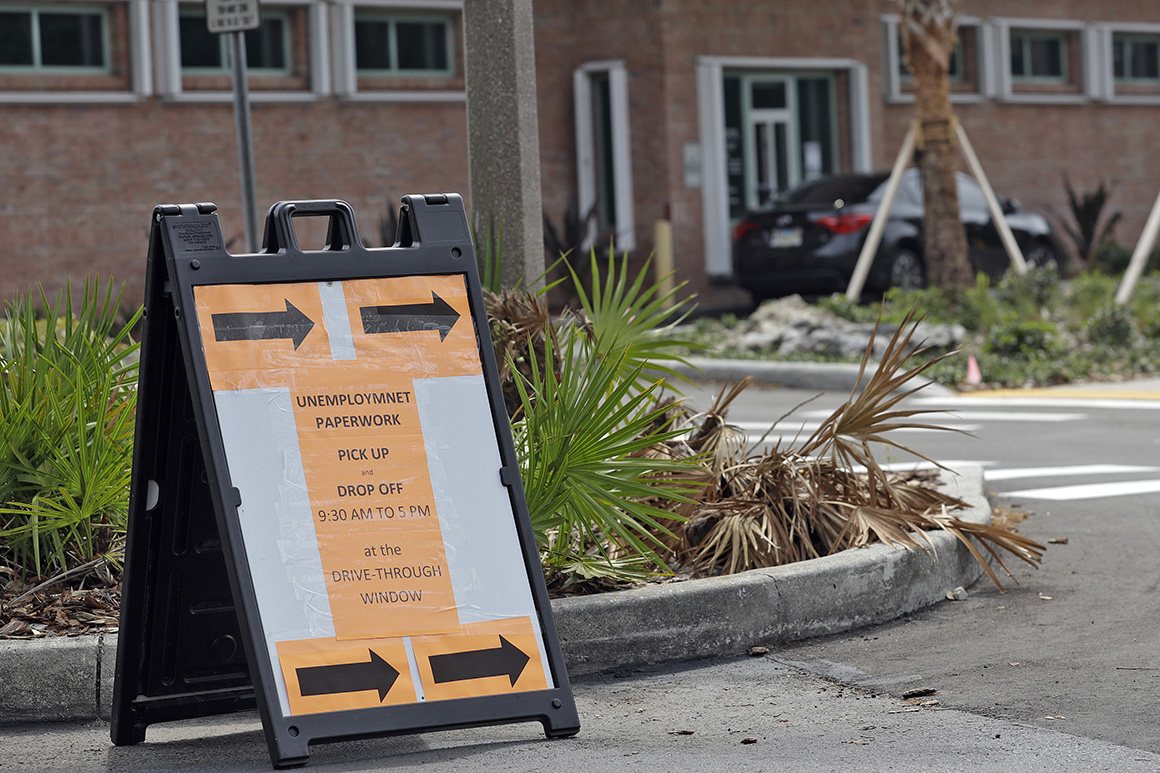 The mass of jobless workers struggling to get through to state unemployment offices remained concentrated among lower-wage occupations, but it’s also starting to include middle and professional classes as quarantines and lockdowns spread economic misery upward. The International Monetary Fund forecast earlier this week that the U.S. economy will shrink by 5.9 percent in 2020.

„Records are being broken left and right with respect to the depth and breadth of the current downturn,“ said Mark Hamrick, senior economic analyst for Bankrate. „With no immediate end in sight to efforts aimed at mitigating the virus’ spread and impact, it is impossible to see a near-term upturn in employment prospects.“

The unadjusted raw number of claims over the past four weeks totals 20.1 million, according to Indeed Hiring Lab’s director of economic research Nick Bunker, indicating that at least 13.25 percent of employed workers have lost their jobs due to the pandemic.

This week’s report is the first to record some claims by self-employed workers, who were made temporarily eligible for jobless benefits under Congress’s $2 trillion coronavirus rescue package. Many, however, were still waiting this week to have their claims processed as state unemployment offices struggled to update their systems.

„Americans are making sacrifices for the wellbeing of the country, and the Trump Administration is moving quickly to support workers and small businesses during this difficult time,“ Labor Secretary Eugene Scalia said in a prepared statement, adding that the agency has „issued all the essential guidance the States need to implement the historic unemployment benefits expansion“ created under the relief package.

The coronavirus bill also increased all unemployment payments temporarily by $600, but only 29 states have disbursed that sweetener, Scalia said Wednesday, blaming computer equipment in some states “that is 40 years old and in need of significant IT support.”

Of the estimated 22 million Americans who have filed unemployment claims over the past month, DOL’s data indicate that 60 percent are now receiving benefits, according to Andrew Stettner, senior fellow at The Century Foundation.

This latest grim picture of the labor market comes as President Donald Trump ramps up pressure on states to reopen the economy. But with the number of confirmed coronavirus cases past 600,000, states are hesitating to move too quickly.

The job losses continue to hit the retail and services industries hard, as well as the health care, manufacturing and construction industries. On Thursday, the U.S. Census Bureau reported a record-breaking 8.7 percent March drop in retail sales.

The greatest number of new unemployment claims was in California, which processed an estimated 660,966 last week. Over the past month, nearly 14.4 percent of the state’s workforce has sought jobless benefits.