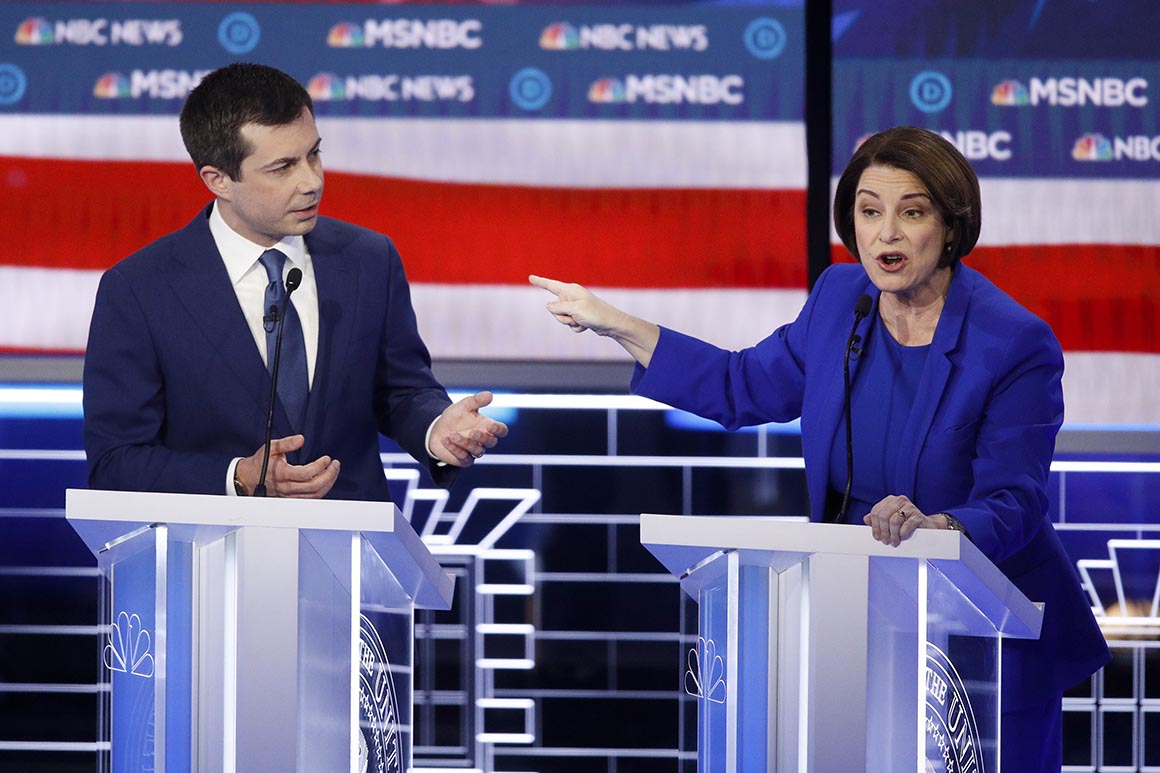 After the Minnesota senator defended her “momentary forgetfulness” when she failed to name the president of Mexico in a recent Telemundo interview, Buttigieg leaped in, surely thinking of the criticism he’s taken from Klobuchar in recent debates.

“Are you trying to say that I’m dumb? Or are you mocking me here, Pete?” Klobuchar shot back.

It exploded again when Buttigieg blasted Klobuchar on her vote to confirm President Donald Trump’s nominee for Customs and Border Patrol, who “was part of family separation policy,” Buttigieg said.

“I wish everyone was as perfect as you, Pete,” Klobuchar said. “But let me tell you what it’s like to be in the arena.”

It’s clear that the fury is rooted in the personal as well as the political for the two Democratic campaigners.

Politically, Buttigieg and Klobuchar are both hawking middle-of-the-road, tell-it-like-it-is personas, which they argue Democrats need to carry the Midwest, the region they call home. They are both competing to emerge as the main moderate alternative to Bernie Sanders, the current polling frontrunner.

But the rivalry runs deeper than their political positioning. Klobuchar has regularly spoken about sexism on the campaign trail, explaining that she is willing to call out “double standards” for female candidates because “we have to grapple with the fact that some people think a woman can’t win” against Trump, she told POLITICO in January. And this fall, Klobuchar said that a woman with the former mayor of South Bend’s resume and qualifications would likely not be on the presidential debate stage or get treated as a serious national candidate.

Klobuchar’s frustration with Buttigieg bubbles up most intensely when it comes to that experience.

Buttigieg, who served eight years as mayor of a 100,000-person city, is an up-and-coming candidate who quickly scaled the political ladder. For reference, Klobuchar served eight years as Hennepin County attorney and then another 12 years as a senator from Minnesota before she launched her presidential bid.

And while Klobuchar struggled to break out of the primary pack last fall, her fellow Midwestern colleague surged in Iowa and ultimately jumped into a tight battle for first place in the delegate count from the first caucus state earlier this month.

Klobuchar has hit Buttigieg hard before, accusing him of mocking the “hundred years of experience” represented on Democrats’ December debate stage and adding that she hasn’t “denigrated your experience as a local official.”

But Klobuchar often kept her criticisms narrowly focused on Buttigieg lack of experience, a clear area of contrast between the two. Instead, on Wednesday night, Klobuchar hit out not only at Buttigieg’s experience but at his core principles.

When Buttigieg questioned her votes for Trump nominees, the moderators tried to cut Klobuchar short, but she cut back in as Buttigieg snapped back.

“You know what, Pete? If you could let me finish, since I’ve been in the arena,” Klobuchar said, rattling off the list of bipartisan efforts she worked on to address the immigration crisis. “You have not been in the arena doing that work. You’ve memorized a bunch of talking points.”

Buttigieg returned to his point that “you don’t have to be in Washington to matter.”

“I’m used to senators telling mayors that senators are more important than mayors, but this is the arena too,” he said. “You don’t have to be on Capitol Hill for your work to be significant.”

Klobuchar acknowledged the confrontation with Buttigieg was “personal” in an interview with MSNBC following the debate, calling the former mayor’s attacks “quite obvious.”

“We are surging,” said Klobuchar, who came in a surprise third-place finish in New Hampshire, behind Sanders and Buttigieg. “I think Pete decided he’s going to try to go after me.”

On Wednesday, the tensest exchange between Buttigieg and Klobuchar may have produced a different winner entirely: Elizabeth Warren, whose recent slide in the polls has appeared to benefit both Midwestern candidates. After Buttigieg and Klobuchar tangled over the Mexican president’s name, Warren jumped in to defend her Senate colleague.

“Can I just defend Senator Klobuchar for a minute? This is not right. I understand she forgot a name,” Warren said to applause. “It happens. It happens to everybody on this stage.”