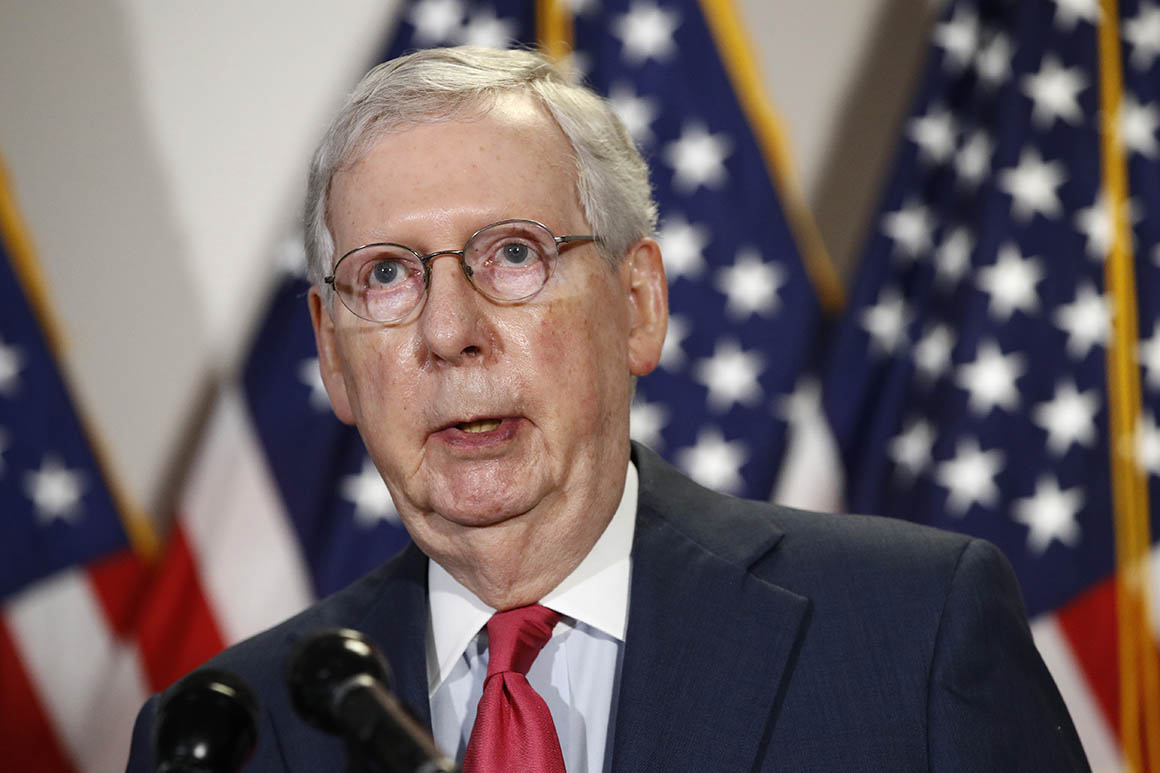 After POLITICO reported that McConnell planned to remain GOP leader after the election, the Senate Democrats’ campaign arm declared that every vulnerable Republican should “answer whether they plan to vote to keep their toxic leader in charge if they are in the Senate next year.”

McConnell, who came to Capitol Hill as an intern in the early 1960s, won his first Senate race in 1984 and quickly rose through the ranks. He served as National Republican Senatorial Campaign Committee chairmen for two cycles beginning in 1998, followed by a stint as majority whip. After Republicans lost their majority in the 2006 Democratic landslide and Sen. Bill Frist (R-Tenn.) retired, McConnell became minority leader. The Republican victory in 2014 catapulted McConnell into his dream job as majority leader, and he’s been unchallenged ever since.

McConnell is already the longest-serving Republican leader in history, passing former Sen. Bob Dole (R-Kansas) for that honor two years ago. Now the record of 16 years for any party leader held by the late Sen. Mike Mansfield (D-Mont.) is within reach if McConnell can get reelected while continuing to win leadership races.

“If he were to serve another term, he would either tie or break Mike Mansfield’s record, I know that,” said Sen. Lamar Alexander (R-Tenn.), who is retiring and has been among McConnell’s closest allies.

The esteem for McConnell is so high among Republicans that those who could eventually replace him have no issue with him staying on as long as he wants. And that makes McConnell’s hold on leadership rock solid.

“Mitch McConnell will be our leader as long as he’s still interested in the job,” said Sen. John Cornyn (R-Texas). “After he leaves that position, I would be interested in succeeding him.”

“The leader’s made it clear that he wants to continue to serve and he enjoys great confidence in the conference,” said Senate Majority Whip John Thune (R-S.D.). “My expectation is that, irrespective of what happens in November, he’ll continue to lead the Republican Conference.”

Thune succeeded Cornyn in 2019 at the No. 2 position in GOP leadership, and the two men are considered the favorites to succeed McConnell in the future.

Cornyn is a former chairman of the National Republican Senatorial Committee and has raised gobs of money for the party. He’s also a sharp-edged partisan who has grown increasingly comfortable defending President Donald Trump, with whom he’ll share a ticket in November.

Stylistically, the lanky Thune is more subdued than Cornyn and more critical than McConnell or Cornyn of Trump’s more controversial statements, though Thune is always gentle in creating any difference with the president. Thune also considered running for president in 2012 and 2016 but decided against it.

“When I look at the presidential race, timing is everything in politics. At the moment, that’s not something I aspire to,” Thune said. He called aspirations of becoming Senate GOP leader “speculative and hypothetical” given McConnell’s lock on the conference. “At the moment, I’m doing what I think I can to help the team and hopefully get some results.”

With neither Thune nor Cornyn overtly maneuvering to succeed McConnell, the majority leader’s path to keeping his job is all the more assured. Whether he’d want to stay on as leader if Schumer becomes majority leader and Biden is president is another question.

As minority leader during Barack Obama’s presidency, McConnell reveled in disrupting the Democrats’ agenda. But Senate majorities can be hard to break: It took McConnell eight years of toiling in the minority before he became the majority leader.

Schumer could also come under great pressure from the progressive wing of the party to end the legislative filibuster, one of the most cherished Senate traditions, which would make the job of minority leader much less pivotal.

Former Majority Leader Harry Reid (D-Nev.) used the “nuclear option” to weaken the filibuster on nominations, and McConnell watered it down even further in the face of steadfast Democratic opposition to Trump’s nominees. With more power to steamroll the minority, McConnell and Trump have embarked on a concerted effort to remake the judicial branch. Trump has gotten two Supreme Court nominees confirmed — due in large part to McConnell’s blockade of Obama Supreme Court nominee Merrick Garland — as well as record-setting numbers of federal circuit court judges.

Under Trump, McConnell has had a mixed legislative record. Thanks to a stunning last-minute move by the late Sen. John McCain (R-Ariz.) in 2017, McConnell failed to repeal Obamacare as Republicans had long promised. There have also been several government shutdowns — which McConnell loathes — including the longest in U.S. history. The federal government’s debt has soared as well, and this year’s budget deficit could approach $4 trillion.

Yet McConnell also was able to shepherd through a $2 trillion tax cut in 2017, as well as several trillion dollars in federal relief to counter the fallout from the coronavirus pandemic. McConnell touts that legislation as a key part of his “Team Mitch” reelection campaign.

McConnell also unabashedly embraces the mantle of being a hard-nosed conservative leader who has turned the Senate into a “graveyard” for bills passed by the Democratic House. And while Trump once openly criticized McConnell for failing to repeal Obamacare, the Kentucky Republican has become his most important ally in Washington despite their many differences in personality.

McConnell helped bring a quick end to Trump’s Senate impeachment trial just four months ago, and now Senate committees are helping to litigate the origin of the 2016 Russa probe — an election-year push Trump has long sought from the GOP.

“He’s probably as good an inside player as I’ve seen in my years here,” said Sen. Richard Shelby (R-Ala.), who has spent more than 40 years on Capitol Hill.