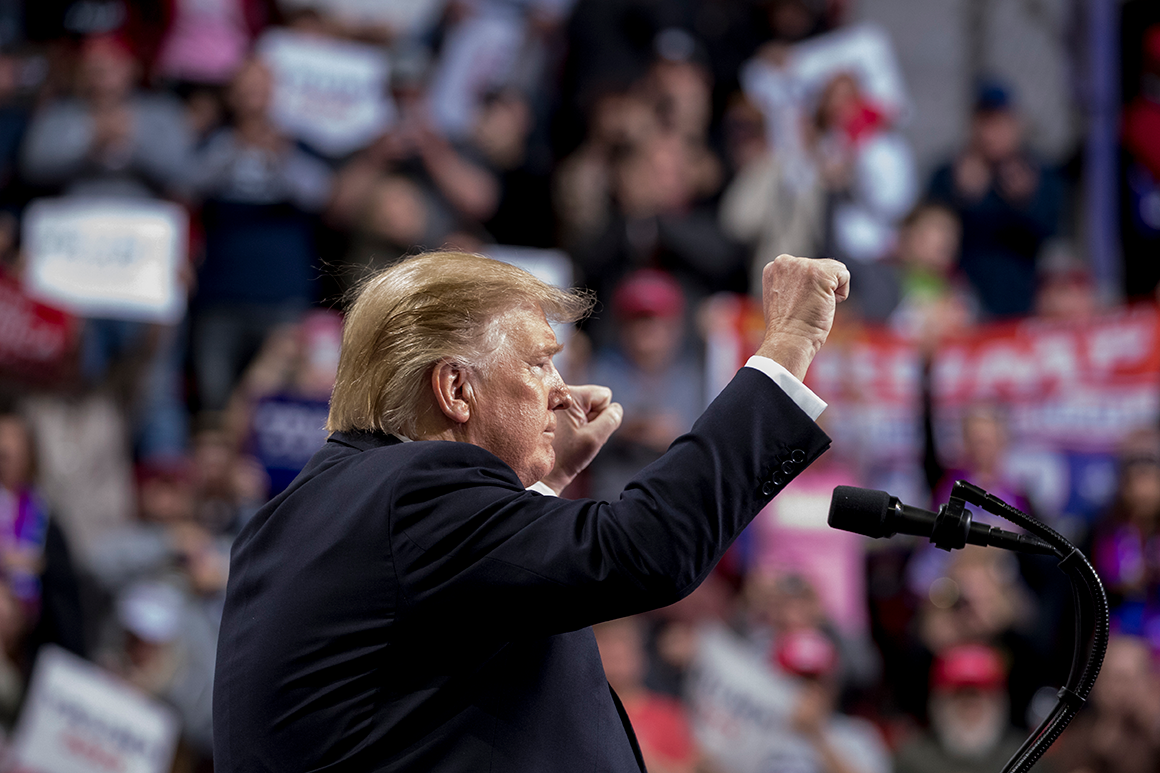 “If Scott [Walker] were your governor, that would not have happened,” Donald Trump said at a town hall meeting in Green Bay on Thursday. “But it did happen, and it was a shame.”

Trump was clearly eager to seize on unrest last week in Madison, where activists destroyed a statue of a well-known abolitionist who had died fighting for the Union in the Civil War, toppled the statue of Lady Forward, a symbol of the state’s progressivism, and beat up a Democratic state senator who was taking their picture.

“And the person they beat up,” Trump added, “was a Democrat who happened to be gay. And he was probably out there rooting them on or something. Because Democrats think it’s wonderful they’re destroying their country. It’s a very sick thing going on.”

That was false. State Sen. Tim Carpenter was not “rooting them on.” He was taking pictures. And he was badly beaten. “This has got to stop before someone gets killed,” he wrote afterward. “Sad thing I’m on their side for peaceful demonstrations—am a Gay Progressive Dem Senator served 36 years in the legislature.”

Carpenter is unlikely to get an apology from Trump, who trails badly in the Badger State (by as much as 11 points, according to one recent poll). In fact, it’s Trump who is likely rooting for more of the same from protesters. In the state’s conservative media, the story of the vandalism has become the dominant narrative, a welcome distraction from the cascade of bad news including a resurgent coronavirus and double-digit unemployment. Republicans would like nothing more than to tie Democrats—and specifically Joe Biden—to radical, left-wing extremism and anti-Americanism. Trump sees it as a path to victory.

For many Wisconsin Republicans, the violence of last week is a flashback to the Walker years when the alleged excesses of mass protests during the fight over the collective bargaining rights of public employees flipped the political script and lead to a string of GOP victories. 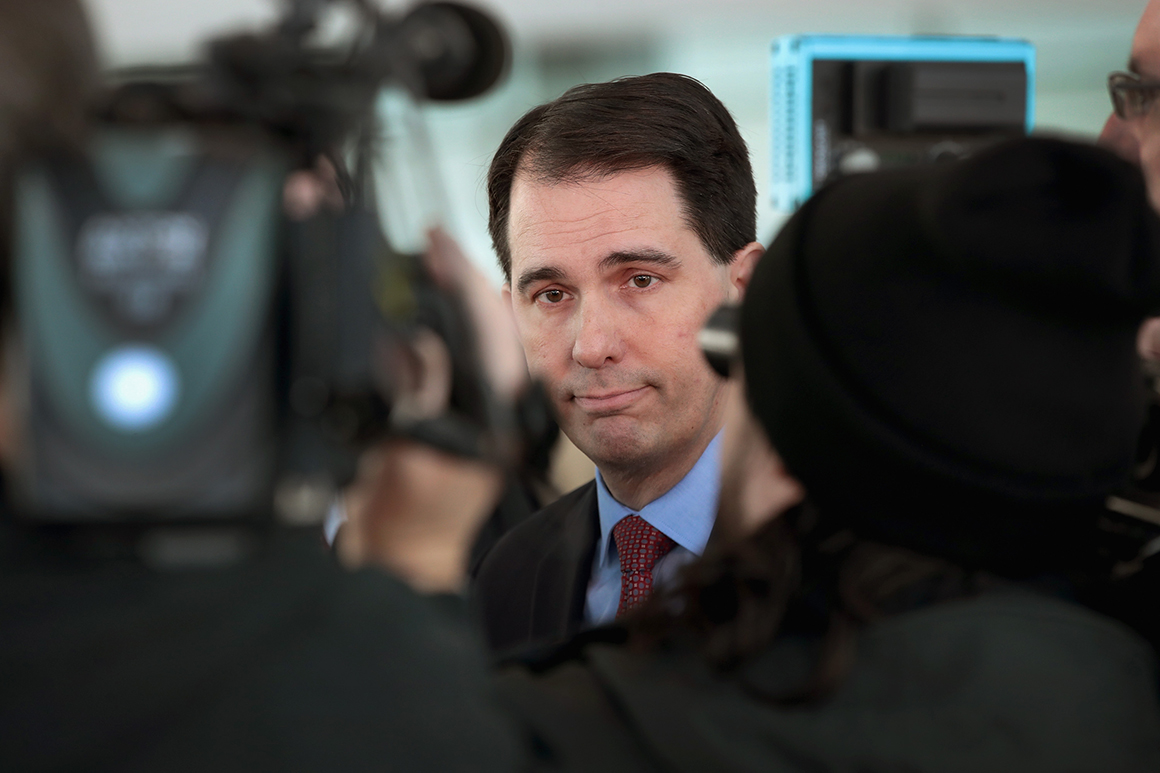 It’s easy to forget now that in the early days of the debate over Act 10, Walker was badly underwater in the polls. Republicans were rattled when a Rasmussen poll in early March 2011 found that Wisconsin voters opposed weakening the collective bargaining rights by a margin of 52 to 39 percent. Another poll showed that Walker would decisively lose a rematch with his 2010 Democratic opponent Tom Barrett. In April, a poll by Wisconsin Public Radio found that 61 percent of the state’s voters thought that public employees should have the right to collectively bargain for wages, while only 35 percent were opposed.

But as the protests swelled, public opinion began to shift. The over-the-top rhetoric and tactics of Walker’s opponents became the issue. While most of the protests were non-violent, Walker later wrote that the turning point in the fight came when protesters targeted his family home in the Milwaukee suburb of Wauwatosa. For many moderate and swing voters, that crossed the line.
So did the protesters who shouted obscenities at a 14-year-old girl who was speaking at a pro-Walker rally.

It hardly mattered that the incidents were isolated, or that most the protests were peaceful. The extreme moments were effectively weaponized (by talk radio hosts like me) and they alienated voters. The next year, Walker survived a recall election against Democrat Tom Barrett by a margin of 52 to 46 percent.

The state’s GOP is hoping for a replay this year.

And, so far, the Madison riots have seemed like in-kind contributions to the Trump campaign.

After the statues of abolitionist Hans Christian Heg and Lady Forward were toppled last week, an Australian media outlet ran a headline reading: “Anti-racism protesters mistakenly topple statue of US anti-slavery leader Heg.” But it was no mistake.

Heg was not merely an outspoken opponent of slavery, he was a leader of an anti-slave catcher militia known as the Wisconsin’s Wide Awakes. And he died fighting for the Union at the battle of Chickamauga.

Protest leaders knew this history and yet they still justified the destruction of the statue, which was beheaded and dumped into nearby Lake Monona.

“The fall of the statues is a huge gain for the movement, though I think that liberal and conservative media outlets will try to represent last night as senseless violence, rather than the strategic political move it really was,” protest leader Micah Le explained. He argued that the two statues falsely portrayed Wisconsin as a progressive state despite its mixed record on the incarceration of Black people.

While state Democrats were quick to denounce the attack on Sen. Carpenter, some progressive were more reticent about coming to the defense of the two statues. One prominent Madison progressive tweeted: “Had time to think/learn from others. Anger is justified, statues symbolic of Madison/Wisconsin’s progressive veneer come down. Protesters don’t need my approval but I think I understand better now.

“Whoever beat up Sen. Carpenter, tho? Not OK.”

Others were even more supportive of the attack on the statues. Nada Elmikashfi, a Democratic candidate for the state senate from the Madison area, tweeted out her support for the destruction, arguing that the “statue of Heg is a monument to a white savior and not a monument to black liberation.” She also applauded toppling Forward, telling the Associated Press: “The symbolism of Lady Forward and that word Forward has really been only for white Wisconsinites.”

This was not, of course, necessarily an opinion shared among progressives, but the loudest voices often set the agenda. Over the weekend, some activists actually escalated their campaign to remove a statue of (wait for it) Abraham Lincoln from the University of Wisconsin campus. The statue of the seated Lincoln atop UW’s Bascom Hill has been an iconic figure for more than a century.

But now, in the wake of the toppling of the statues of Heg and Lady Forward, the Black Student Union and the Student Inclusion Coalition are denouncing Lincoln “because of what they see as the former president’s anti-Indigenous and anti-Black history despite Lincoln’s legacy of ending slavery in the U.S.”

Nalah McWhorter, the president of the Wisconsin Black Student Union, explained: “Just because he was anti-slavery doesn’t mean he was pro-Black.” For Lincoln to be seated at the top of UW’s famed Bascom Hill, he said, is “a single-handed symbol of white supremacy.”

So far, the university is resisting calls to pull Lincoln down.

But the debate has been a welcome gift to the state’s GOP, which has been quick to accuse state Democrats, led by Gov. Tony Evers, of having a feeble response to the violence.

“While the Governor slept in his estate, the statehouse was under siege,” said state Sen. Chris Kapenga (R-Delafield). “We need a leader, not an apologist. Governor Evers and [Madison] Mayor Rhodes-Conway have enabled this destructive and violent behavior through consistent inaction and appeasement.”

Other GOP leaders have been quick to tie the current unrest to the fight over Act 10. “When I presided over the Senate during Act 10,” State Senate majority Leader Scott Fitzgerald said, “we saw crowds of tens of thousands of protesters. Governor Walker utilized State Patrol, game wardens, and other local law enforcement officers to maintain peace.”

And Trump, of course, will try to take advantage of the unrest to portray Democrats as weak and unable to stand up against radical elements. Polls suggest wide support for the goals of the Black Lives Matter movement, and Biden now leads in the polls by a wide margin. But the debate over the statues—rather than a larger discussion of racial justice—is a custom-made distraction for Trump and his backers in Wisconsin.

Trump has already made it clear that the issue of monuments will play a central role in his re-election campaign. On Friday, he issued an executive order to prioritize prosecution of anyone who damages federal monuments. Trump’s language in the order—referring to “rioters, arsonists, and left-wing extremists”—speaks to Trump’s broader desire to exploit any liberal equivocation and drive a wedge in between swing voters and the progressive wing of the Democratic Party.

Of course, given Biden’s record and his efforts to distance himself from the more bizarre demands of the protesters, Trump’s strategy of running against the protests may seem like a long shot.

But in Wisconsin, this may be the Republicans’ only play. And they know that it has worked before.