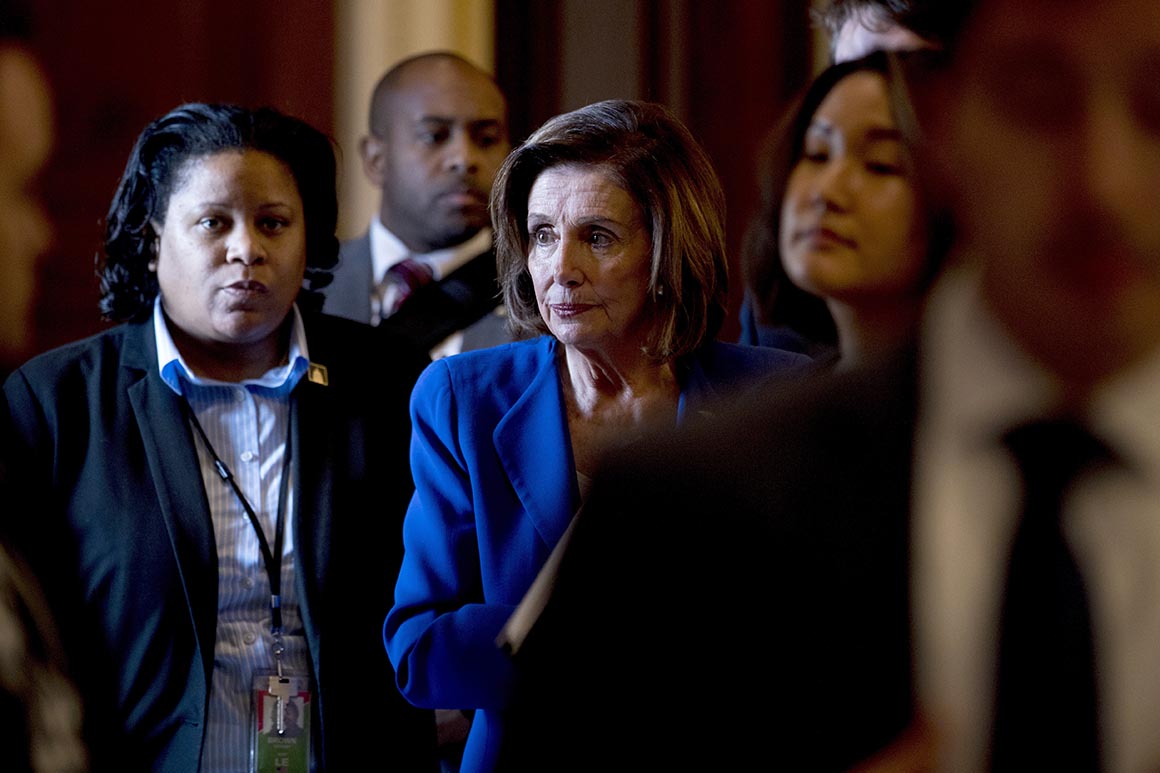 But these aren’t normal times — and as the coronavirus continues to claim more lives each day, Pelosi, like all Americans, has been forced to adjust. That means uncharacteristically staying in one place — right now it’s San Francisco, but Pelosi has also traveled back to Washington to help shape the coronavirus relief bills.

And as a top negotiator in those trillion-dollar talks, Pelosi has worked to hold the line against Trump and Senate Majority Leader Mitch McConnell, demanding to go bigger even if it meant delaying a deal for days as unemployment numbers and political pressure increased.

“When you’re in a war, your first priority is force protection, protecting the troops. Our front-line workers need the equipment they deserve,” Pelosi said of the ongoing negotiations on a private call with her caucus on Monday, according to multiple Democrats.

Pelosi lashed Trump for talking about rushing to reopen the economy — possibly as soon as May 1 — without evidence that the virus will have abated enough to ensure Americans are safe.

“During this period of reflection and the rest, I am really very afraid of what the president may do. He’s not learning from his past mistakes,” Pelosi told Democrats on the call. “He’s talking about reopening — and on the basis of what?”

For a speaker who is used to chatting with reporters throughout the day — in quick hallway interviews as she traverses the Capitol or at the dozens of weekly news conferences she pops into — remaining homebound also means a significant uptick in her media outreach.

In addition to the almost daily television appearances — Pelosi has been on TV more than 20 times in the past three weeks — she’s also sat for half a dozen print interviews and dialed into two radio programs, according to her office.

“Quiet as it’s kept, she’s the one leading the country right now,” said Rep. Karen Bass (D-Calif.), chairwoman of the Congressional Black Caucus, adding: “I talked to her about this the other day, and I told her I was glad to see her in the press more.”

Pelosi is known for her grueling schedule, often working late into the evening and sleeping only a handful of hours a night. She has maintained that hectic pace during the national quarantine, holding multiple weekly calls with her leadership team and caucus that often stretch for hours.

The California Democrat— known for her deal-making skills and ability to control her caucus since first elected to Democratic leadership in 2002 — is facing a new undertaking as a divided Congress confronts a public health disaster and an economic meltdown not seen since the Great Depression.

And despite some private grumbling about the process, Pelosi and her Democratic leadership team, just months removed from the political firestorm of impeaching the president, have managed to keep every one of their members in line publicly.

For the speaker, it’s a multipart mission to keep up the momentum in Congress’ relief efforts as a reeling nation watches on, while controlling a narrative that would otherwise be set by Trump.

“Obviously very difficult if you don’t have a bullhorn like the president has,” said Rep. Kathleen Rice (D-N.Y.), who has been critical of the speaker in the past. But, she said: “Having Nancy Pelosi as speaker of the House in Washington, spearheading where Democrats are coming from, this is a really good start.”

Pelosi must also juggle the delicate dynamics of her caucus — with nervous moderates who have an eye toward the November election in one corner and fiery progressives wanting to challenge Trump on every front in the other.

On the most recent Phase 3 package, House Democrats walked away with a list of wins in the $2 trillion-plus bill, like a massive hospital fund — backing away from Pelosi’s initial pie-in-the-sky proposal to more reasonable demands that the White House ultimately met.

But the speaker’s approach hasn’t been without missteps, according to several of her members.

House Democrats’ proposal for the coronavirus relief bill approved at the end of March included provisions on carbon emissions — which national GOP groups falsely claimed as the “Green New Deal.”

“Throw this bill in the trash that Pelosi filed and get back to work for the American people that are literally facing losing everything if this game goes on longer,” House Minority Whip Steve Scalise (R-La.) said of Pelosi’s proposal, calling it a “far-left wish list.”