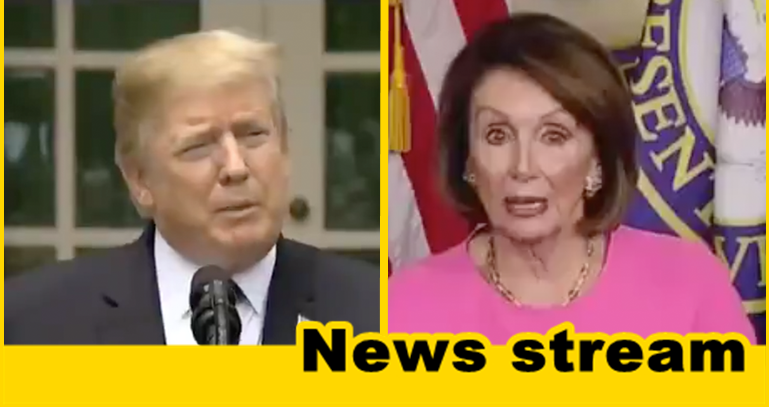 Nancy Pelosi reportedly walked out of a meeting with President Trump after he insulted her as “third rate.”

Pelosi then told reporters Trump has a “very serious meltdown” and “we have to pray for his health.”

According to Chuck Schumer, Trump “was insulting, particularly to the speaker.”

CBS reports top Democrats said a meeting with President Trump and top Republicans on Turkey disintegrated Wednesday, as the president doubled down on his decision to withdraw troops from northern Syria, a decision that has now been condemned by a bipartisan resolution in the House, and by several Republican senators.

“What we witnessed on the part of the president was a meltdown, sad to say,” House Speaker Nancy Pelosi told reporters on the White House driveway after meeting with the president. She later told reporters that she believes “we have to pray for his health because this was a very serious meltdown.”

During the meeting, which lasted less than 45 minutes, the president insulted Pelosi, according to top Democrats who said the president compared ISIS to communists and suggested Pelosi would approve of that.

“He was insulting, particularly to the speaker,” Senate Minority Leader Chuck Schumer said. “He called her a third-rate politician … It was sort of a nasty diatribe, not focused on the facts.” Pelosi later told reporters she believed Mr. Trump called her a “third grade politician.” The White House confirmed that Mr. Trump in fact called Pelosi “third rate,” according to the Associated Press.

However, Republican House Majority Leader Kevin McCarthy contradicted that assessment, and condemned the Democratic leadership for leaving the meeting early. Although he did acknowledge the meeting got heated, McCarthy called Pelosi’s behavior “unbecoming,” and said that the meeting was more productive after she left.

White House Press Secretary Stephanie Grisham also condemned Pelosi in a statement, accusing her of leaving the meeting to “get in front of the cameras to whine.”

“The President was measured, factual and decisive, while Speaker Pelosi’s decision to walk out was baffling, but not surprising,” Grisham said.