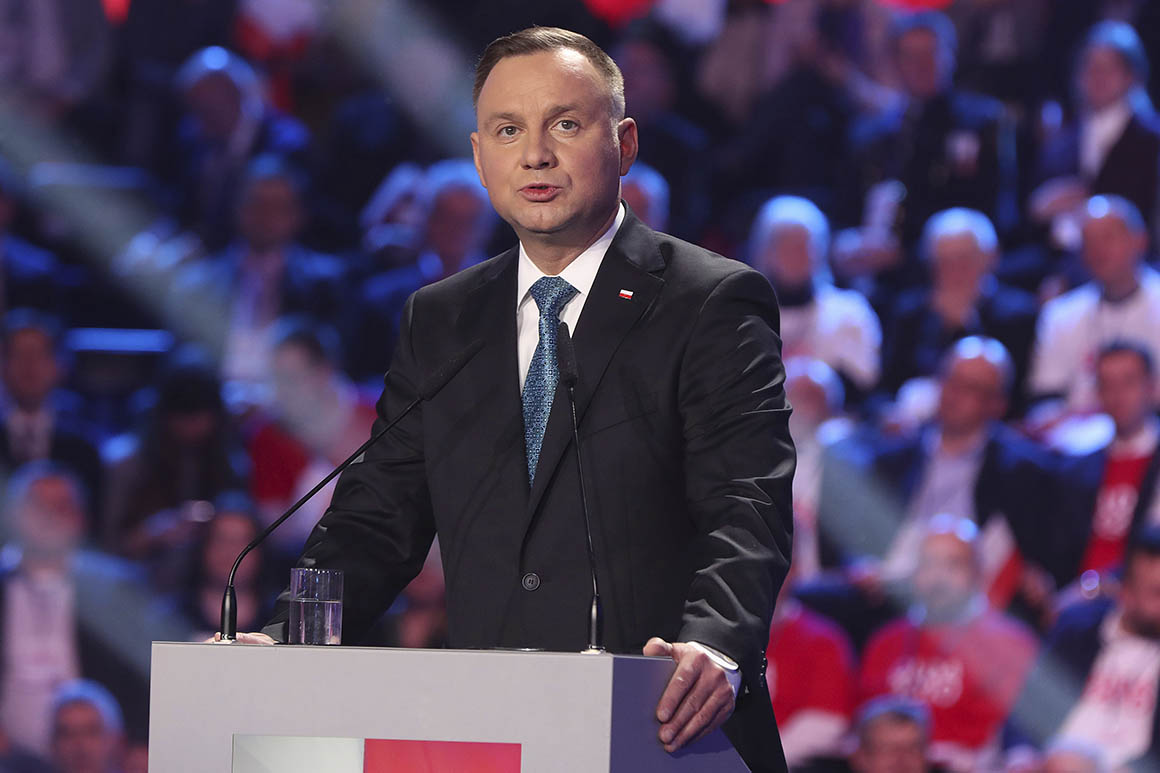 Poland’s incumbent President Andrzej Duda easily won the first round of Sunday’s presidential election, but that doesn’t mean he’s certain to keep his job in the second round vote on July 12.

According to an exit poll released by the country’s major TV broadcasters when voting booths closed at 9 p.m. on Sunday, Duda won 41.8 percent, while liberal Warsaw Mayor Rafał Trzaskowski, representing the Civic Platform opposition party, secured 30.4 percent of the vote. The actual results are expected by Tuesday.

With no candidate winning more than 50 percent, the two top vote-getters are going to scramble to cobble together a winning coalition before the second and final round.

That vote sets up a clash over Poland’s future direction and whether the radical reforms championed by the nationalist, ruling Law and Justice (PiS) party — including sweeping changes to the country’s courts and media — will continue.

Duda’s reelection guarantees that the party will be able to continue policies that have sparked years of conflicts with EU institutions over worries that Poland is backsliding on its democratic commitments and putting the judicial system under political control. Trzaskowski promises that if he’s elected, he’ll veto any illiberal changes. The ruling party doesn’t have the votes in parliament to override a presidential veto.

Duda played up his tight relationship to PiS and its electoral program in his post-election speech.

“Today we have a very clear situation — Poland will either keep developing … or it will wind down … I’m the guarantee of keeping what you have received so far,” he told supporters in Łowicz, a town in central Poland.

That’s an appeal to the generous social policies favored by PiS, including lowering the retirement age and a 500 złoty (€112) monthly bonus for children — policies that have been crucial in building the party’s popularity.

Trzaskowski made it clear that those policies won’t change, and married that to a pledge to build a more liberal country.

"This won’t just be an election only between Andrzej Duda and Rafał Trzaskowski," he said at his post-election event in central Warsaw. "It will be an election between an open Poland and a Poland which is looking for an enemy and a president who seeks to divide."

Although Duda told his supporters that he had won a "decisive" victory, he had hoped to win in the first round. But the election originally scheduled for May 10 had to be postponed due to coronavirus worries and a botched attempt to turn it into a postal-only vote. That gave the opposition the chance to change candidates, and Trzaskowski ran a much more aggressive campaign that helped make up ground lost by the party’s previous candidate.

The fight on July 12 will be very close.

Duda will have to try to move beyond core PiS supporters — people he mobilized with promises of close cooperation with the government, ties to the Roman Catholic Church and with fierce attacks on LGBTQ "ideology." But that will be difficult as he’s so closely identified with the party.

Trzaskowski will have to pull together a broad anti-PiS coalition — especially by attracting the supporters of political newcomer Szymon Hołownia, a former TV host who ran a successful insurgent campaign and came third with 13.3 percent of the vote, according to the exit poll.

Trzaskowski reached out to Hołownia’s supporters on Sunday, helped by Hołownia saying after the election that he "would never vote for Duda."

Trzaskowski will also have to lure some voters from nationalist Krzysztof Bosak, who came fourth with 7.4 percent. His voters might seem a natural fit for Duda, but they tend to be even more right-wing than PiS, and are suspicious of the ruling party.

That didn’t stop Duda from trying to win them over on Sunday.

Duda said there’s not much difference between his and Bosak’s visions of Poland. "We think alike on many issues."

But Bosak’s grouping, the Confederation, issued a statement saying it "will not support either of the candidates."

PiS and Civic Platform — the party founded by Donald Tusk, former Polish prime minister and European Council president — have been warring over control of Poland for almost two decades. The tensions over their starkly differing visions for the country helped drive the turnout on Sunday to 62.9 percent, the second-highest level in the history of Poland’s presidential contests.

This article has been updated to note that the turnout is the second-highest for a presidential election.