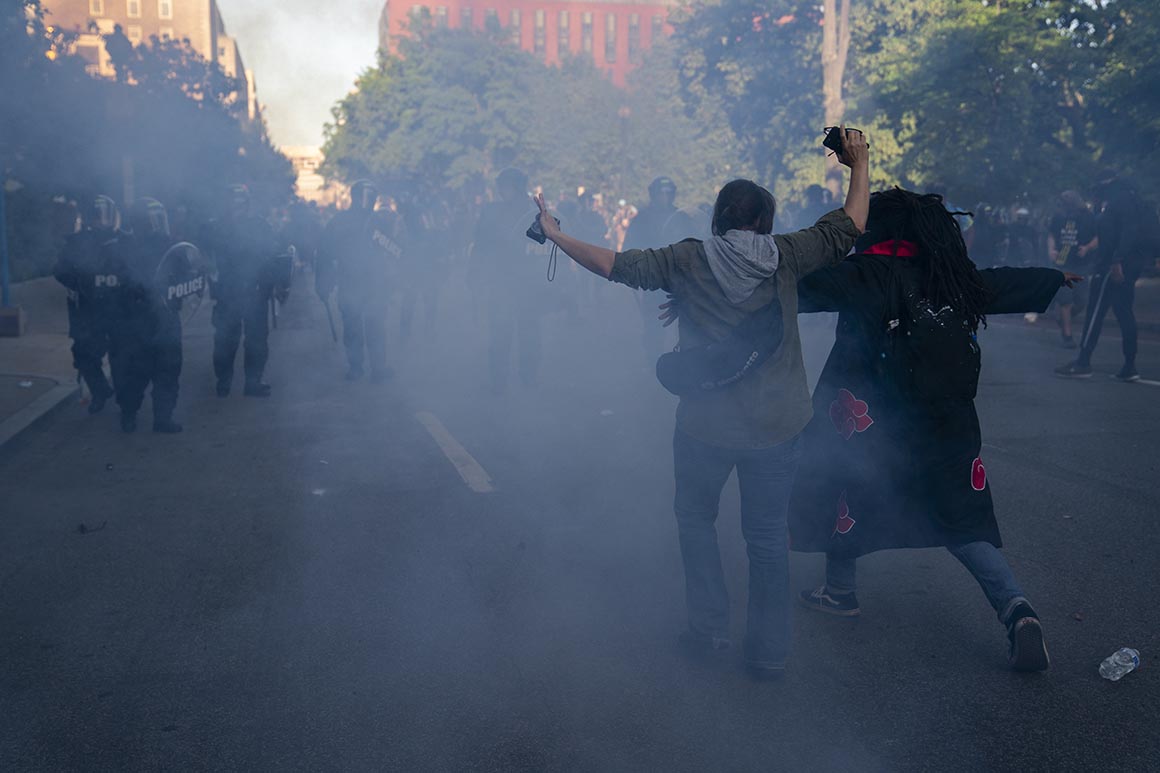 The protesters were taking part in one of hundreds of demonstrations around the country expressing outrage at the death of a black Minnesota man, George Floyd, at the hands of a white police officer, who has since been charged with murder. Numerous recordings shared widely on social media showed unprovoked violence by police officers against peaceful protesters and journalists at protests across the country.

The protesters at the Lafayette gathering say that was the case Monday, as police rammed protesters with shields and batons, and launched smoke canisters, rubber bullets and flash-bangs into the crowds.

Law enforcement charged at the protesters before D.C.’s 7 p.m. curfew, which had been put in place because of instances of looting and vandalism in parts of the city. The protesters list members of the U.S. Park Police, Arlington County Police, Secret Service, D.C. National Guard and U.S. military police in their lawsuit.

The episode caused an international firestorm of criticism against the Trump administration and law enforcement as an abusive display of power and unprovoked police violence. Religious leaders and lawmakers of both parties joined in the condemnation. Former Defense Secretary Jim Mattis sternly condemned Trump in a letter sent to reporters on Wednesday, warning against Trump‘s threats of military response to the protests.

“Donald Trump is the first president in my lifetime who does not try to unite the American people — does not even pretend to try,“ Mattis wrote. “Instead he tries to divide us.“

Police charged the crowd just after Trump declared himself a president of “law and order,” vowing to quash violent unrest that had affected some cities since Floyd’s death. He had also made inflammatory declarations against protesters, threatening to overwhelm demonstrators with federal force.

Later Thursday night, Trump shared a letter by his former lawyer apparently in response to Mattis that referred to the protesters are “terrorists“ who were harassing law enforcement. (Video accounts of the episode showed protesters behaving in a peaceful, if tense, manner).

Kristen Clarke, president of Lawyers’ Committee for Civil Rights Under Law, which is helping represent the plaintiffs, said the descriptions in the letter were demonstrably false and severely condemned them.

“These statements are abhorrent and a completely false characterization of the peacefully assembled demonstrators who were dispersed through state-sanctioned violence at the hands of government officials,“ Clarke said in a statement to POLITICO on Thursday night. “It is remarkable that President Trump objects so vehemently to those speaking out against racial and police violence while embracing gun-toting activists who take siege of government buildings and violent white supremacists who marched in Charlottesville.“