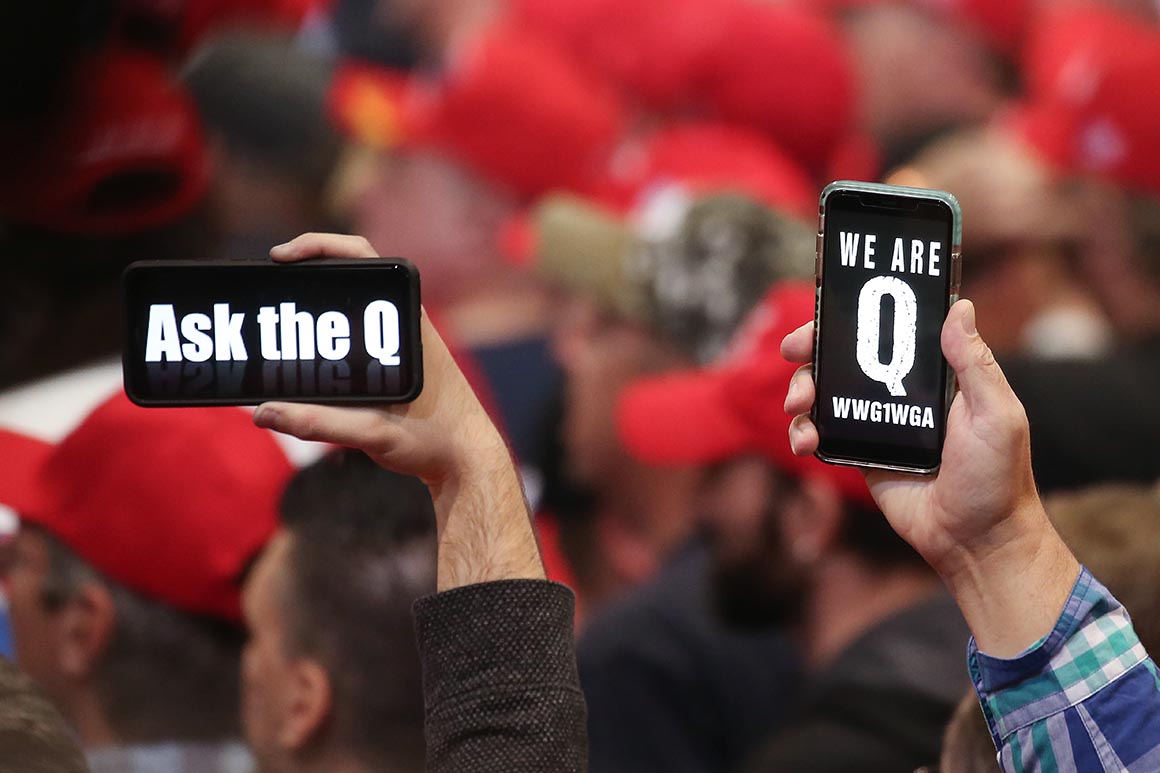 Depending on where one looks, Q-adherent beliefs range from untrue theories that spring from actual events — DNC staffer Seth Rich was murdered by gang members hired by Democratic leaders, the Rothschild family was behind Princess Diana’s death, German Chancellor Angela Merkel is Adolf Hitler’s grandchild — to the arcane and metaphysical. One more nebulous belief: that the most prominent members of this cabal harvest adrenal glands from childrens’ brains and sacrifice them to the Satanic ancient god Moloch. Another alleges that Trump has arrested these evildoers — not physically here on earth, but spiritually, on an interdimensional plane.

The vast majority of Republicans, right-leaning voters, and MAGA-ites — even former proponents of Pizzagate, an early QAnon conspiracy about D.C. sex trafficking — have rejected QAnon. But what was once a group of internet-only evangelists that was more focused on spreading the word of Q by posting videos and memes, is now transitioning offline and onto the ballot — and, perhaps, Congress.

Jack Posobiec, a correspondent for the pro-Trump One America News Network who first came onto the MAGA scene for his Pizzagate promotion, has been sparring with QAnon adherents for years. But prior to this primary season, Posobiec said that they mostly kept their activities to the internet — posting memes, hosting livestreams with QAnon celebrities, and so forth. But Q boosters are now aiming for elected office.

“I can’t tell you what they are thinking personally, I don’t know any of these candidates,” he said in a text message. “But there’s clearly a high degree of self-motivation.

“Maybe they feel they are part of the Plan,” he added, referring to the oft-repeated QAnon mantra to “Trust the Plan.”

QAnon followers have not lost faith in Trump or Q even when the cult figure’s elaborate predictions have not come true — like one that theorized Trump was working with former Attorney General Jeff Sessions and special counsel Robert Mueller to purge the deep state. And to this point, Trump has yet to disavow the group, even as the FBI has labeled it a potential source of domestic terrorism. Across the country, people radicalized by QAnon have been charged with crimes, ranging from attempted kidnapping to murder, inspired by the conspiracy theory.

View, the QAnon tracker, argued that Trump has always gravitated toward groups, like QAnon, that consider him a “Jesus-like figure.” And the belief among QAnon that it has Trump’s covert approval — divined by Q supporters from his tweets and random hand gestures — has turned into political energy.

With Greene, the woman running for Georgia’s soon-to-be vacant 14th Congressional District seat, the political aspirations will likely succeed. Greene is heading into a runoff for the Republican nomination as the clear favorite. And if she claims the nomination, her district is considered a safe seat for Republicans, meaning she would likely be headed to Washington.

Having a Q supporter in Congress will inevitably fan the flames of the conspiracy, even if Greene decides to remain silent about Q or even disavow her previous beliefs, which involve her calling Q a “patriot” back in 2018.

“if you think about it, it’s a whole new pipeline for information that can feed into the Q movement,” said Angelo Carusone, the president of Media Matters, who himself has been the target of QAnon conspiracies. “Because now they have a person in office that has the imprimatur of that congressional pin, who is going to have access to information either that others can’t get access to, or that’s a lot harder for them to get access to.”

So far, the Republican Party apparatus has yet to acknowledge Greene’s promotion of Q theories, and Greene did not respond to a request for comment. But she is not a pariah within the party. She claims endorsements from prominent figures like Rep. Jim Jordan (R-Ohio) and received financial backing from the House Freedom Fund PAC, a campaign vehicle connected to Trump’s chief of staff Mark Meadows.

“I don’t think the party quite understands the Q meme,” Posobiec observed. “They still regard it as ‘some internet thing,’ and in an election year I can understand they have their hands full.”

“Some internet thing” or not, the energy behind Q is unlikely to go away whether or not Trump loses the 2020 election, Carusone said.

While he predicted that QAnon would begin pressuring Trump to carry out “The Plan” and begin his mass purge of the power elite if he won, Carusone worried particularly about what would happen if Trump lost.

“You’ll start to see an increase in questions about the legitimacy of the election, of the outcome,” he predicted. “Increased attacks on the system of voting, a total lack of acknowledgement about the election result unnecessarily. And that’s assuming Trump says nothing.”

If Trump decides to contest the results, Carusone added, he has a captive audience “that have been stockpiling weapons, ammunition and freeze dried food rights to basically fight the battle of their lives against the deep state. Either way, they’re going to say that it’s proof of their argument and the externalities that come from that are not good.”