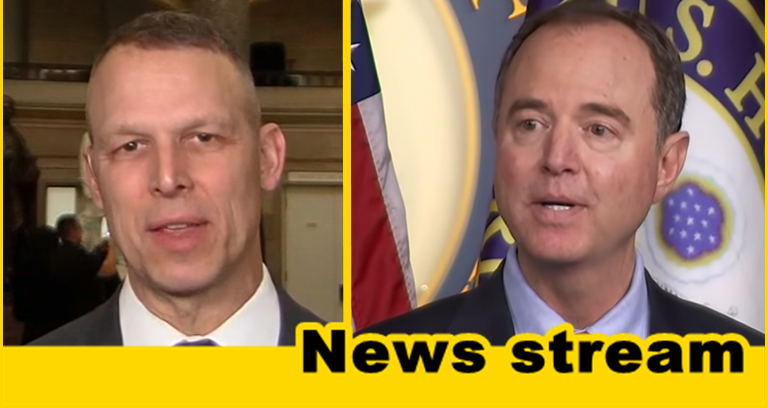 In a new Op-Ed for The Hill, Rep. Scott Perry explains why he believes the comments of Adam Schiff demand his formal censure.

The most solemn duty undertaken by members of Congress is to uphold and defend the Constitution of the United States of America. We swear an oath before the beginning of every Congress. My Oath is something I’ve taken seriously throughout a lifetime of public service – from solider, to state representative to congressman. Unfortunately, leftists in Congress are using their sacred oath to the Constitution as justification to flout the primacy of its principles. We see this no more clearly than in the most recent push to impeach the president.

These rushed, faux impeachment proceedings are shrouded in secrecy. No one knows what the rules are, and it gives liberal members – like Intelligence Committee Chairman Adam Schiff (D-Calif.) – an opportunity to blatantly fabricate facts of convenience and mislead the American people.

That’s Schiff’s M.O. He’s spent the last two years misleading the American people about the contents of the Mueller report. Once hopes fizzled with that (findings: “No collusion, No obstruction”), they’ve rolled out the next phony investigation with yet another forgone conclusion.

To be clear, the impeachment investigation hinges on the accusation that our president would withhold military aid from a strategic ally in the event it failed to provide opposition research on the son of a political opponent. Serious allegations to be sure, but a stretch considering the full context of the president’s conversation with the Ukrainian president.

The “quid-pro-quo” that Schiff and many others allege, never happened. Read the five-page call transcript for yourselves. That conclusion was reiterated in the testimony from Ukrainian envoy Kurt Volker: there was no quid pro quo. It’s why Adam Schiff was so quiet in front of the cameras two weeks ago.

However, Schiff, a master at projection and no stranger to soliciting foreign intervention in American elections, was caught late last year soliciting dirt on President Trump with a caller Schiff believed to be a Ukrainian politician. The caller was actually a Russian radio host and the assertion was a prank. Isn’t Schiff doing exactly what he wrongly is accusing the president of doing? How can he rightly oversee an investigation on the same thing of which he’s obviously guilty?

His own guilt aside, we’ve once again witnessed Chairman Schiff cross a line. During the Intelligence Committee hearing two weeks ago, Schiff, in his opening remarks, lied to the world about the contents of the transcript of the call between President Trump and Ukrainian President Volodymyr Zelensky. Schiff fabricated the contents of President Trump’s phone call with the president of Ukraine, all to promote a fake, partisan narrative. Schiff’s characterization of the call was so egregious, even he had to later call it “parody” after being pressed by Republican members of the committee. Most recently, it appears Schiff has been untruthful regarding his interactions with the so-called “whistleblower.”

It’s obvious Schiff doesn’t care about his oath, the truth or fairness; which is why I joined a group of my colleagues, along with House Republican Leader Kevin McCarthy (Calif.), to offer a resolution calling for the formal censure of Adam Schiff. His comments and actions are reprehensible at best, and certainly beneath his office – and demand a response.

By contrast, Speaker Nancy Pelosi (D-Calif.) has appointed Schiff the lead investigator in the faux impeachment proceedings. His appointment demonstrates that the majority party isn’t interested in the facts, but they are interested in usurping the authority given to the American people. House Democrats will stop at nothing less than overturning the will of the American people and obtaining that power for themselves.

ICYMI @RepScottPerry calls for transparency instead of closed-door impeachment:

“This should actually be a hearing in the Foreign Affairs Committee because we are talking about a diplomat from the United States… the American people should see what's happening here.”